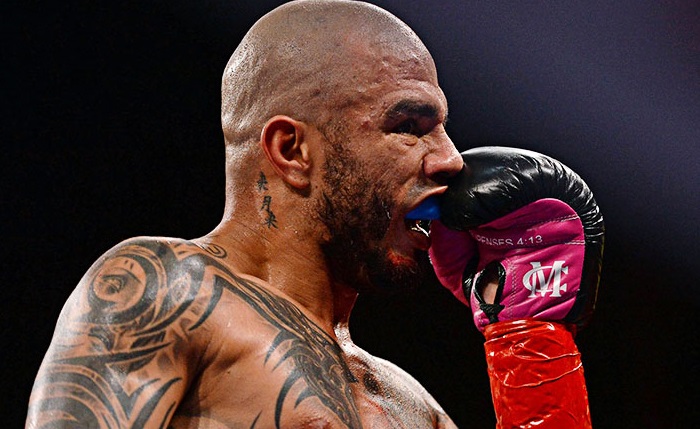 Miguel Cotto is a known ex Puerto Rican  professional boxer. He started competing in 2001 and retired in 2017. Miguel was a world champion multiple times and was the first ever Puerto Rican boxer that won titles in all four weight classes.

It was a great way to promote his country so he was extremely popular because of it. He was pretty popular amongst the nation for his patriotic behaviour, as well.

Miguel was born on October 9th, 1980 by the name Miguel Ángel Cotto Vázquez in a place named Providence in Rhode Island to parents from Puerto Rico. When he was little they relocated to Puerto Rico in the city called Caguas to be precise.

His mother is named Juana Vasquez and his father was named Miguel Cotto so it is obvious that he gained his name from his father.

A lot of his family members were involved into boxing, specifically his father Miguel Cotto and a younger brother named José Miguel Cotto.

José is also a professional boxer and was a regional champion four times during his career. They are very well connected and therefore have trained together. This was a pretty big thing for him and he was more motivated to train when his brother was around.

Miguel also has a cousin Abner Cotto who  was also boxing and he trained with him a lot. Abner is also a professional boxer involved in the lightweight division. Their family altogether is really interested into sports.

Miguel’s uncle is an ex trainer in the same sport and is called Evangelista Cotto so we can say that the whole family was extremely passionate about boxing.

Miguel started boxing very young because he wanted to lose weight. He never knew it would become his actual career in the future. He was training in the Bairoa Gym located in Caguas where he developed into one of the best amateur fighters there.

Miguel went to some international tournaments when he was young because he showed great skill. He was pretty enthusiastic and his coaches often noticed that and therefore put even bigger challenges in front of him, which helped him grow.

Some of them were the 1998 Junior World Championship in Buenos Aires where he won the second place in the Lightweight division and it was a big success for him since he was a very young player.

There he played against Andrey Kolevin from Ukraine, Dana Laframboise from Canada and Darius Jasevicius from Lithuania. He beat all of them and succeeded in his dream. He lost only to a Russian boxer called Anton Solopov that defeated Miguel with a score of only one point difference.

Miguel also competed in the Pan American Games back in 1999, and the games were located in Canada in Winnipeg, Manitoba. There he only fought once and he lost to Dana Laframboise from Canada by the score of 2 to 5.

Miguel was also a part of the Boxing World Championships that was held in Houston in Texas. He also lost a fight against Robertas Nomeikas from Greece.

Miguel represented his country, Puerto Rico in the 2000 Olympic Games held in Sydney. It was a very exciting experience for him since going to Olympic Games was a great oportunity for all athletes.

He fought in the Light Welterweight division with Mahamadkadir Abdullayev from Uzbekistan and he lost the match. After this loss, Miguel decided that he will be going profesional. He ended his amateur career with a really good score, 125-23.

At the beginning of his professional career, Cotto defeated John Brown in the tenth round. In this match he got scores 100-89 twice and also a score of 100-88.

In 2001, Miguel had a serious injury that made him think he wont be able to fight anymore. He had a car aciddent which could have ended his life. He was driving at 5 a.m. in the morning and fell asleep as he was driving, which eventually led him to a heavy crash. He broke his arm and required immidiate care which luckily he received. He managed to recuperate and save his arm from a bigger injury. That meant that he could return to boxing as he wished but had to undergo a treatment.

On September 13th in 2003 Miguel fought and won the match against Demetrio Ceballos. He did a knockout in the 7th round. The match was held in Las Vegas and was highly viewed by all boxing fans.

At the end of this fight Cotto was pretty agressive which made the referee stop the fight with 0:32. After that, the World Boxing Association put him in the first place for his division.

Miguel fought Victoriano Sosa as his first match in 2004. He won in the fourth round by knockout. Prior to this fight, Cotto had some issue with his luggage. He had to wait four hours for it to arrive at the McCarran International Airport in Las Vegas.

He was also almost kicked out from his hotel, the Mandalay Bay Hotel, because people thought Miguel was an unaccompanied minor. This was a very unpleasant experience for him and he sometimes spoke about how he was often found in situations like that because of his Puerto Rican herritage.

On April 8th in 2004 he fought Lovemore N’dou, the former world title challenger in again, Las Vegas. In the first three round none of the boxers had any control and were equally good but Miguel managed to dominate the fourth and fifth round.

Unfortunately, Lovemore N’dou was better in the seventh and eight rounds because he had more precise hits than Miguel. In the last three rounds, fighters were again egually good which made this fight a very close one. Miguel one with scores higher scores.

After he lost to Sadam Ali, Cotto retired as he promised he would. Miguel Cotto had an amazing career of 17 years and retired with 41 wins from which 33 were inside the distance, and only 6 losses.

In 2007 and in 2009, Miguel was seventh on the pound for pound ranking by The Ring magazine. Miguel was a hard-hitting pressure fighter in his beginnings but after a while he changed into a refined boxer-puncher (gradually after he moved up in weight).

Cotto represented his country, Puerto Rico in both the light welterweight and lightweight divisions in many events such as the Pan American Games from 1999 and the Olypmic games in 2000 as well as  the Junior World Championship in 1998 where he won a silver medal in the lightweight division.

Miguel began his career as a profesional boxer in 2001, and at the beginning of it he defeated Kelson Pinto in 2004 and got the WBO light welterweight title. Before he moved up in weight he got six wins while competing with other boxers.

Miguel competed in his first welterweight fight back in 2006, when he defeated Carlos Quintana and got the WBA title. He defended this title four times but lost it for the first time in 2008 to Antonio Margarito. Miguel won it the year later and defended the title once more before he lost it to Manny Pacquiao in 2009.

In 2010 he moved to the light middleweight division and won the WBA title while fighting with Yuri Foreman. Miguel also won the Super champion status and in 2011 fought with Margarito again.

Miguel lost his WBA title in 2012 when he was defeated by Floyd Mayweather Jr. It was one of the most popular fights in the boxing history.

Cotto fought and won a match against Sergio Martínez. He won the unified WBC, lineal, and Ring middleweight titles. He became the first ever four-weight world champion that comes from Puerto Rico.

In 2015, Miguel had to defend the titles but he lost it against Canelo Álvarez. He was inactive for a year and soon returned to boxing. It was in 2017 that he became the  light middleweight champion. Sadam Ali took him his title.

Cotto married Melissa Guzmán in 1998. They have three children together: Luis, Miguel Cotto III. and Alondra. He also has a daughter which was born in 2006 and who he financially supports.

This was a very big affair for him and he almost lost his wife Melissa because of this extramarrital afair he had. It was all over the yellow press and caused his marriage to almost break.

But he often speaks of his wife very emotionally and it seems that he wants his marriage to work.

It is a non-profit organization that fights against obesity and promotes a healthy lifestyle and physical activity which is very important to Miguel.

Miguel also worked with Marc Eckō. He is a fashion designer that owns Eckō Unltd. He wanted Cotto to promote his work within sport because he thinks that Cotto’s fearless attitude shows his clothes in the best manner.

This company produced boxing gear for Miguel. They also did regular clothing accessories that he can wear in public so he was a great promoter for them.

Cotto’s brother whom he loved a lot  died in January 2010. and it was a big shock for him and his family. It was very sad because they were very connected. Miguel was just as hurt when his father passed away and he never thought that his brother will leave him that soon.

Miguel retired in 2017 although he didn’t have to and could of continue boxing but he was always very careful with his money and saved just as his father taught him so now he could retire while he still has his health.

He wants to spend time with his loving wife and his children and focus on helping his community and young boxers from his country.

He still shares his passion about boxing but doesn’t want to lose his health over it. This is a pretty smart decision and a lot of people have supported him when it comes to it.

Miguel has a lot of tattoos and they are not really connected to each other. He has a red Om symbol on his shoulder and a green outline of a place in Puerto Rico on his abdomen.

He added various symbols on his body through the years : a monster with snakes, an eyeball, a cactus, a letter U and many more which are completely uncommon.

He has sleeve tattoos with flowers, frogs, robots and a lot of other symbols and letters which are very unusual.

One tattoo artist said that his tattoo look like his kid picked them from a cartoon and that they don’t seem to have any meaning to its owner.