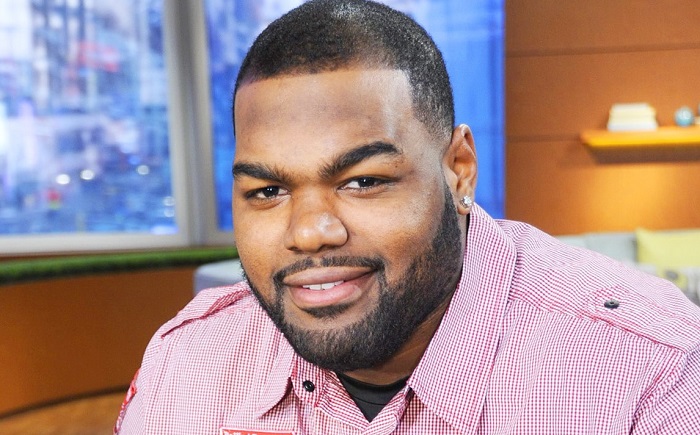 Some stories as so good and unbelievable that they are turned into the movie and people cannot still believe that it happened.

Here we encounter yet another story, where real life is much more interesting than a fiction – here we can see one man who overcame all obstacles that life put in front of him and came out as a winner, not just regarding his wealth, that is around 20 million dollars, but his life in general.

Michael Jerome Oher is an American football offensive tackle, and he is currently a free agent, but it is not so much about his achievements in a sport that remarkable as they are, but his life that made his story so compelling.

Mike played college football for the University of Mississippi, and in the first round of the 2009 NFL Draft, he was drafted by the Baltimore Ravens.

Mike also played for the Tennessee Titans and Carolina Panthers, and all of these contracts are worth millions.

His amazing life story was described in a book that was written by Michael Lewis “The Blind Side” that was followed by the movie in 2009, with the same name. This movie has won an Oscar, and even it took some liberties in its content, it was a movie that truly depicts his life.

Michael was born as Michael Jerome Williams, Jr., as one of the 12 children of Denise Oher who was an alcoholic and suffered from crack cocaine addiction.

She was continuously arrested, even later in life when Mike moved away from her.

Mikes father, Michael Jerome Williams, was no role model for his children since he was all the time in prison.

His father was shot and killed and thrown off an overpass on the west side of Memphis, but the sad thing is that Oher did not find out of his father death until three months after it happened.

Mike lived in such poor conditions that he never had a bed – he lived with 12 siblings. He was often hungry and did not have any close to wear.

During his childhood, Michael did not receive love, attention and care that he was supposed to get from his closest, his family.

He struggled in school, and repeated first and second grades and attended eleven schools during his first nine years as a student.

Soon after when he was just seven years old, Mike was placed in foster care – this was the worst period in his life, he lived in various foster homes, and from time to time he was homeless.

His football career started by accident – he played in his freshman years in a public school in Memphis.

Tony Henderson, who was an auto mechanic with whom he was living temporarily, suggests that Mike applies for admission to Briarcrest Christian School.

Tony was enrolling his son and thought that it would be a great idea if the two boys could go together.

The school accepted Other’s request eventually, and this was the beginning of his football career.

Hugh Freeze and Tim Long couched Mike, and soon after Oher showed how talented he is – he was named Division II (2A) Lineman of the Year in 2003, and First Team Tennessee All-State.

He was rated a five-star recruit and the No. 5 offensive lineman prospect in the country.

Mike was still struggling at this moment since he was living in several foster families.

He stayed with at least five different families that provided Mike with a place to stay after his coaches learned that he was homeless.

But things changed when in 2004, Mike was allowed to live with Leigh Anne and Sean Tuohy, a couple whose children attended Briarcrest.

The Tuohy family find out about Mike after their daughter Collins said that in her class there is one boy that is so quiet – so the father Sean gets to know him and realizes that he was hungry all day.

From that day on, Sean gave Mike money to buy lunch.

Eventually, Anne and Sean legally adopted the boy and helped him in any way they could – they even hired a tutor who worked with Mike all week long.

In order to fix his grades, Mike study with his tutor for hours and hours every day – at least 11:30 every night, six nights a week. His tutor Sue continued to help him while he was on College.

Mike earned All-State honors because he helped lead the basketball team to a 27–6 record, winning the district championship as a senior.

He was a state runner-up in the discus as a senior.

The problems were still his low grades, but he eventually increased his 0.76-grade point average (GPA) to a 2.52 GPA by the end of his senior year. This meant that Mike could enroll in some Brigham Young University 10-day-long Internet-based courses.

In this way, he was fixed his bad grades and finally raised his graduating GPA over the required minimum.

Mike received scholarship offers Louisiana State, Alabama, Auburn, from Tennessee, and South Carolina, but eventually selected to play for Ed Orgeron at the University of Mississippi. He made this decision because this was the university that his foster parents attended.

This decision caused controversy – Mike was under the investigation by the National Collegiate Athletic Association.

They claimed that his grade-point average was still too low to meet the requirements for a Division I scholarship.

But he succeeded since he Oher completed online classes through Brigham Young University.

During his first season in Ole Miss Rebels, Mike started in ten games as a guard, and eventually, he became a first-team freshman All-American.

In 2006 he was shifted in the position of left tackle and was named to various preseason All-Conference and All-American teams.

Mike was named a second-team Southeastern Conference offensive lineman after his sophomore season.

He shows improvement in his academic achievements – he was tested, and his I.Q. score increased 20 to 30 points from the time that he was measured in the public-school systems.

In 2008, in the mid of January, Michael stated that he would enter the 2008 NFL Draft, but he later announced his withdrawal from the draft to return to Ole Miss for his senior season.

When this season passed, Oher made the honor roll for the second time and graduated with a diploma in criminal justice in the spring of 2009.

In 2008, Mike was projected as one of the top prospects for the 2009 NFL Draft. The Baltimore Ravens drafted him.

In 2009, Oher signed a five-year, $13.8 million contract with the Baltimore Ravens where he played as the right tackle and left tackle.

In 2014, Oher was signed a four-year, $20 million contract with the Tennessee Titans.

He played 11 games for the Tennessee Titans and was placed on injured reserve in the December of that year since he missed the previous two games due to a toe injury.

In one year, Mike signed a two-year, $7 million contract with the Carolina Panthers. He was supposed to play a left tackle.

On that same year, in June, he signed a three-year contract length with the Carolina Panthers that was worth $21.6 million with $9.5 million guaranteed. Next year he was released by the Panthers.

Mike is a free agent now, and once he stated that the brain is a scary thing, referring to much concussion that kept him out the remainder of the season.

Besides his tragic life story when he was growing up, there is not much information about his personal life.

He is more focused on his career, or he hides his personal life from the public.

Michael lives in suburban Baltimore, and Leigh Anne, who is an interior decorator and his foster mother helped him decorate the house.

Mike stated that he came a long way from growing up in the projects in some of the roughest parts in Memphis to having his own home that was beautiful and in a rich neighborhood.

As far as his love life goes, little is known’s, beside one incident that occurred in Uber, where it was reported that e followed the car that his wife was in. It was stated that Michael was drunk and that he fights with the driver -allegedly he kicked him.

There are no other records of his wife or girlfriends.

In one interview, Mike said that his mother was never around and that he learned to take care of himself and this was so hard since he has 12 brothers and sisters.

His foster mother, Leigh Ann once said that when she meets him, she had a feeling that he just needed somebody. She and her family was that thing he needed for so long, and this relationship was beautifully described in the movie and book “The Blind side”.

One of the things that could be seen in both movie and book about Mikes life and that made such an impact on all people who know about this remarkable man in his essay that he wrote in his school. It was called “White Walls”, and he spoke in it about the fact that he cannot understand anything that teachers are saying and that he wants to escape that place.

His most famous nickname is “Big Mike” – everyone who knows him, call him this way, in Hurt Village where Mike grew up and at Briarcrest Christian School.

But he said once to his foster mother that he hates when people call him Big Mike.

In one candid interview, Mike said that he moved a lot in his life, but when he moved in with Leigh Anne and Sean, he felt that he was really loved and a part of a family.

In all other families, he felt like they did not want him there, as he said once in an interview.

Leigh Anne’s daughter Collins was a significant support to Mike while he was growing up, she helped him with everything, and her friends accepted him warmly.

Leigh Anne, Mikes foster mother deal with many issues because she took in her home, a black boy that was the same age as her daughter.

But she did not mind, and she told those people to watch their business, and that she does not have any concerns about having a black boy in her home.

Mikes closest friend from his old neighborhood was Craig Vail, a person of trust.

Mike was often a target of racist comments, but he was never silent, he always fights back – on one occasion, he even beat the kid who mocked him, or he usually flips the finger.

Mike is still very close to the Tuohys – and they are devoted to him as well. Whenever he plays, they take a private jet to see him play.

His total Net Worth is approximately 20 million of dollars – this all comes from hіѕ саrееr аѕ а fооtbаll рlауеr wіth ѕеvеrаl сlubѕ.

He is considered to be one of the most рорulаr fооtbаll оffеnѕіvе tасklеѕ іn thе USA.

He wrote several books that were based on his life, that were best sellers. One of which is an autobiography and another is “The Blind Side: Evolution of a Game” by Michael Lewis.

The Blind Side the movie earned more than $300 million, and the leading actress Sandra Bullock won an Academy Oscar and a Golden Globe for her performance as his foster mother.

All of these combined make this poor kid from Memphis into one super force.