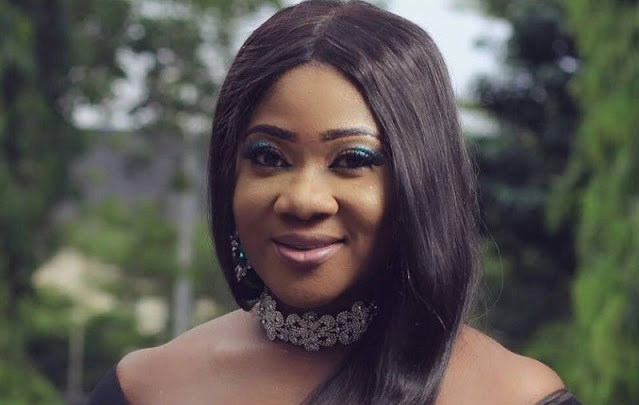 Although not as popular as Hollywood movies, the Nigerian movie scene has much to offer and one of the actresses who got recognized not only in Africa but all over the world is Mercy Johnson.

Her talent is undenied and there is no role she couldn’t handle and play in the right manner so she played in over one hundred movies until today.

She soon became the Nigerian film icon and gained money and fame through her work in the movie industry.

Mercy Johnson is a very young and beautiful actress hailing from Nigeria who is also known as Princess Mercy Johnson Okojie since she got married to Prince Okojie.

She is very popular in her country but also through all African continent and has a very huge fanbase. She would like to become known worldwide, but she doesn’t force it too much since she is still very happy about her roots.

Mercy was born on August 28, 1984, in the city of Lagos, located in the same-named Nigerian state called Lagos.

Her father Daniel Johnson was an officer in the Nigerian Navy Base and her mother stayed as a housewife, taking care of the family.

She is closely connected to them, especially to her mother since she was always by her side when needed although she had many children to take care of and a big household to cope with.

She was born in a pretty big family with seven siblings and being put in the middle as the fourth child. She never lacked her parent’s attention.

Mercy attended a primary school in a Nigerian city called Calabar. The reason for that was her father’s job as a naval officer. His position meant that he could often be relocated and his family always tried to go with him.

Since it was hard for the whole family to relocate her father took Mercy with him to Rivers State.

That is why she had change school and entered the Nigerian Navy Primary School which was settled in the Lagos State.

Her education continued with her transfer to Rivers State Secondary School located in the capital of Rivers State in Nigeria.

She was a student with all kinds of grades but was highly ambitious to become an artist of some kind. She liked watching the movies very much so she became interested in the movie industry pretty soon.

After she finished her high school education she started going to various auditions since she was very interested in acting from her young age.

She failed to enroll in the university since her exam didn’t go well but she firmly decided to get into showbusiness instead and was very stubborn about it.

Her first movie in Nollywood was called “The Maid”. This supernatural drama movie was filmed in 2004 and Mercy had the role of a possessed maid.

She was soon recognized as a good actress and started getting roles in various movies.

It didn’t take long for her to be invited to act in a lot of movies, first in cameo roles and afterward in more important roles.

In 2005 she starred aa Julia in a movie called “Women in Power” alongside Olu Jacobs.

The same year she played the role of Esther in a movie named “Lost to Lust” with Monalisa Chinda and Yemi Blaque. She also starred in “Kill the Bride” in the same year of 2005.

2006 brought her two more hit roles in movies called “Under the Sky” and “Under Control”. She was also hired for a role in a movie named “Thanksgiving”.

She starred as Viola in  “Sweet Mama” which she remembers as a very good experience.

In 2006 she played the roles in “Payday” and “Painfull World” where she starred alongside Desmond Elliot and Ashley Nwosu.

Also in 2006, she has starred with Bob-Manuel Udokwu and Justice Esiri in a movie called “One Bullet”.

She also starred in a movie called “Oath of a Priest” with Benedict Johnson and in Willie Adah Ajenge’s drama movie called “Married to the Enemy” where she starred alongside Rita Dibia and Moses Ebere.

This movie was followed by movies Last Kiss, Endless Night and Emotional Blunder in which she had the role of a woman called Yvonne.

She acted in a lot of movies in 2007, from Twist of Fate, The Last Tradition all to the movies at the end of the year: My Beloved Son, Power of Justice and Keziah.

She was praised for her role as Annabel in Desperate Ladies and the role of Kello in Crisis in Paradise.

2008 was also a very productive year for Mercy since she gained roles in several projects like the Tiger King, Temple of Justice, Soul of a Maiden, Strength to Strength and Act of Faith.

In 2009 she appeared in Tears of Hope, Sound of Pain, Royal Tears, Sexy Girls, Clash of Twins and Beyond Desire.

In 2009 she was awarded an award for the Best Supporting Actress and in 2013 she gained her first Best Actress Award. This great award came to her after her performance in “Dumebi the Dirty Girl”, a very successful movie made in the genre of comedy.

In 2010 she appeared in only one movie and it was named A Cry for Justice. She has the role of Ella.

In 2011 she worked on White  Chapel Weeping Soul, The Seekers, The Code, Mirror of Life and more.

In 2011 she entered the list which brought attention to the fact that she was one of the most popular Nigerian celebrities since her name was the most searched name on Google in Africa.

In 2013 she gained recognition through a movie called “Baby Oku in America”. This comedy movie gained great reviews because of its hilarious plot.

It involves a woman who got pregnant by a man who lives in the United States after which she demands that she has to be taken there and the baby has to be born in America.

But when she comes there she doesn’t adapt and she is behaving very uncivilized.

In 2014 she had starred in a drama movie called “Hustlers” and one year before that she gained the role of a pregnant Nigerian woman who began a new life in the United States. She starred alongside Chet Anekwe and Ani Anitosero in this movie.

She also starred in “Bloody Ring”.

In 2015 she became Lucy in Obi Emelonye’s drama called “Thy Will Be Done” which was produced by Rok Studios and the Nollywood Factory.

In 2016 she starred in Light Will Come and 2017 she was hired for a role in a movie called 16th Anniversary.

She earns a lot of endorsement money from various Nigerian companies which enables her to live very nicely.

As for her personal life, it is known that she is in a happy marriage with Prince Odianosen Okoije who is a respectable chairman, notable politician, philanthropist and the ambassador of peace. He is also a very religious person and a devoted Christian.

Before entering the marriage with the Prince she held the reputation of husband snatcher because it seems that she liked to get involved in romantic relationships with married men.

One of the actresses with whom she worked with even posted a video on Youtube in which she explains how Mercy broke her marriage and left her to raise her kid herself.

Mercy and Odianosen got traditionally married in her home.

Her marriage was controversial at that time since another woman claimed that the Prince is still married to her.

Prince Odi explained that he was never married to that woman legally but since he had children with the same woman he made his children legitimate.

It seemed that she was very eager to get into marriage and didn’t want to wait for this situation to resolve first.

Mercy’s children are Purity Odianosen Okoije, Henry Ozioma Okojie and Angel Okojie.  Purity was born in 2012, Henry in 2014 and Angel one year later.

She posts a lot of photos of her and her children and she considers them her biggest treasure in life.

2018 was a very challenging year for Mercy because she lost her mother Elizabeth who died at the age of 67.

She was also rumored to have serious marital problems which she strongly denied.

The rumors were started because Mercy deleted all the photos from her Instagram account. But it seems there was another reason for the delete and since then they have posted a lot of together photos.