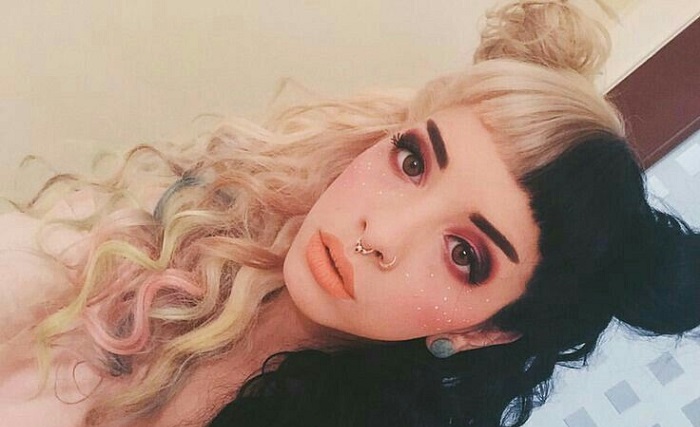 Melanie Martinez is an American singer and a songwriter who became known after her appearance on American TV show “The Voice”.

Melanie Adele Martinez was born on April 28, 1995 in Astoria in Queens. Her parents are of Puerto Rican and Dominican descent.

After a few years, the whole family relocated to Baldwin on Long Island. Since she was only four years old she had no problem with moving.

As a young girl she listened to pop music, to stars like Brandy, Britney Spears, Shakira and Christina Aguilera and soon she decided that she wants to be a singer too.

She went to Plaza Elementary School and always likes to point out how she ha a great singing teacher in school who helped her to become a singer.

She is a very emotional person so she hadn’t had many friends because they couldn’t understand her feelings and her often crying.

So she turned to hobbies which helped her outgrow that problem: he began practicing photography and painting.

When she was 14 she developed an interest in playing a guitar so she taught herself how to play it online.

During that high school period she won a talent show at her school.

In 2012, she entered the MSG Varsity Talent Show and was eliminated in the second round.

That hasn’t stopped her from entering the 3rd season of “The Voice” where she auditioned singing “Toxic” by Britney Spears.

She got very good critics there snd Adam Levine became her coach.

She moved on to the last round of the show called Knockout Round. Finally she was eliminated in the 5th week. Although she hasn’t won she was really glad that she paticipated and went through an experience like that.

After the show ended she started working on her own otiginal songs. She released her debut single next year, in 2014, under the name “Dollhouse”.

She also released a music videos which was funded ny her fans. The video was viewed over one million times on YouTube.

After her success, she signed a contract with Atlantic Records and released an EP called also called “Dollhouse”. Her single from that album called “Carousel” was featured on a TV series “American Horror Story: Freak Show”.

At Christmas she released a single “Gingerbread Man”.

In fall 2016 her fragrance “Cry Baby” perfume milk came to American stores. It was distributed directly by Atlantic Records.

At the end of 2016 she released her second EP called “Cry Baby’s Extra Clutter”.

She started dating  a music producer Michael Keenan in 2015. Melanie confirmed it on Twitter. They are still together.

Distinctive Features: septum piercing, gapped tooth, a tattoo of a bunny on her forearm

She plays a guitar, banjo and ukulele. She is very talented when it comes to instruments.

Kids at school called her “cry baby” due to her emotional state, which she afterwards used on her debut album called “Cry Baby”.

When she was 16, she dyed a half of her hair in blonde after watching “101 Dalmatians” and Cruella De Vill who was dyed the same colour.

When Atlantic Records, her record label, released her perfume milk it was the first time that any label did it.

She hates vegetables a lot. In general, she eats too much fast food.

Her fans are called “crybabies”, which was also her nickname at school.

She is affraid of bees so she tries to avoid going outdoors.

She doesn’t speak Spanish although ger psrents do.

She tries to be different than other pop singers both in looks and in music.