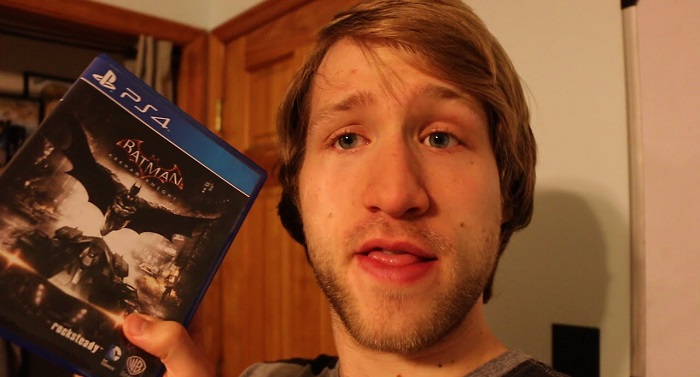 Mc Jugger Nuggets, born as Jesse Ridgway, is an American YouTube personality, actor and director who become famous for uploading vlogs and hand-shot videos of his dysfunctional and violent family called “Psycho Series”, that got audience debating if they were staged or real, and got Jesse over 3.5 million subscribers and more than one billion views.

“Psycho Series” portrayed domestic violence through a story of two brothers fighting each other and their psychotic father, featuring technology like laptops and game equipment being smashed out of pure rage and revenge.

The story of Jesse Ridgway and his families rise to fame is full of twists and turns, mystery, controversy and it’s a story like no other.

Jesse Tyler Ridgway was born on 29th of September 1992 in New Jersey, New York City, USA as the younger of two brothers.

As a child Jesse showed interest in acting and took classes to learn something more about it. He was fourteen years old when he made his first horror video and started his own YouTube channel.

Jesse Ridgway graduated at Rowan University with a degree in Radio/TV/Film studies.

Mc Jugger Nuggets Channel was started on December 2006 showing Jesse Ridgway’s first miniseries “Overachievers”, “The G.A.M.E.”, and “Rule 19” all produced and directed by Ridgway. The miniseries that skyrocketed the channel “Psycho series” was started at the end of 2012.

In “Psycho series” Jesse Ridgway was in the lead role as a manipulative gaming dedicated man-child who defies his father and continues having fun instead of getting a job. Jesse’s father gets angry and violently smashes Jesses stuff in front of the camera. The elder brother Jeffrey Jr, mother Theresa and uncle Larry also get involved in the conflict that leads to viral video headlines and unbelievable TV moments.

Each time members of Psycho Family gets more creative with pranks and anger outbursts: Father axes Jeffry’s laptop, shreds games with a lawnmower; Jesse smashes Dad’s TV, Psycho Father sledgehammers the Xbox One, Christmas tree gets burnt down by Jesse and so on…

The finale of the “Psycho Series” was uploaded on the 6th of June 2016 in two separate episodes. The first one showing Jesse allegedly shooting his father with a gun and the second where it was revealed the whole series that was filmed as if it were unedited spontaneous and honest was in fact acted out by the whole Ridgway family, scripted and directed by Jesse.

Mc Jugger Nuggets got praised for his performance in the series and realistic acting, but many where enraged by the lie and the subscriber count dropped by 15.000.

Thanks to the series Jesse Ridgway was able to pay off his college debt. He started his own company called “RiDGiD Studios”. Even a documentary was made about the Ridgway family and the making of “Psycho Series”, released in April 2017.

Today Jesse Ridgway owns three channels on YouTube generating a collective amount of four million subscribers and 1.4 billion views. Part from the main channel, Jesse owns RiDGiD Gaming Channel and The Psycho Series Channel started as a tribute to the series after it had ended in June 2016.

Considering the show that made him famous was staged and acted out, it is hard to separate real from fiction about Jesse Ridgway’s personal life.

Mc Jugger Nuggets has a very good relationship with his family since they support him and agreed to act in his project.

In 2013 Jesse was in a relationship with Juliette Reilly, but later dated a girl named Kate. Today Jesse regularly posts photos with Juliette and they are apparently together still. Fans speculate they never broke up in the first place and that it was all part of the series plot.

Mc Jugger Nuggets has a net worth of $1.6 million generated mostly from his work on YouTube. He donates money to charities that look after children from abusive families.

Jesse Ridgway got the idea for making the first video of “Psycho Series” from freak out videos of people smashing stuff that were so obviously fake, but very popular on YouTube. Jesse decided to try to make something similar but more realistic.

In a recent interview Jesse Ridgway disclosed that his father, famous as Psycho Dad, works for the government, and was asked questions regarding the videos. Parents wanted to quit the project a number of times because they were shown as violent tempered and weird to millions of strangers, but on the other hand had to keep the truth about it from friends, coworkers and relatives.

Fan comments inspired the development of the story to some point as the plot was mostly made by improvisation and on the go.

Jeffry Sr. broke his leg during the filming and in 2014 Jesse hit his head by accident while making a skit, suffering a major brain injury that got him hospitalized.

All of the technical equipment that got smashed in “Psycho Series” was already broken or and bought online as cheap as possible.

The complete “Psycho Series” has 684 videos and the most viewed video in the series “Psycho Dad Shreds Video Games” has more than 35 million views.

Jesse Ridgway is famous for his YouTube series called “Psycho Series” that featured conflict with his family members, especially his father better known as Psycho Dad. Series that was full of domestic violence and rage outbursts was all staged, acted out and directed by Jesse earning him millions of fans and a substantial wealth.