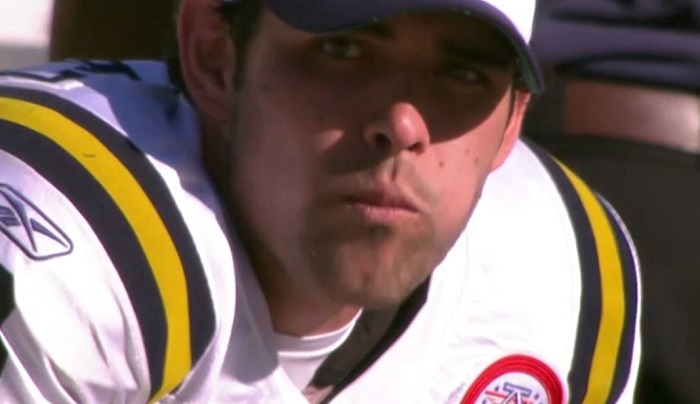 Mark Sanchez is a known Mexican American football player hailing from Long Beach in California who spent the biggest chunk of his successful football career playing for the New York Jets.

Due to his great performance, he was called “the Sanchize”. He got many other nicknames as well, but this was surely the most popular one and the one he goes by the most.

He was born as Mark Travis John Sanchez on November 11, 1986, in Long Beach in California, United States. He doesn’t like to talk about his childhood because there have been some really tough things happening to him during that time. He doesn’t avoid questions, though, and is very open when people ask him about his life.

His parents are Olga Sanchez and Nick Sanchez. His parents didn’t get along very well so they decided to get a divorce. It was at the time when Mark was four years old. This left quite a mark on him since he was separated from his mother.

Although kids mostly stay with their mothers, Mark and two brothers named Nick Jr. and Brandon stayed living with their dad. Olga remained very involved in their lives and childhood upbringing but didn’t live with them.

He moved a lot as a kid so he met a lot of new people. The family lived in Whittier and Pico Rivera which are both situated in the Los Angeles County.

Two years after he divorced Olga, their father Nick relocated to Rancho Santa Margarita where he got remarried. He raised his boys very strictly and firm. He was focused on making them leaders and strong men. He obviously succeeded in that, as much as you can see.

Their father Nick was very strict and gave his boy’s tasks all through their childhood and teen years. They involved both athletic factors and mental tasks and were based on multitasking.

For example, Mark later spoke about his father’s task where he wanted him to learn to multitask and focusing on his senses: he had to do athletic tasks at the same time as mental tasks. That means he had to practice baseball, basketball or train and answer to his father’s questions about multiplication and periodic tables – all at the same time.

His father wanted his kids to develop self-confidence but he was mostly focused on learning them to think fast and to be resourceful.He wanted them to be sure in everything they do in life and to pursue many passions, because they will surely succeed in one.

When Mark became a student of the 8th grade he fell in love with football and spoke about it with his dad since he was not sure which was the best position for him to pick in the team.

His dad Nick spoke to the head coach of Mark’s Mission Viejo High School. They advised him to become a quarterback since they saw his strength and speed which were important to that position.

Mark joined the school’s football team but was also trained a lot by his father in the backyard.

Mark was trained by Bob Johnson who was considered to be especially good in training quarterbacks and was often called „quarterback guru“.

He was responsible for a big success of Carson Palmer and other quarterbacks who made a great career on their positions. The media started to notice him pretty early into his career and this is what helped him move on easier later on.

Bob Johnson saw the perspective in the young player so he tutored him and learned him about a lot of important things and complexed things regarding his position.

Mark became a valuable member of the Mission Viejo’s Diablos and the school ended their 2004 season by having 27 wins and only one loss. The team won the California Interscholastic Federation Championship the same year.

Mark Sanchez became their valuable player and was named as the Player of the Year. In 2005, when his high school education ended, he was already well known to all recruiting services and was approached by a lot of colleges.

He chose the University of Southern California so he committed to them in the summer of 2004 and was going to start playing for them one year later. There was a lot of stress put on him during this decision because he wanted to reach his full potential in studying while still remaining a famous figure in the world of sport.

In 2005 he joined the USC team but didn’t play in all the games, preserving a year of eligibility for himself. Although he played in just a few games he won the award for the Offensive Player of The Year.

In spring 2006 Mark was involved in a huge controversy after he was arrested for sexual assault. He was accused by one female student from the same university. She didn’t file charges later.

He was sanctioned by his team because he had false identification and was drunk when he was arrested and he was still underage.

In 2006 he got his chance to become a starting quarterback after the first choice named Booty had to undergo surgery on his back.

In 2007 he broke his thumb so he had to miss a few games and his season was average, nothing super but not bad.

He started to improve by the end of the season but it wasn’t anything outstanding.

In 2008 he fought for the quarterback position with a new freshman Mustain. This season was good for the USC Trojans since they finished the season with 12:1 score and Mark made a great number of 34 touchdowns.

He became eligible for the 2009 NFL Draft deciding to forgo his last year in college.

After he announced that he would be free for the draft he hired Nick Sanchez, his older brother, to become his agent.

He was soon drafted by The New York Jets. Mark signed a contract with the team for a period of 5 years and worth a very large sum of $50 million. This was the largest contract signed by a quarterback ever in the history of NFL.

He became the starting quarterback in 2009. For his first game, he was named the Pepsi Rookie of the Week. After his performance in winning the Tennessee Titans in the 3rd week of the season, Sanchez became very popular.

But in the following games his play went down and he was criticized. In 2010 he injured his ligaments and had to undergo surgery. It was the season when Mark made his first 300-yards passing in the career.

In 2011 he was named as a team captain but was criticized a lot due to his inability to throw the ball to receivers precisely. It seems that this issue will prolong and that he is not practicing enough to fix it.

He was criticized by his teammates too because they all stated that he has a poor work ethic.

Nevertheless, the Jets extended his contract in 2012. In 2012 he became the target of the fans and the public because of his accuracy issues since he still had a problem with throwing to his teammates.

In 2013 he gained an injury of his shoulder and was later put on reserve. He missed all of the seasons and the New York Jets finally released him in spring 2014.

After that, he signed a contract with Philadelphia Eagles on just one year period.

He improved here a lot and won a lot of games as a starting quarterback. That is why the Eagles made a new contract for him but this time in a period of two years.

In 2016 he became a new player of the Denver Broncos but was released very soon.

Just a little time after the release he signed a new contract with Dallas Cowboys.

He was released from Denver and Dallas because he couldn’t adapt to their play.

In 2017 he signed a contract with the Chicago Bears on a period of 1 year.

In 2018 he became a player for Washington Redskins.

As for his personal life, there is a lot of things to know about Mark.

First is that he is a big fan of musicals which everybody knew and that he presented Tony Awards in 2010 in the category of musicals.

He is also a philanthropist and is involved in the work of several charities.

He became a good friend with the 11-year-old boy suffering from a terminal disease until the boy died in 2010. Mark was happy to help him overcome his last days.

His father is a fire captain and a member of the Orange Rescue team.

His brother Nick finished law school and became an attorney and the other brother Brandon is a mortgage broker.

Nick, the attorney, is also his manager.

Mark didn’t speak Spanish and is the 3rd generation of Mexicans in the US so he learned the language because he was embarrassed about it.

Mark Sanchez was linked to many beautiful women: a supermodel Kate Upton and Hilary Rhoda, Eva Longoria and Lindsay McCormick.

He also dated Alana Kari in 2013 but after that, he decided he will keep his relationships personal so he hasn’t shared any information about it.

It is possible that he is single at this moment.