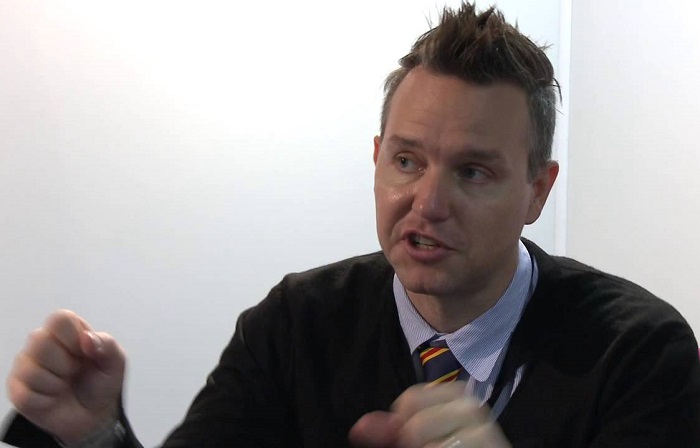 Mark Hoppus is a very skilled and respected American musician and singer who rose to fame through his work with a Californian rock band named blink-182.

He has also been successful in the field of recording and producing music and is known for his work with music groups such as The Matches and Idiot Pilot.

He was born as Mark Allan Hoppus, on March 15, 1972, in the town of Ridgecrest. This city located in Kern County in the district of California is known for its Canyons and archeological recoveries.

His father George Hoppus and his mother Kerry Wernz soon started having marriage troubles and he would often hear them arguing.

He was upset by the notion that his parents don’t care much about each other. They eventually separated so Mark and his sister Anne often moved from one parent to another.

He was eight years old when they separated and Mark took it very hard, feeling lonely and upset. His father worked for the US DOD (Department of Defense) and after the divorce, he took Mark with him to his new home in Monterey.

He spent a lot of time alone during his 5th grade. Music was something he shared with his dad who introduced Mark with his own favorite musicians like Billy Joel and Elton John.

It was in junior high that Mark discovered punk rock. At that time was a student at Annadale High School in Fairfax where he lived at that time.

He got interested in music so he received a bass guitar for his birthday and started going to concerts. This bass guitar was a gift from his father and Mark soon taught himself to play the bass guitar.

At that time he listened to music bands like The Cure and Descendents and his favorite song “Silly Girl” which was performed by The Descendents got him thinking about making a music career.

He made a huge change in his looks after he got interested in punk rock, but his character too. Although he always had all A grades he started skipping school and wear eyeliner with Robert Smith from The Cure being his role model.

He started playing the guitar as a member of a band named Pier 69, which mostly did covers of The Cure. In 1988 he collaborated with the Attic Children and made a demo tape with the band, again making covers.

He returned to Ridgecrest, his hometown in 1989. There he finished his high school education at Burroughs High School. After he graduated in 1990 he created a band together with his two friends.

The band was named “All Things”. They made covers of their favorite songs from Bad Religion and Descendents, but they also started writing their own punk songs.

In 1992, Mark moved to San Diego to go into college. He started working in a music store to support himself and he also went home every weekend to play with his band.

He didn’t like college although he wanted to become an English teacher. That is why he eventually dropped out and started living with his mother who supported him for five years.

He moved to his mum in 1992 and started living with his mum and his sister Anne who was pleased with it. She introduced him to Tom DeLonge with whom Mark clicked the first time they met and started making music.

Both of them liked skateboarding and they did it for hours. DeLonge turned to one of his friends named Scott Raynor who was a drummer and invited him to join his and Mark’s band. They formed a band named blink.

Mark lived with his girlfriend at that time and she demanded that he chose between her and his band and he chose her. But he was not happy with it so he eventually broke up with her and returned to his friends in the band.

In 1993 they started recording their demo taped and gained gigs at local venues. They rose interest in Cargo Music, an independent record label that signed them but put them on a trial basis.

In 1995 the band Blink-182 released their first studio album through Cargo Music. The album was named “Cheshire Cate” and the band even went on a tour after it.

The album received great reviews and the group often attended various festivals and played at clubs.

They even bought a tour van to be able to visit all the places they gained gigs in.

In 1996 they were signed to MCA Records and started working on their second album. Called “Dude Ranch”. The 2nd single released from the album became a hit and they soon became a mainstream band.

They went on the Vans Warped tour but the band members started having problems and this situation led to releasing one of their members the drummer Raynor, from the band.

The band was especially popular in Australia but it was also later certified platinum in the States.

The band hired a new drummer Travis Baker and started working on their 3rd studio album.

They named it “Enema of the State” and it was completely released through MCA Records. The album was produced by Jerry Finn and it gained huge commercial success.

The album was eventually sold in over 10 million copies and three of their singles become hits. “What’s My Age Again?” and “Adam’s Song” was getting a lot of radio play.

They went on their Loser Kids Tour and became recognized as one of the best pop-punk bands ever.

The band released their 4th album in 2001 through MCA Records. It was titled “Take Off Your Pants and Jacket” and had three singles entering the top ten Billboard charts.

The album itself went to No.1 on Billboard 200 chart. It was certified double platinum by RRIA.

The band toured through 2001 and were invited to the Late Show with David Letterman the same year. The band also toured with Green Day which was a huge honor for them.

Mark and De Longe started arguing because Mark was not pleased that De Longe works on other projects too, like Box Car Racer for example.

In 2004 these issues began troubling all the members and the band broke up in 2005.

It affected Mark a lot and he turned to music production. He bought a music studio together with Barker. He worked with Motion City Soundtrack on their 2005 Commit this to Memory album.

He also made +44 album called “When Your Heart Stops Beating” with Mark Hoppus being a lead vocal and Shane Gallagher as the lead guitarist. Travis Baker was a drummer and Craig Farbaugh was the keyboardist. This album didn’t receive good critics and sold poorly.

In 2008, Mark’s good friend and producer, Jerry Finn, died and it had a huge effect on him. Barker also almost died in a plane crash and DeLonge also reunited with them due to the tragical event.

The members reformed their friendships witnessing the fact that life is too short for arguing and not enjoying working together as a band.

They reunited and started touring but had problems due to their busy schedules. Mark worked on a TV Show “Hoppus on Music” and moved to London in the process of album recording so it took more time to do it.

In 2011 they finals released their new album called “Neighbourhoods” which was released through Interscope Records. The reviews were generally favorable and the album went to No.2. on the Billboard 200 chart. It was also popular in Australia and New Zealand. It was certified Gold in Australia.

They released their EP named “Dogs Eating Dogs” in 2012 but not through Interscope independently. They started their tour in Australia in 2013.

In 2013 Mark started his own business by releasing a clothing line “Hi My Name is Mark”.

It was without Harper who feared flying. Tom DeLonge left the band in 2015 and Matt Skiba filled his place.

In 2016 the band released its 7th album titled “California” which had semi-success.

In 2019 he released the band’s 8th album through Columbia Records under the name “Nine”.

In 2019 he formed a new group. The name of the group is Simple Creatures and they released two EP the same year: “Strange Love” and “Everything Opposite”.

During his, career Mark appeared in movies and on TV many times.

In 1999 the appeared in a famous teen comedy movie titled “American Pie”. He sang for a TV movie “Shake, Rattle, and Roll” the same year.

He hosted alongside DeLonge a show on MTV called “You Idiot!” It was in 1999.

In 2011, Mark was invited to be a part of a documentary movie “The Other F Word”.

He has his own podcast named “Hi My Name Is Mark” on the web.

He also hosted a TV show “A Different Spin with Mark Hoppus”. It later became “Hoppus on Music”.

As for his personal life, he got married to a woman Skye Everly whom he met while making a music video. They got married in 2000. They have a son born in 2002.

In 2011 the whole family moved to London where they lived for 3 years. They relocated to Beverly Hills in California in 2014.

Mark is known to be vegan.

He has a wrist tattoo dedicated to his son and wife. He is a huge Trump supporter.