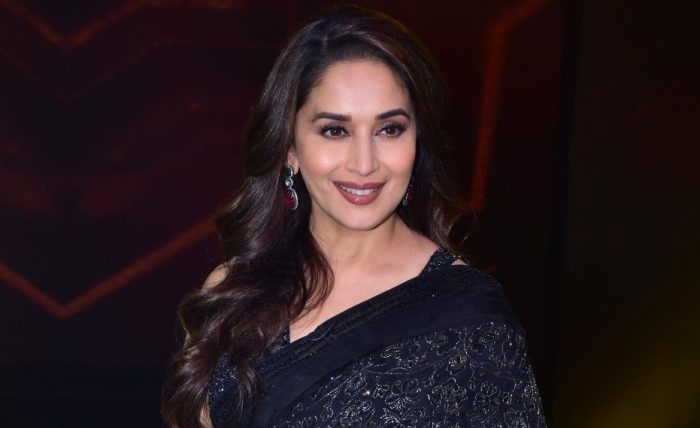 Madhuri Dixit is one of the most popular and most paid Indian actresses who has received numerous Filmfare Awards, and is especially proud for her Padma Shri Award which she received from the Indian Government.

She was born as Madhuri Dixit on May 15, 1967, in the capital city of Maharashtra (one of the Indian states) called Mumba or Bombay. She was born into a family of Shankar and Snehlata Dixit, loving parents of four children. Madhuri is the youngest od her siblings since she has two sisters older than her and an elder brother.

For her young age, she showed a great interest in dancing and she was three years old when her parents spotted her talent. That is why they have enrolled her in dance lessons. She trained the Indian classical dance for 8 years. Its name is Kathak and she became a professional in it. She was nine years old when she received a scholarship because she was a Kathak dancer.

She was only seven when she already performed at various events, such as Guru Purnima festival. She stated that the dance gave her a sense of worth and achievement and it was very important to her when she was a young kid. She went to Divine Child High School located in the town of Andheri.

She was also interested in other activities all extra-curricular from her high-school. Madhuri liked the drama group very much.

As for her career, she liked biology very much and wanted to become a microbiologist. That is why she had become a student at Sathaye college, located in Mumbai.

She was a student of microbiology there but it was not a full year after she decided to quit her studies and pursue her career as an actress since she liked it more.

In 1984, she gained her first role in a drama called “Abodh”. It was a Bollywood movie directed by Hiren Nag where she starres alongside one more debutant named Tapas Paul. The film wasn’t a success itself but she gained very good reviews and she was noticed by other film producers.

In 1985 she also played a role in a movie called Awara Baap but this movie was also a bust.

The same year she was featured on the cover of the magazine titled “Debonair” which is a magazine made for men and it is a kind of Indian “Playboy” magazine.

In 1986 she became the cover girl for a Hindi cinema tabloid called “Filmfare”.

In 1986 she starred in a romantic drama titled “Swati” alongside Shashi Kapoor and Meenakshi She Shadri.

In 1987, she starred in a Prayag Raj’s drama called “Hifaza” and in a Hindi movie called “Uttar Da Kenshin”.

Not one of these movies became a hit or even gained commercial success so she was disturbed because of it.

In 1988 her other three movies she appeared in became a bust: “Mohre”, “Dayavan” and “Khatron”.

1988 finally brought a change in her career with her role of Mohini is an action romance movie called “Tezaalo”. She starred in it alongside Anil Kapoor. This was the biggest hit of the year and it earned her both recognition and a lot of money. She was nominated for the Filmfare Award in the category of Best Actress for her role.

In 1989, she appeared in Umesh Mehra’s movie called “Vardi” which was also a pretty successful movie. She starred with Anil Kapoor again in a movie called “Ran Lakhan”, which also became a great hit and gained her accolades for her role. She starred alongside Mithun Chakraborty in a Bollywood drama movie called “Pren Pratigyaa”. After starring in this movie she gained her 2nd nomination for the Filmfare Award.

Her next movie was one of the biggest hits of the year. It was an action thriller movie titled “Triedeu”. Her next role also brought her accolades: it was a small role but she was considered to be remarkable in it. This drama named “Parinda” was also a hit at the box office.

In 1990 she had been featured in a lot of movies half of them being successful and half being failures.

“Kishen Kanhaiya”, an action comedy movie directed by Rakesh Roshan was her first hit of the year. Her role of Madhu in a romantic movie “Dil” where she starred alongside Aamir Khan. “Izzatdaar”, an action drama, brought her the first Filmfare Award for Best Actress. She was extremely proud of receiving it since she had already been nominated for it several times. This movie was a very high-grossing hit. Her next role in a drama titled “Thanedaar” where she starred alongside Sanjay Dutt brought jer positive reviews and high earnings.

In 1991 she starred in a romantic movie called “Pyar Ka Devta”, which wasn’t received as a hit. Her next role was in “100 Days”, a psychological thriller which had been a great success in the cinema and very well received by the public. The portrayal of Pooja in this movie brought her another Filmfare nomination.

In 1992 she was also praised for her role in Indra Kumar’s drama movie called “Beta”. This movie was a huge success which gained her a new Filmfare Award, second in a row.

This movie was different for her because she danced the “Dhak Dhak” dance and her performance of it was considered astonishing and this dance brought her a new nickname: “Dhak Dhak Girl”.

In 1993, she starred in a crime movie called “Khalnayak” alongside Sanjay Dutt and she was praised for this role since she starred a police officer going undercover. She was called a heroine. She was again nominated for the Filmfare Award.

In 1994 she started collaborating with Shahrukh Khan and their first collaboration was in a thriller named “Anjaam”. This brought her the 7th nomination for the Filmfare Award for the Best Actress.

Her next movie was a family drama movie called “Hum Aapke Hain Koun…!” Where she starred with Salman Khan and this movie was a worldwide hit which broke 20 years old record for the highest-grossing Bollywood movie ever. Her role of Nisha gained her the 3rd Award for the Best Actress.

Her next praised performance was in Indra Kumar’s drama movie called “Raja” where she played the role of Madhu and falls in love with a man played by Sanjay Kapoor.

In the next movie called “Yaraana”, she starred with Rishi Kapoor but this movie didn’t become a hit.

In 1997 she received accolades for her role of a village woman in “Mrityudand”, a Hindi drama movie directed by Prakash Jha. Of her three following movies called Koyla, Mahaanta, and Mohabbat only Kayla was a success.

In 1997 she gained Filmfare Award for the role in a musical drama called “Dil To Pagal Hai”. This movie became the 2nd highest-grossing movie that year.

In 2000 she starred alongside Anil Kapoor in an action drama movie called “Pukar”. The movie was a huge hit. Her next role was in “Gaja Gamini”, directed by M. F. Husain who is originally a painter.

In 2002 she starred alongside Shahrukh Khan and Salman Kahn in a movie “Hum Tumhare Hain Sanam”.

Her next release was a romantic drama called “Devdas” where she again starred alongside Shahrukh Khan. The film was featured at the Cannes Film Festival in 2002 and was a huge commercial success.

She has received an award for her supporting role in this movie.

In 2007 she returned with a lead role in a dance movie called “Aaja Nachle”. Dixit gained positive reviews for her roles but the movie was a failure at the box office. In 2011 she received a Filmfare Award for her long career in the film industry: 25 years.

The same year she gained a role in a black comedy called “Dedh Ishqiya”. This role brought her a new Filmfare Award.

Her next role required her to practice Kung Fu. It was for “Gulaab Gang” directed by Soumik Sen.

In 2018 she was a part of the cast of “Bucket List” a comedy-drama which brought her good reviews.

In 2019 she starred in Indra Kumar’s movie called “Toral Dhamaal” where she starred alongside Anil Kapoor. It was a high-grossing movie with $29 million earned. Madhuri also produced a drama “15 August” for Netflix.

Her next performance was in a drama “Kalank”, alongside Sanjay Dutt and Alia Bhatt.

She had a lot of performances outside movies. She performed in concerts “Madhuri Dixit Live” in India and the US. She was a part of 40-days show called “Unforgettable World Tour” where she performed alongside many other actors. It was in 2008.

In 2013 she performed with Shah Rukh Khan and Deepika Padukone in a Dubai concert named “Access All Areas”. She was also one of the performers at the “SLAM!” In 2014.

In 2015 she visited Houston through a tour called “Fusion”.

In 2018 she was honored to perform st the ceremony for “Men’s Hockey World Cup”.

As of 2013, she owns her online dance school called “Dance With Madhuri”.

She has also been acting in various TV series, from “Playing Guest” to others at Life OK TV Channel. She was a host of a cooking show called “Food Food Maha Challenge” but she became more known as one of the jurors in “So You Think You Can Dance” show.

She has been involved in a lot of philanthropic activities, from AIDS prevention, promoting education and woman rights.

After winning a game show called “Kaun Banega Crorepati” she gave all the money she won to the Victims of an earthquake and to one orphanage which was considered very generous.

She supports PETA in India.

She has become the Ambassador of Goodwill for an organization called “Emeralds for Elephants” which tries to preserve Asian elephants frim distinction.

In 2014 she started her collaboration with UNICEF where she strongly fought against child labor and trafficking.

Government of India has appointed her as an ambassador of campaigns oriented towards women safety and child campaigns.

She is considered a very influential woman due to her activities in different areas of life. In 2000 she entered the Guinness Book of World Records as the most paid actress in India.

In 1990 she started dating Sanjay Dutt but their relationship ended in 1993 when Sanjay was arrested. In 1999 she married her longtime boyfriend Shriram Madhav Nene. He is a cardiovascular surgeon who lives in L.A. and with whom she has two sons. They are named Anin and Rayan. She has lived in Denver until 2011 when all her family relocated to India.

She has endorsed many brands like Nestle, Lux, Vogue India, and Neesa. he is a big fan of Meryl Streep and her favorite dancers are Gene Kelly and Hema Malini.