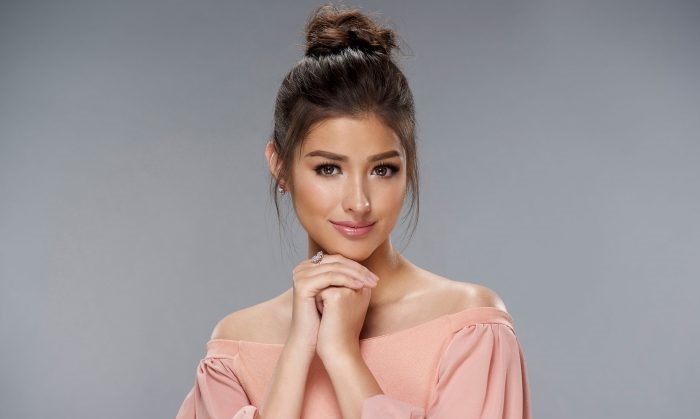 Liza Soberano is a very young and extremely popular Filipino-American actress who had played many movie and series roles but gain fame through her work in a comedy series titled “Forevermore” in which she starred alongside Enrique Gil.

She has started her career as a model but she quickly became a role model of young teenagers.

Liza Soberano was born as Hope Elizabeth Soberano on January 4, 1998, in the town of Santa Clara, located in the state of California, in the United States.

She is part Filipino since her father John Castillo Soberano comes from a place called Pangasinan, and her mother, Jacqulyn Elizabeth is an American born.

Liza grew up in California and had spent most of her childhood living with her grandparents because her parents got divorced while she was still very young.

She has a younger brother whose name is Justin David.

She was only ten years old when her father took her back to the Philipines, to Manila, where she continued living with him and his relatives who all took care of her.

Both of her parents have children from other marriages so she has a lot of Half-brothers and half-sisters from both sides of the family. They are named Nathaniel, Leilani Sue, Dustin David, Jaden Parker, Kaycee Logan, and Rianne Love.

She was a pupil at St. Patrick School in Metro Manila in Quezon City. She enrolled in the Southville International Online Business School.

She was very young when she was noticed by a photographer in manila nad was offered a modeling job. Her father agreed and her career as a model started at her young age of twelve. She appeared on printing ads.

One year later she was spotted by a person who recruited talents and she soon met a talent manager named Ogie Diaz.

He is still her manager and they have a good collaboration. Ogie recognized her talent and realized that he has a chance to make her a star.

He is a person responsible for her knowledge of Tagalog. He convinced her to learn the language better and to be fluent in it so she eventually did it and this enabled her to get better roles on TV and movies.

In 2011, she managed to land her first role. It was in a TV series called  Wansapanataym. She appeared in just one episode appearance of this fantasy drama where she played the character named Mac.

After that, she gained a small role in a romantic melodrama TV series which was eventually aired in more than 150 episodes. It was in 2012 and it helped her launch her career.

She became noticed for her role as Angel in the movie “Must Be… Love”, directed by Kathryn Bernardo.

In 2013 she appeared in several projects like She’s the One alongside a very popular young talent Enrique Gil. In  2014, she appeared in a television series titled Got to Believe.

Her big breakthrough came with the new romantic series called “Forevermore” in 2014.

She gained the leading role of Maria Agnes in that romantic comedy TV series, where she starred again alongside Enrique Gil. This series brought both of them fame and they have become the main interest of media.

The media also started sharing rumors that the two of them are a couple so they often wrote stories about them.

The popularity she gained through this series brought her new roles so she gained a role in a movie called The Bet which was later renamed Just The Way You Are and released in 2015.

In autumn the same year Liz again starred alongside Gil in a romantic movie called Every Day, I Love You, which was directed by Mae Cruz-Alviar.

At the beginning of 2016, she played a role of Serena in a romantic comedy TV series named Dolce Amore.

This story of an adopted child who feels something is missing in her life also brought attention n her. She mentions it as a great experience because she had to be very emotional during filming to be convincing.

The same year she landed this role she was offered to become the new face of Maybelline cosmetics which she, of course, accepted because it brought her big financial benefit and made her widely known over ads and commercials.

2017 was the year that brought her a new role with her old partner Enrique Gil. Both of them appeared in leading roles of a comedy romance movie called My Ex and Whys.

The movie was highly anticipated by the public and it earned a huge amount of money on the first day it was released to the cinema. That fact brought he movie the Box-Office Entertainment Award.

In the summer of 2015, she appeared on the “29 Most Bright & Beautiful” list published by The Philippine Star Lifestyle Magazine. She was very surprised about it because she thinks there are many more beautiful women than her.

In 2017 she was named to be the most popular endorser of that year. she was also often named as being one of the most beautiful TV faces in Philipines.

She doesn’t mind it but she claims that she would like more to be remembered for her talent and not her beauty.

The number of companies she endorsed was huge. she has signed endorsement deals with companies like  Nestea, Coca-Cola, Nescafe, Palmolive, Olay, Avon, Vans Philippines and much, much more.

As for her personal life, nobody was surprised when she announced in 2019 that she was dating a fellow actor Enrique Gil for five years. Nobody who watched their movies together couldn’t miss out on the chemistry between the two of them.

This brought a lot of confusion in her young heart and mind, especially because Enrique was a good friend to her before he became her romantic partner.

In 2015, Liza turned to a known personal trainer from New Manila named Bok Santos. She wanted to get in shape and get healthy, also trying to be fit for some more demanding roles.

In 2018 she had to prepare for her role in an action movie called Darna where she was offered to have a double but she preferred to be ready to do her own stunts.

Liza is well aware of how important water is for her so she takes plenty of it to maintain good hydration all day.

When asked about her role models and women she admires she always mentions  Audrey Hepburn and Gigi Hadid.

She says that ambitious women have always been a very important thing in her life and that she is always very motivated by them.

Although she is not overwhelmed with luxury brands she is especially fond of  Christian Dior and his fashion. She says that there is something in the way that he creates his clothes that fits her very well.

When she is not eating Filipino Food (and her favorite meal is Sinigang), she likes to eat all Italian food. She is a big lover of pasta and dough, and many people say that they could never guess this.

One of the celebrities who follow her on Twitter is Justin Bieber, which means a lot to Liza.

Liza is also a fan of rapping and he often does it at home. It is a relaxing method that lets her be creative and have a lot of fun without getting too sweaty.

Liza is very close with her family members and thinks she has a responsibility towards them so she often helps them in any way she can.

She bought herself a beautiful home where she lives with Enrique today. She also bought her father a car.

Liza is very selfless and likes to help people in need. It was on her 18th birthday that she made a huge donation for several charities, from the ones which help children to others that help people with cancer and people who live in poverty.

Because of her beauty, she is often at the top of several lists of the 100 Most Beautiful Faces.

Liza is already an aunt because her brother Justin became a dad in February 2019. She has a beautiful niece now and she is very happy about it.

She had a serious talk with her brother after he told her that his girlfriend Chloe is pregnant because she wants him to be a responsible father.

She says that this is something she is very worried about and she wanted to know that he will make sure they are all safe at all times.