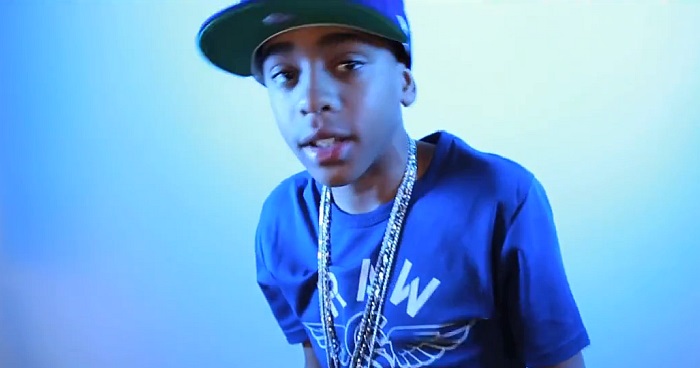 Lil Mouse is a known young American rapper from Chicago who became known for the controversy that rose after releasing his mixtape in which he showed his drill style of rapping with lyrics about violence, drugs and sex when he was only 13.

Lil Mouse, whose real name is Mouse Myers, was born on January 19, 1999 in Chicago, Illinois in USA.

He never finished school from which he was kicked out. Since he was very violent at school, as a member of a gang group called “Gangster Disiples”, trying to get himself more notorious, he assaulted an 8 year old kid when he was in the 3rd grade. He accused the boy for snitching and he threatened him that he will kill him if he confirms that the kid is a snitcher. Teachers were oftenly triggered by his atittudes and they claimedd that he should be put in counseling.

Due to his violent behaviour and bad attitude he was kicked out of school which he never finished.

In 2010, at the age of 11, he was already charged for a very serious act: for aggravated assault. The charges was dropped since the witness of the attack was discredited and the media claims that the whole scenario was probably set up and the witness was perhaps threatened.

In 2012 he decided to release his first mixtape called “Mouse Trap”. It didn’t raise too much interest until he put the video for one of the songs on the tape called “Get Smoked” on Youtube. After that, a known rapper Lil Wayne put the same single on his “Dedication 4” mixtape the same year.

The video and the song made a lot of controversy about whether is it normal for a boy at her age to have such violent videos and notorious lyrics. However, the controversy gained him views and fans so he grew his audience quicker.

About the same time, Rhymefest, a known Chicago rapper, stated that it is wrong for a 13 year old boy to rap about guns, violence and sex. He said that Lil Mouse isn’t mature enough to realize how serious is his rapping.

His face finally ended on the cover  of The Chicago Sun because of the rising question whether is his singing, rapping and acting a form of a child abuse.

Lil Mouse had a long feud with a rapper named Cassidy, which ended in two of them falling into a rap battle from which Cassidy came out as a winner.

He also entered into a fued with a rapper Young Pappy and they dissed one another for a while. After some time Young Pappy was killed and Lil Mouse showed no mercy for him not even after his death.

He hasn’t shown at his funeral and even recorded a track in which he stated that Young Pappy got what he deserved.

At the age of  16 he began a fued with a white teen rapper Slim Jesus which began on Slim Jesus’ initiative.

His father was in jail many times so many of Lil Mouse’s critics claim he had no role model to look up to.

If we are to believe that his lyrics were all true stories we would discover that he had a very tough childhood and he was often  beaten by his father. He was even kicked out of home by his mother and for a while one teacher took him under his wing and Mouse lived with him.

Distinctive Features: his name Mouse tatooed on his right forarm

Lil Mouse made it to Top 10 Most Controversial Music Artists in 2013, which was quite an accomplishment for a young teenager as him.

His favorite sport is baseball and his room is full of baseball trophies because he was really good at it.

In his free time, he likes riding motorcycles and every vehicle on four wheels but unfortunately he likes it to be dangerous too.

Lil Mouse is a controversial teenage rapper from Chicago who earned over a milion dollars by rapping “drill” music from his early age. He is considered as a promotor of violent and explicit rap.