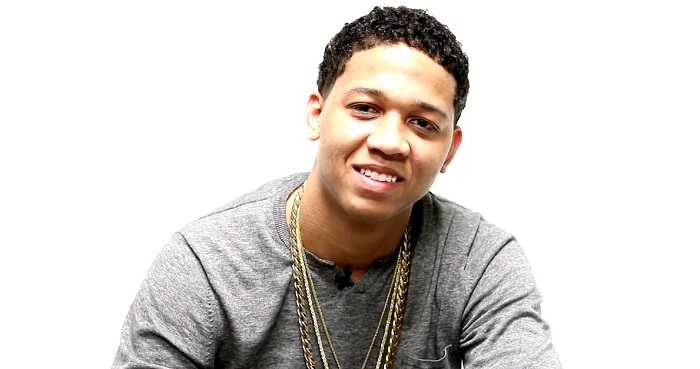 American rapper Lil Bibby is known for his mixtape titled “Free Crack” and its two homonymous follow-ups. The 23-year-old recording artist from Chicago, Illinois has released a series of successful mixtapes and collaborated with big-name artists.

This article follows Bibby through ups and downs of his career from the dangerous neighborhoods of Chicago that raised him to the big lights of the music scene that recognized and awarded Lil’s deep memorable voice. As a bonus we also talk about his net worth.

Lil Bibby’s real name is Brandon George Dickinson Jr., born on the 18th of July 1994 in Chicago, Illinois. He grew up in the East Side of Chicago, around 79th Street.

Brandon had a rough childhood, witnessing violence every day. He even got shot at several occasions. His mother struggled with drug addiction and his older sister, who practically raised him, was in a gang at the time. Also, some of his friends went to prison. For consolation Brandon turned to music, and at 16 began recording his own songs.

Brandon got his nickname while playing basketball at the local youth center. His skill with the ball reminded teammates of Mike Bibby, an NBA player who helped the Wildcats win the NCAA title. Brandon had a similar jump shot as Mike, so friends often called him Lil Bibby.

At the same youth center Lil met his friend for life and big brother Lil Herb, known as rapper G Herbo, with whom Bibby started recording songs in the first place.

In 2013 as a 19-year-old aspiring rapper, Lil Bibby released his debut mixtape through Grade A Productions. Tape titled “Free Crack” was inspired by Kanye West’s song “Crack Music”, and was also influenced by Drake and Jadakiss, Bibby’s favorite rappers. It was a major success, praised from critics and the media, and Bibby soon appeared on the cover of Vibe Magazine.

A year later, his second mixtape was released, hosted by DJ Drama, with several guest artists such as Wiz Khalifa and Juicy J. It was regarded considerably more successful than the first and got downloaded around 350,000 times.

Bibby closed the series after “Free Crack 3” got mixed reviews from critics although big names like Metro Boomin handled its production. “Free Crack 3” got released in November 2015 and was equally loved by the public as all the titles in the series. Bibby in total published four mixapes, the fourth called “Big Bucks” came out in August 2016.

Bibby collaborated with many known artists during his career, either appearing as a guest artist or working on the songs behind the scenes. In fact, the best known work of his discography is a song Lil Bibby has co-written for a fellow rapper Juicy J – the hit track from 2014 called “Low”. On the US Hot R&B and Hip Hop Songs Chart, this song made it to number 44.

Lil Bibby has been in a relationship with American model Johanie Taylor since the beginning of 2016. They confirmed the relationship after a video clip of the couple asleep surfaced on the internet in January 2016. Bibby immediately made it clear that it was not a casual fling, but that he is actually dating Johanie.

Bibby has an older sister who raised him. He recently bought a car for his mom who stopped using drugs when Lil turned 14.

Lil Bibby started his YouTube channel in 2012 but does not publish songs on that channel any longer.

He has a channel with Vevo followed by 37 thousand subscribers and gaining almost 10 million views. 1.5 million people follow him on Instagram.

Unlike other rappers Lil Bibby doesn’t like to use names in his songs or use a lot of Chicago specific slang because he is trying to make songs that a broader audience can relate to.

Bibby is a student. In the Fall of 2016 he enrolled at Illinois State University for computer engineering. He dropped out of high school just points away from graduation, but came back and got his degree.

Bibby is in fact of mixed-race: his mother is half white and his grandfather is white. He was raised by his mom.

Lil wears piercings on both ears.

Lil owns a house in Chicago in an unknown location but still likes to hang out in the hood where he grew up.

Brandon Dickinson got arrested more than 60 times so far, as he disclosed in a recent interview. The first time it happened he was just 14 years old. He once even got arrested twice in one day and also had to attend anger management classes.

At one point in his life Bibby got addicted to lean, a recreational drug popular with teens that is based on cough syrup. Lil is now clear of drug for several years. He also claims he does not drink or smoke because he wants to have control of his life.

One of his former managers stole money from him. Even before that Lil had major trust issues. He recently said he does not trust anybody in the world with his money. Not even his mom. He likes to know and double check anything. And that is one of the main reasons why he does not get high any more so he can stay on top of things all the time.

American rapper Lil Bibby is known for his mixtape “Free Crack” that had two homonymous follow-ups. The 23-year-old recording artist from Chicago with an unforgettably deep voice, earned a net worth of $500.000 in 2017 through a series of successful mixtapes and collaborated with big-name artists.

His best known work is a song Lil Bibby has co-written for a fellow rapper Juicy J – the hit track form 2014 called “Low” that climbed to number forty four on hip-hop charts.

Lil Bibby is dating American model Johanie Taylor since the beginning of 2016. He still lives in Chicago where he bought a house.