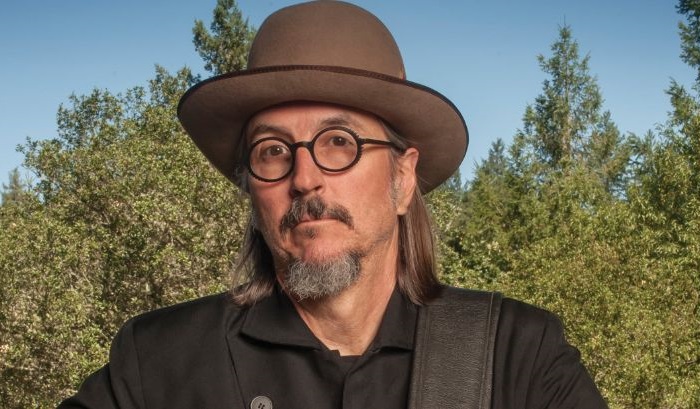 Les Claypool is a longtime American singer and a songwriter who plays numerous instruments and other than music is also working as a screenplay writer, movie director, producer, and author.

He is often called Colonel Claypool and is known for his work with several bands of alternative and funk metal, thrash metal and progressive rock.

He was born as Leslie Edward Claypool on September 29, 1963, in the town of Richmond, situated in the state of California, United States.

He grew up in the part of California called El Sobrante. His parents were very hardworking and he learned to be independent of a very early age. He had spent a lot of his time by himself and he experimented with music from an early age.

He was a teenager when he decided to pursue a career as a bass guitarist and he was focused on it for years.

He was influenced by many known bass players like Paul McCartney, Roger Waters, Bootsy Collins, and Larry Graham.

He is a good friend with Kirk Hammet, who later became a member of the world-known band Metallica.

Before entering the world of music more seriously Les had to work on many workplaces to support himself and one of them was a job of a carpenter.

In 1986 he auditioned to be a bassist in a world-famous group Metallica but didn’t make it in.

The frontman of Metallica told him that he was too good to become their bassist and suggested him to start his own career.

Les, however, believed that he wasn’t the type the group was searching for and that he was to “weird” for them.

Les also realized that he doesn’t want to be a part of that kind of band too so he wasn’t upset when he was turned down.

That is why Les formed his own music band called “Primus”, whose members were Claypool, Todd Huth, and Jay Lane.

They had a great collaboration which satisfied all of them, especially because they could use their creativity and songwriting skills for their own satisfaction.

Claypool was considered to be the leader of this band and made a strong funk influence on the group. That is why the band was often characterized as a funk metal band.

The band started seriously performing in 1989 and became interesting to the public. They appeared on a lot of festivals like Lollapalooza and appeared on various shows on TV. In 1995, they appeared on Woodstock ’94.

Lollapalooza is a very famous music festival which is held annually and is four days long.

It is very popular and it is held all over the world. The biggest and most prominent festival is held in Chicago, Illinois.

In 1989 they released their live album called “Suck on This” which released through Prawn Song Records and Interscope Records.

It was produced by Matt Winegar and Bob Cock and all the songs were written by Les himself. Primus composed all of those songs.

In 1990 and 1991 the band has released two albums titled “Frizzle Fry” and “Sailing the Seas of Cheese”.

Their EP called “Miscellaneous Debris” was released in 1992 on which Claypool played his Rainbow bass for the first time.

It was released by Interscope Records and completely produced by Primus.

Making plans for Nigel was a big hit from the album.

In 1993 they have released the 3rd studio album named “Park Soda” which had huge sales and was certified Platinum. It was released through Interscope Records.

In 1996 the Primus has released a song named “Wynona’s Big Brown Beaver” which was one of the singles on their album Tales from the Punchbowl which came out in 1995. This song earned a nomination for the 1996 Grammy Award in the category of Best Hard Rock Performance in 1996.

In 1997 they recorded the theme song for a popular animated series called South Park. Their song “Jerry Was a Race Car Driver” was used in a video game titled “Tony Hawk’s Pro Skater”.

A year before that Les has released his first solo album which he also self-produced. It was titled “Highball with the Devil”. On this album, he played drums and bass guitar but he also played guitar.

This album was completely done in his own studio in which he invested his money. The studio is named ” Rancho Relaxo”.

In 2000, Primus took a break from recording and performing together. Claypool decided to form a supergroup and invited Stewart Copeland from the world-famous group The Police and Trey Anastasio from Phish to join him.

They had planned to perform only once in a festival in New Orleans but they became so popular that they went on a tour. They named the group “Oysterhead” and became good friends and collaborators.

They disbanded in 2001 after releasing one album.

The album was named The Grand Pecking Order and was released through Asylum and Elektra Records.

In 2000 Les also formed a rock group named “Fearless Flying Frog Brigade” who performed at a lot of festivals and whose members were picked by Les himself.

The band has released two live albums. One of the albums was a cover of an album made by Pink Floyd.

In 2002, “Purple Onion” was released through Prawn Songs Records and it is the only studio album made by this band.

In 2002 he united a musician called Buckethead, Bernie Worrel and Bryan Mantia into a band called Colonel Claypool’s Bucket of Bernie Brains, also known as C2B3.

They released an album named “The Big Eyeball in the Sky” in 2004 and it was followed by a big US Tour.

All of their shows were opened by Gabby La La. Her album “Be Careful What You Wish Four” was produced by Claypool and he signed her to his label.

In 2006 Les made a mockumentary movie named “Electric Apricot: Quest For Festeroo” which appeared on festivals.

In 2006 he also published his first book named “South of the Pumphouse”, made as a novella.

In 2006 the greatest hits album called “They Can’t All Be Zingers” was releases by Primus. Primus went on a tour the same year and the tour was named “The Beat a Dead Horse Tour”.

In 2008 he gained the role of a preacher in James Isaac’s movie called Pig agent.

In 2010, Les went on a tour to Europe for the first time in his career, following a band Hot Head Show.

In 2010 Tim Alexander left the band and was substituted with Jay Lane. The band released their studio album Green Naugahyde in 2011.

In 2013 his ex Primus drummer named Tim Alexander and a guitarist LaLonde made an EP with him. They named it “Animals Should Not Try to Act Like People” and they went on on a tour after the release.

In 2013 Jay Lane left the band and Alexander returned to it The band released their new album, 8th in the row named “Primus & the Chocolate Factory”.

In 2013 Les performed a duo with his high school friend Bryan Kehoe and it was named “Due to de Twang”. They released an album “Four Foot Shack”.

He collaborated with Sean Lennon in 2016 at the Bonnaroo Music Festival in 2016.

His collab with John Lennon’s son Sean was very important to him and the rock band in which Sean performed named GOASTT – The Ghost of  Saber Tooth Tiger started touring with Primus.

This eventually led to Monolith of Phobos , the first album of this project named The Delirium and their new collaboration in the spring of 2019 on “South of Reality”.

In 2017 Primus released its 9th album called “The Desaturating Seven”.

The same year he released his own album named “Of Whales and Woe”, featuring Skenik and Gabby La La. It was produced by Les and distributed by Prawn Song.

Lee is also a composer and had made several compositions for Mushroom Men Wii Game.

Les Claypool is married to Chaney and they have a son Cage Oliver and a daughter Lena Tallulah.

He also calls his home in Occidental “Rancho Relaxo” and has a studio by this name.

He is known for his often use of marijuana and his electric personality.

He also loves to fly fish and was a guest of a tv series Fly Fishing the world.

He started making vine for his personal use in 2007 but it eventually has grown to Claypool Cellar, Cincinnati, a city in Ohio, has “Les Claypool Day”.

In 2013 his family suffered a tragedy that made a great impact on him.

He has a brother Ron with whom he is very good and his baby son Mathew died of Infant leukemia.

Several years ago Les Claypool auctioned his own guitar, which was very rare and precious and has sold it for over $50 k. He was very eager to help his brother to pay for Mathew’s treatment.

Les was very surprised by the fan’s reaction and the number of people who wanted to help him to raise the money for Baby Mathew.

Les also has nephews named Isaiah, Noah, and Lilly whom he loves very much.