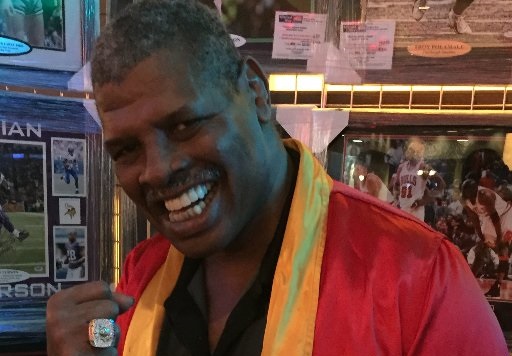 In the history of boxing, there is one name that stands out above all other names – this is the name of Muhammad Ali. But this is not the story about Ali, and this is a story about the man who was seen as an underdog, young and restless, about the boxer who came from the worst possible conditions and succeeded.

There are not too many boxers who succeeded in winning one and only Muhammad Ali, but this man did just that, his name is Leon Spinks.

This happened in February 1978 – and at the same event, he became the undisputed world heavyweight championship, along with the WBC, WBA and The Ring Heavyweight titles.

The fight between the two players was considered one of boxing history’s biggest defeats, but Ali did not wait for too long, he took the title back very soon.

But during this time, he had earned a lot of money but also lost it – his career was not so long, and he also had his fair share of private problems.

Leon had a difficult childhood – his father left the family and Leon was alone with his mother and seven siblings.

The family lived in terrible poverty, and his neighborhood was filled with crime.

This was St. Louis’s Pruitt-Igoe housing project – many describe it as a nightmare of violence, drugs, and gangs.

Leon’s mother had a hard time raising her kids in those conditions.

Things got even worse when Leon started fainting because he suffered from low blood pressure – he was weak in this way and was bullied by other boys.

Leon did not finish school, but after he dropped out, he joined the Marine Corps with the desire to get back his life in some kind of order.

This was not a good idea for Leon, who had a restless nature, and he could not face military style and discipline, and he often got into fights with his sergeants.

But, luckily, Leon succeeded in overcoming struggles that he had in the Marines, and he finally settled into the disciplined life – for young Leon this meant only one thing, joining the All-Marine boxing team.

Boxing accommodated the lean young man well, and he bloomed into a very competent amateur boxer who was much out of his league, and he was about to prove it to the world.

Leon had a good amateur career – he fought in three consecutive years, from 1974, till 1976 and all these three years he won AAU light heavyweight titleholder – this was the national title.

In 1974 he won in the fight with Michael Dokes.

In 1976 he competed as a light heavyweight at the 1976 Montreal Olympics. He has won over Abdel Fatihi, Anatoliy Klimanov Ottomar Sachse, Janusz Gortat,  Sixto Soria – Leon took the gold medal.

He beat all opponents, and one by one they fall, and this kid took prestigious gold.

Leon became professional in the year 1977 – his debut was in the middle of January of that year in Las Vegas, Nevada.

During this match, Leon knocked out Bob Smith after just five rounds.

After this remarkable victory, he defeated Peter Freeman in a knockout in an opening round in England.

In his next match, he challenged Pedro Agosto, and he won this match by knowing Pedro in the first round.

Next, he continued to defeating Alfio Righetti the Italian titleholder after representing a match with Scott LeDoux.

The pick of his career came in the year 1978 – in this year, Leon did the unthinkable – he dared the governing world heavyweight champion Muhammad Ali for the title.

Even in his mature years, and not in his best ever shape, Ali was still seen as an intimidating opponent for the younger Leon.

In February of that year, Leon made boxing history – he defeated Ali, and this was the triumph that came as a shock to the boxing community as Leon became the single man to take this great title from Ali.

Only a couple fighters had succeeded that feat before him, one of was famous Joe Frazier.

There are many more of those who lost from Ali.

This was the peak of Leon’s boxing career, and in 1978 he was a star on the spread of the issue of ‘renewed publication “Sports Illustrated.”

But, problems happened when Leon refused to hold his title upon famous fighter named Ken Norton – he did not want to do it, and he was aware that he could lose his title, but that did not stop him.

The title of the World Boxing Council was taken away from Leon due to his rejection though he still held his World Boxing Association crown.

On September 1978 Spinks met Ali for a rematch – he lost the title after 15 rounds.

After this event, his career began its downfall and the things kept getting worse and worse.

In 1979 Leon fought only once was beaten out in the opening round by anticipated WBA world heavyweight titleholder Gerrie Coetzee.

Two years later, in 1981, Leon dared Larry Holmes for the heavyweight title in what would be his last occasion at the title.

All of this loses and ghosts of the past that he still struggled took a toll on him, and his failing career seems to be going in the way that it could not be restored ever again.

His physical health endured considerably due to these weaknesses, and Spinks was not himself, he was not the man from before.

In 1988 Leon first retired, this was the year when he started working as a greeter at NFL trainer Mike Ditka’s eatery located in Chicago.

This was unthinkable at that time, and he struggled even more because of his bad choices.

Leon was forced to return to boxing in 1991 thanks to financial difficulties that were collected. Leon finally retired.

In the 90s, he managed for Frontier Martial-Arts Wrestling, and was really good at it – he won a trophy in 1992, making him the single man to possess titles in boxing and wrestling.

Next, in the 90s, he served as a headliner on year-round, travelling around the world and having autograph appearances.

In the year 2009, Leon was a piece of the documentary movie named “Facing Ali”. In this film, some distinguished past competitors of Ali talk about how Ali transformed their lives.

In the year 2017, Leon Spinks along with his brother, Michael, was introduced into the Nevada Boxing Hall of Fame.

Spinks has been married three times.

First, he was in a marriage to a woman named Nova Spinks, but this marriage was not working out, they broke up eventually.

His second marriage was with Betty, in the year 1988, but these two also spilt after a while.

While still being legally married to Betty, Leon met his third wife, – Brenda.

The two were first good friends who later ended in a passionate bond.

He separated from Betty and married for the third time to Brenda after a few years of dating in 2011.

Spinks is now married to Brenda, and the couple lives happily in Las Vegas since 2011. Leon told a journalist his life is “satisfactory” and that he does not like to appear in public.

A love of boxing runs in the family, since Leon’s son, named Cory Spinks – he is the acknowledged welterweight title and was the IBF junior middleweight victor two times.

But Leon had his share of tragedy – his other son named Leon Calvin was murdered in the 90s in East St. Louis. Leon Calvin was riding back from his girlfriend’s apartment when he was shot dead.

The unfortunate event here was that Calvin was an aspiring professional boxer with a record of 2-0.

Also, Leon’s grandson that also carries his name is a light heavyweight fighter.

Leon had some medical issues also since he noticed that he has a problem in speech, so the doctors told Leon that he has a decrease in his brain, as a consequence from many hits that he received through his boxing years.

Leon was hospitalized two times back in 2014 in a Las Vegas hospital for operation due to intestinal problems, but Leon fully recovered.

Leon is a retired boxer, and his Net Worth is about 400 thousand dollars – he has been fighting since 1977, and he won his heavyweight title when he beat the most famous boxer of all time –  Muhammad Ali.

But he was stripped from his title since he did not want to defend his title in the next match – but he agreed to fight Ali later on, and lose.

This was the breaking point for Leon – his professional boxing career had its ups and downs, gaining twenty-six bouts, and lost 17.

We must add that Leon, by some claims, has much less money on his bank account, somewhere around 20 thousand dollars.

Often times Leon was described by some reporters as resplendent and insensitive, unlike his brother Michael who was low-key (he is also a boxer, as we have mentioned before).

He was the unlike winner – the one that can party all night, come to the match and still win.