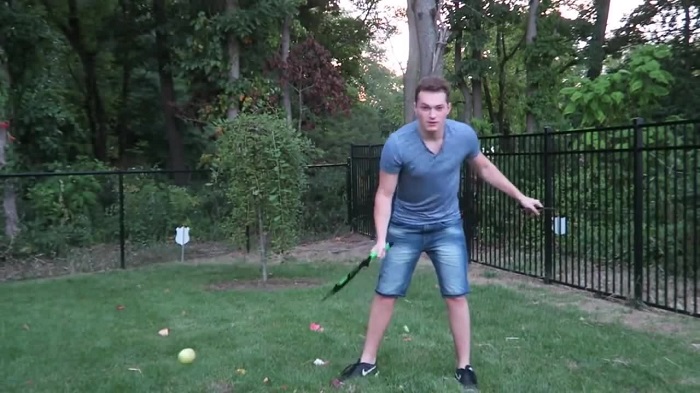 Lance Stewart is a well known American comedian and a social media star.

He has got an older sister named Sabrina Stewart and he claims they get along really well.

His family is of mixed Italian-Irish descent, so when he was smaller he had to learn a few extra languages. That didn’t turn out to be his call so today he speaks Italian not-so-good.

There aren’t many informations about his childhood but it is known that his family was always very supporting and that they were all very close to eachother, in the terms of bonding.

Lance went to Delsea Regional High School from 2010-2014, but realized that he wasn’t really into education.

His sister Sabrina is responsible for introducing her brother Lance to Vine and he says he is very thankful for it. Although Sabrina never made any vines, she watched them and found them funny so she decided to share them with Lance.

He started making short videos that gave him a lot of attenion and huge popularity on Vine, which was a huge social media back in 2014.

He made those videos as a hobby, but eventually he opened his own YouTube channel in 2014. This was one of the smartest things he did, as Lance states, since Vine got shut down and many viners never got the chance to re-open their social media accounts.

He soon gained a lot of followers and with his video called „It’s my money and I need it now“ he attracted almost a million revines.

His main platforms for staging videos were Vine and YouTube.

His video „My girlfriend shows her nipples on Camera“ is the most played video, getting to the number of 6 million views. However, now he makes various types of videos, including scary videos, vlogs, pranks and so on.

He is also a businessman: he included a clothes shop on his channel, where he sells hoodies, T-shirts, towells etc.

He was nominated in the category „comedian“ at Shorty Awards.

In 2015 he signed a contract with a Hollywood talent agency called „LITA“, which secured his future.

Today he lives in Los Angeles where he bought himself an apartment and in New Jersey too, when he feels like changing his environment a bit.

Since 2013 he is dating a girl called Lizzy, what is a nickname of Elizabeth Wurst, an Instagram star. She also started her career on Vine. They now live together and oftenly make videos together.

He often features his family in his videos, such as the video where he gives his father Bruce a Corvette as a birthday gift. He is a car enthusiast and so is his father and he thought a car would be a perfect gift to say thank you to him.

His mother Nina and his grandparents are also often in videos. His grandmother is one of his favorite people in the world, as he says.

Once he cut his little finger while doing a stunt with swords.

His favourite books are Harry Potter Series, although he loves movies more.

Lance also loves Italian food because his parents always taught them diversity while they were young.

Hunger games are his favourite movies. He also loves seeing Sponge Bob every now and then just to relax and remind himself he is still a kid.

He is known for his charity work. He once ordered 100 burgers to distribute to homeless people, sleeping on the streets.

He is a great adventurist so he travels a lot and visits places in search of new adventures. He most oftenly travels with his girlfriend.

His hobbies include listening to music, watching movies and he is very fond of swimming.

His money also comes from endsorments and ads.

His favourite actor is Adam Sandler, since he is also a great comedian. He loves funny movies because he has to take a break from all of the horror movies he always watches with his girlfriend.

His favourite drink is Raspberry Lemonade.

Lance done a video to support charity: one share of the video made $1 donation.

His grandmother is known as „Badass Grandmom“ and is often featured in Snapchat stories. He says that his best friend is his grandmother, and that making videos together brought his family closer.

In 2016 he bought a blue Audi R8 and he featured it in a lot of his videos. He is a true lover of fast cars although he doesn’t like to drive fast. He likes to take care of them.

He posts one video daily and it is the main reason why he is still popular – he has continuity. His fans are all about his common uploads because they are willing to leave comments on each and every video.

He says he has the best fans in the world since they always help him raise money for charity and get involved into projects.

Lance Stewart is an online entertainer whose estimated net worth is $2.5 million.