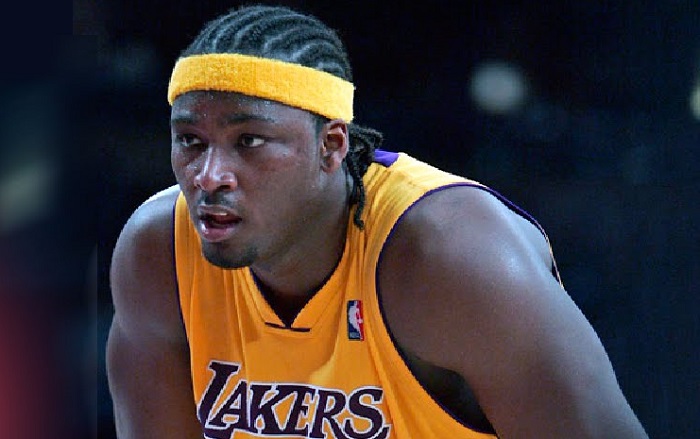 Kwame Brown is a retired basketball player who played professionally in the NBA for the longest period of his career.

The Washington Wizards choose him in the 2001 NBA draft as the first pick who was chosen straight from the high school that he attended.

Throughout his career, he has performed for multiple basketball clubs such as LA Lakers, the Wizards the Memphis Grizzlies,  Philadelphia 76ers, Charlotte Bobcats, Golden State Warriors, and of course Detroit Pistons.

He was often a target of criticism, and some experts say that he cannot play and that he is a waste of time.

But many times now, he had proved them wrong, and he spoke on several occasions how he came from some miserable place where he was abused and came from poverty, and he pulled himself from that situation and came to the fame and fortune.

He did not do it by stealing, but by playing basketball, and this is one of the reasons why he hates when people criticize him, cause he says that he is not lazy but the one that made it.

Still, he is facing some backlash, but he continues his path – despite all the troubles that he has.

Kwame Brown real name is Kwame Hasani Brown, and the date of his birth is March 10, 1982.

He was born in Charleston, South Carolina.

Kwane spoke on several occasions on his difficult childhood – he said that he feels like God is working in mysterious ways and that he learned it in a hard way.

Kwane was often in homeless shelters, and his father was an abusive man who harras his mother and his siblings, and he is the only one that succeeded in life.ho

Often times, they had to call the police to intervene.

The Brown family were often kicked out of their homes since his brothers were dealing with drugs –  and all of that time, Kwane had to go to school and train basketball.

He was evaluated continuously as the most exceptional basketball performer in his High school and was among interesting friends at that time.

He was dubbed the best basketball athlete in High School.

At the legendary Glynn Academy, Brown completed his high school class occupation as the best rebounder in the entire school.

Brown initially planned to perform for the Florida University but was later (in 2001) revealed for NBA draft.

At that moment, one and only Michael Jordan was the team leader of The Washington Wizards -he was picked not Brown.

Presumably, due to big expectations, Kwan’s first season was low in results on the court.

Nevertheless, the Wizards management had belief in Brown’s abilities and his next season as an expert, and he was given more time on the basketball court.

He succeeded in doubled his total minutes and raised his numbers very much.

Brown proceeded to develop his play, especially in his third term, posting records in both rebounds and points as well.

During a game he performed against the dominant team of Sacramento Kings, he showed great potential, in which he secured 19 rebounds and 30 points.

He spent three years with the Washington Wizards, after which he received a deal that was worth 30 million dollars, but he declined, preferring to test the open market alternatively.

In the next season, thanks to injuries, Brown was restricted to 42 matches.

Relating to his records for the prior year, of 30 points, he scored only 19 in the third period.

This season was also identified with constant disputes with his then trainer Eddie Jordan and other teammates.

In 2005, Brown was sold to the Lakers, along with his teammate Laron Profit.

They were given for Chucky Atkins and Caron Butler.

This business made a lot of controversy from fans who hated Brown’s rank, and he was named as the basketball athlete who cannot do too much.

At the start of the season, he only had just six points and six rebounds.

In December of 2005, he played his opening match as a Laker.

The game was held at the Capitol One Arena.

The game was totally sold-out, and supporters yelled at him the whole time of the game, primarily when he dropped the ball that was thrown at him, which made the Lakers fall to the Wizards.

In 2006, Lakers centre Chris Mihm ended a season with an anklebone injury, and Brown caught his position, which was the original centre.

Throughout his duty as a centre, he raised his standards in total and started every game for the Lakers.

Brown became a central character of the Lakers set upon the team of Phoenix Suns.

Despite the fact they ended up wasting the entire series, it clearly showed that his potential was starting to rise.

That made Kwame Brown the opening centre in the whole season.

Due to his damage and injuries at the beginning of the season, so the starting spot was given to his inexperienced teammate Andrew Bynum.

Notwithstanding being on the bench, he was given back the starting spot in December of 2006. Being in a starter position, Kwane was not eliminated with the Laker followers, with was the result of an evident loss of focus, cut when he lost an obvious dunk.

Even though his teammate Kobe Bryant stood by him after that game and destroyed Lakers fans who yelled at him, it seemed that the possibilities that Brown would realize his potential was beginning to decline and with them the Lakers’ possibilities of reaching the playoffs in that season.

In 2008, along with two other members, Brown was sold again, this time to Memphis Grizzlies, but in July of that same year, the  Grizzlies decided not to engage Brown to a new deal, making him an free agent.

This came as a fantastic opportunity for Brown as it seemed at that time.

In July of 2008, it was announced that the Pistons contracted Brown to a two-year commitment that was meriting 8 million dollars.

In 2010, he signed an agreement that would last for a year with the Bobcats, becoming a part of the Warriors the subsequent year, signing a 7 million dollars value agreement.

For the next year, he moved to Milwaukee to perform for Milwaukee Bucks but didn’t appear in a single match.

He later contracted a deal for two years with the Philadephia 76ers, for nearly 6 million dollars.

Unfortunately, he sustained a muscle strain, so his club had to let him go.

After he didn’t find any interest, he isolated himself from the game for the next three year.

He tried a revival and joined the player company named Interperfomances to do so.

In April of 2017, Brown was chosen to participate in the inaugural selection of the BIG3 basketball league.

In that league, he operated for the 3 Headed Monsters, who presented it to the finals and finished up losing to Trilogy.

He was arrested for a few hours and then freed.

Brown had legal trouble – he was sued by the mother of his three kids, Jocelyn Vaughn and she demanded that Brown pay child support.

She sued him to prove paternity and ask child support for their 4-year-old, 11-year-old and 16-year-old daughters.

Jocelyn said that he had not helped her with kids financially.

She commands that he is submitted to a DNA test to confirm him as the legal father of their three children.

It is a known fact that Brown earned $64 million during his productive career, and when he paid all necessary taxes and fees, he was left with $35 million to $40 million.

Brown had lost a certain amount of money as it was seen in a lawsuit – he declares that his business advisors at Merrill Lynch stole $17.4 million of his finances.

When he spoke about his troubled childhood, he also said that the place from where he comes is the place where there is a lot of drugs and rapes.

He was one, as he said it, miserable kid, while growing up – and the fact that he succeeded is impressive.

He was one of eight kids, and four of his brothers went to prison.

He said that he succeeded and not only that he was a No. 1 draft pick.