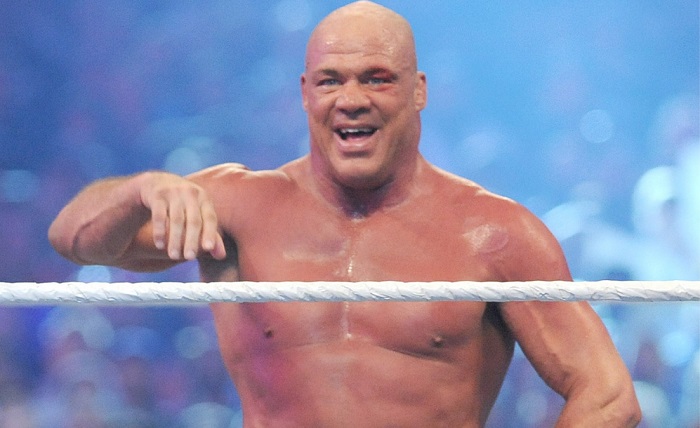 Popular wrestlers are considered some of the biggest celebrities in the USA.

In today’s text we are going to be talking about the legend of this branch of sport, Kurt Angle. We will touch on the subject of his net worth, career and personal life, so keep on reading to find out more.

He attends Mt. Lebanon High School, where he plays as a linebacker on the football team.

Angle’s career in the world of wrestling begins in the Greco-Roman wrestling clubs (considered amateur wrestling in the United States) of his city, Pittsburgh: at the age of nineteen the young Kurt wins his first junior title and in the following years becomes two-time NCAA university champion.

It was in this period that the selectors of Team U.S.A. for the 1996 Atlanta Olympics: the confidence of the technical staff is repaid by Angle with the Olympic laurel, which he won on July 31, 1996 in the 100 Kg category, after an exciting final against Iranian Abbas Jadidi, who won concludes at the overtime by the judge’s decision (at the end of the regular time, the two athletes were tied, 1 to 1).

In the following months, it seems that Vince McMahon himself is trying to put the Olympic champion under contract, but Kurt refuses not considering positively his possible future in pro wrestling; decision that two years later re-evaluates, signing an agreement with the World Wrestling Federation at the end of the summer of 1998.

Kurt’s debut in a wrestling ring takes place on August 20, 1998, when during a training camp organized by the WWF, he is defeated by Tom Prichard.

In October 1998, he took part in a Battle Royal which took place at the NWA 50th Anniversary Show, and which saw the victory of Steve Williams.

After a period of intense training aimed at changing his style of struggle to adapt to the way of professional wrestling, Kurt is sent to the Memphis Power Pro Wrestling in Tennessee (WWF satellite federation).

In the meantime, he also debates the dark matches on WWF shows, and also takes part in some Stamford Federation House Shows.

On May 10th, during a House Show, he was defeated by the late Owen Hart (1965-1999), in a show that took place in Orlando, only two weeks later Hart lost his life. July 24, 1999, defeating J.R. Smooth (better known as Rikishi) Kurt Angle conquers the MPPW Heavyweight Title.

Angle’s reign lasts only two weeks, on August 7th he is defeated by “Sensational” Steven Bradley.

On November 14, 1999, Angle made his “official” debut at the WWF, during the PayPerView Survivor Series. Angle is presented as “the only true WWF athlete”, he immediately receives a forest of whistles that are not mitigated despite his victory over another exceptional rookie, Shawn Stasiak, son of Stan, former world champion of the 70s.

Right now the successful gimmick of Kurt Angle is born: the arrogant and moralist Olympic hero, who wants to be respected and taken as a model for his qualities (Intensity, Integrity and Intelligence), without forgetting the catchphrase of his recurring phrase ” It’s true! It’s true! ”

His unbeaten endurance endures until the dispute of the Royal Rumble 2000, when he has to face the fearsome Tazz, ex ECW world champion recently arrived at Stamford’s company: Angle suffers the shame of defeat by submission to Tazmission, the deadly grip due to failure of Tazz.

In the edition of SmackDown! of 10 February 2000 the Olympic hero wins his first title, that of European Champion, snatching him from Val Venis after a meeting he largely dominated. The subsequent PPV, No Way Out, also awarded him the most prestigious Intercontinental Title to the detriment of the reigning champion ‘Y2J’ Chris Jericho: the match is very tight and, when the Anglocanese is getting the better, Angle hits him with his belt, getting the winning pin; the ending is agitated: the referee Earl Hebner enters the square and shows the referee of the match, Tim White, the images of the forbidden blow and so he believes he gets a reverse decision, but White remains on his position and validates the victory obtained in the ring from the Olympic Gold Medallist.

At WrestleMania XVI (2 April 2000) Kurt shows up to defend two belts in a double Triple Threat Match against Chris Jericho and Chris ‘the Crippler’ Benoit: ironically he wants to lose both titles without even being pinned, since Benoit wins the meeting valid for the Intercontinental Title against Jericho and that the same Y2J beats the French-Canadian one by winning the European Title.

During this time, the career of the American Hero experienced a moment of stagnation, alternating some brilliant victories, such as the claim against Chis Benoit to the ppv (UK only) Insurrextion, to other anonymous performances, such as the defeat suffered together with his friends, the Canadian ‘brothers’ and many times Tag Team Edge and Christian champions, against Too Cool (Scotty ‘2 Hotty’ Taylor and Brian ‘Grandmaster Sexay’ Christopher) and Rikishi at Judgment Day, others still decisive and bleak, like the defeat in just 2 minutes suffered by Big Show (which for the occasion fought rigged as Hulk Hogan) during Backlash.

The rescue of the champion arrives at King of the Ring 2000 (25 June 2000): in the knockout tournament which gives its name to the event, Kurt defeats first Jericho and Crush Holly via Olympic Slam (his trademark move) and then beats Rikishi also taking advantage of the injury that the Samoan wrestler had gotten his arm during the previous matches. Angle thus becomes the eighth King of the Ring, succeeding in the roll of honor to the likes of Bret ‘the Hitman’ Hart, Owen Hart, ‘Stone Cold’ Steve Austin and Triple H.

The Olympic hero then begins a feud against Undertaker, caused by the fact that Angle to help Edge and Christian, prevents American Bad Ass and brother Kane from becoming Pair Champions: the pinnacle of this feud is reached when Angle pours acid on the “gravedigger’s” Harley Davidson, while ‘Taker smashes the Vespa, with which he had arrived (to mimic the entry to the’ biker ‘).

The expected meeting between the two takes place at Fully Loaded and, although Angle tries to injure him in the leg, Undertaker dominates the match and makes him the subject of his new final move, the Last Ride (last race) PowerBomb.

Shortly thereafter, Angle becomes part of the federation’s most important storyline: as a ‘friend’ of Stephanie McMahon, Vince’s daughter, it arouses the wrath of ‘husband’ Triple H; at SummerSlam the two have the opportunity to face off together at The Rock for the World Title in a Triple Threat Match: ‘The Game’ even injures Angle in an attempt to perform a Pedegree on him on the table of commentators.

Kurt is transported away by the ring nurses, but towards the end of the meeting he reappears to disrupt HHH and in doing so allows Rocky to confirm himself as the absolute champion. The decisive match between the two challengers is scheduled for Unforgiven and has as special referee nothing less than the WWF Commissioner – as well as a living icon of Hardcore – Mick Foley (aka Cactus Jack, Dude Love, Mankind): to be decisive for the victory of the husband, however, is Stephanie, who hits an astonished Kurt Angle, allowing Triple H to complete the winning Pedegree.

No Mercy represents for Kurt the opportunity of his career: One on One is the Champion The Rock in a No DQ (match without disqualification): the meeting takes place on a plan of substantial equality, but in the long run it is the greatest Rocky experience to come out. Unexpectedly, Rikishi enters the scene (battered by the previous fight with Steve Austin) who, trying to favor Rock, ends up hitting him with a deadly Samoan Reverse Kick; Angle takes the opportunity that comes before him and puts KO Rikishi and The Rock with his Olympic Slam, getting the count of three that crowns him WWF World Champ (to the delight of Stephanie, his new manager).

At the 2000 Survivor Series, the Olympian is again in front of Undertaker: the match is one-way, with the American Bad Ass that hurts Angle, who tries to defend himself and hit him in the legs. At one point Kurt, close to surrender, disappears under the ring, only to be picked up by the gravedigger, dragged to the center of the square and thrown violently to the carpet by the Last Ride.

At the tally of two, however, Earl Hebner freezes and as he tries to point out ‘Taker that the athlete is not in Angle, he enters the ring, takes his opponent by surprise and keeps his World Title.

Only later it turns out that Kurt’s mysterious ‘double’ is none other than his older brother Eric, who was also contracted by the WWF. In Armageddon there is a Six-Way Hell-in-the-Cell Match that sees the current Champion, HHH, Stone Cold, Rikishi, Undertaker and The Rock: a very violent meeting in which all the participants end up hurting each other.

In the end, after the various Rock Bottoms, Pedegree and Stunner, it is a distorted Angle that lifts Rocky lifeless to the mat, maintaining the Title and ending the year as a champion.

The fantastic first year of activity of Kurt Angle ends with the conquest of 3 titles, among which the prestigious Intercontinental and the defense of the World Title, as well as the charge of King of the Ring 2000, so that the famous international magazine ‘Pro Wrestling Illustrated ‘, in drawing up the ranking of the 500 wrestlers of 2000, places him in 13th place overall.

The new year brings well to Angle, who defeats Triple H at the Royal Rumble holding the title.

His luck, however, ends in No Way Out, in fact he is beaten by The Rock, who tearing off his belt prevents him from arriving at Wrestlemania as a champion.

And it is precisely at Wrestlemania XVII that Angle begins a long feud with Chris Benoit that continues for as many as four ppv: Wrestlemania (Angle’s victory by submission); Backlash (Benoit won in a 30 Minutes Submission Only Match); Insurrextion (Benoit’s victory in a Two Out of Three Falls Match); Judgment Day (Angle’s victory in another Two Out of Three Falls Match). Benoit’s parenthesis closed, Angle found Shane McMahon a new and formidable opponent. The scenario of the clash is the PPV King of The Ring: Vinnie Mac’s son gives the Olympic hero a hard time coming very close to success. But it is Angle who brings victory home instead.

Shortly after the WWE is invaded by the Alliance Team (WCW and ECW purchased respectively by Shane and Stephanie McMahon) and Angle initially takes sides with the company of Vince McMahon, to then betray the federation of Stamford in favor of the Alliance about a few months later . Meanwhile, it must be said that Angle also manages to regain the title of absolute champion by beating Stone Cold Steve. Austin to Unforgiven (September 23, 2001).

Angle’s glory lasts only a few weeks: on 8 October, Austin regains his belt. Another title that Angle makes its own is the WCW US belt, which holds little: Edge takes it away from the threshold of the ppv Survivor Series. The Olympic hero betrays, without any reason, his own federation, that federation that officially launched him into the world of wrestling, giving him fame and success in a short time.

Kurt’s wife is called Karen Smedley. The couple married in 1998, but the couple announced their split in 2008 after ten years of marriage. The couple has two children together, a son and a daughter.

Kurt’s net worth is estimated at 25$ million, which is an amazing amount that comes both from his wrestling career performances, but also from his sponsorships and various deals with companies.

He is definitely planning on retiring from wrestling, so we won’t be seeing this net worth going much up, unless he decides to venture into some new kind of business.