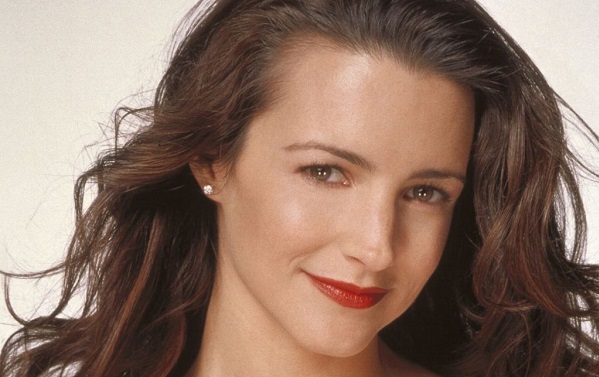 Kristin Davis is an actress from the United States that became known to the public with her role of Brooke Armstrong in Melrose Place, which started airing in 1995.

She is also famous for her role in Seks and the City that went on air in 1998. In this world-famous series, she plays the role of Charlotte York Goldenblatt.

For this role, she received numerous awards, and also Emmy and Golden Globe nominations. She said that without it she could not be the famous person she is today.

She is also known as a big philanthropist which resembles her Charlotte character from the series.

She was also in The Best Man on Broadway back in 2012 and had a role in Fatal Attraction in 2014.

Kristin was born on February 23th in 1965 in Boulder located in the state of Colorado,  in the United States. Her full name is Kristin Landen Davis.

When she was a little baby her parents divorced and put her for adoption. She was adopted by Keith Davis, a professor at the University of Colorado, Boulder. She has three stepsisters from her father’s first marriage and they got along very well.

When she was a child she moved to Columbia in South Carolina with her parents because her father got a job as a psychology professor at the University of South Carolina.

When she was only nine years old she helped to produce Snow White and the Seven Dwarfs in the Workshop Theatre. This inspired her to be involved in the film industry.

In 1983 Kristin graduated from A.C. Flora High School and after that moved to New Jersey so she could go to her college of choice. She always wanted to pursue an academic life, but she didn’t feel like that was the right thing to do when she started getting too many offers by the media later.

That college was Rutgers University and in 1987 she graduated with a Bachelor’s degree in Acting from Mason Gross School of the Arts.

After she graduated she opened a yoga studio in New York with her friend. It is something she is passionate about and something that helps her relax and have a lot of fun as well.

In 1991 she appeared on a few episodes of a soap opera called General Hospital which was very popular at that time and is one of the longest-running series on TV.

In 1995 she got the part of Brooke Armstrong Campbell in a drama called Melrose Place. Her character is an intern at D&D Advertising company. It was killed in the fourth season.

She also had smaller roles in Friends, Seinfeld and Will and Grace but none of them got a lot of attention. They were mostly based on her charming personality and beauty, but it just wasn’t what all of these people were looking for.

In 1998 she was cast in an HBO comedy-drama titled „Sex and the City” where she played Charlotte York. Charlotte is a perfectionist who was a straight-A student at her university and has majored in art history and also finances.

She is a complete opposite of Samantha, she believes in true love and is an optimistic person.

She played this character until 2004 when the show ended. This was something that changed her way of acting and perceiving Hollywood as well since she could finally have the life she dreamt of.

In 1999 she got the Women in Film Lucy Award for her work on television. This was a huge moment for her since it was a clear validation of everything she ever wanted to be.

In 2003 she was a host of „200 Greatest Pop Culture Icons“ on VH1. She said that this was very fun, especially since she loves music and spends a lot of her time listening to it.

In 1987 she made her debut in her first movie ever called „Doom Asylum“ in which she had the role of Jane.

In 1995 she was in Nine Months, a romantic comedy with Hugh Grant. She said that he is very charming and that working with him was one of the most interesting experiences she faced in her life.

The same year she was in Alien Nation: Body and Soul where she was Karina Tivoli. She said that she loves to talk to other actors and actresses because they help her understand the importance of growth and changes in acting.

In 2005 she was in Soccer moms, along with Gina Torres. The two stayed friends for a while after as well.

She was one of the judges on Project Runway on Lifetime TV network. It was a new experience for her, but she did her best and followed her dreams.

In 2005 she was in an adventure film The Adventures of Sharkboy and Lavagirl in 3-D. She has the role of Max’s mother.

A year later she was in The Shaggy Dog, a comedy film, where she was Rebecca Douglas. She loved to be a part of comedies because she says that these are the most fun when they are being shot.

The same year she was in another comedy film, Deck the Halls, where she acted alongside Danny DeVito and Matthew Broderick.

She was in a Christmas movie Three Days in 2005 for the ABC Family channel.

In 2008 she was in a Sex and the City movie that was produced by Michael Patrick King. She reprised her role from the series in it. The movie was a huge success and earned over $400 million in the box office.

She again reprised this role two years later, in 2010 for the movie Sex and the City 2. She was so happy to hear that she and her girls will get a reconnection moment they have been waiting for.

In 2009 she was in a comedy called Couples Retreat directed by Peter Billingsley. There she played Lucy Tanzin, who with her husband Joey (played by Jon Favreau) goes to a retreat to better their relationship. Ths movie was a huge box office hit.

In 2010 she was in Journey 2: The Mysterious Island where she played Liz, Sean’s mother (Sean is played by Josh Hutcherson). This one also did well at the box office.

After that, she was in Of Two Minds, from 2012, where she played Billie Clark. She was also in Z Nation in 2016 and in A Heavenly Christmas the same year. These projects were a lot of fun for her, especially because of the coworkers.

In 2015 she produced a documentary titled Gardeners of Eden, which brings light to the problems regarding illegal ivory trade.

In 2019 she also produced Netflix’s Holiday in the Wild where she also starred with Rob Lowe.

In 2012 she made her first-ever appearance on Broadway with The Best Man, written by Gore Vidal. She had to replace Kerry Butler because she couldn’t perform.

She was also in Fatal Attraction in 2014. It was played at the Theatre Royal.

In 2008 she had an arrangement with Belk, a store chain for her lady’s line that included accessories and clothes inspired by her hometown in South Carolina. Unfortunately, that didn’t work out because of the difficulties Belk found itself in.

Since 2004 Kristin is an ambassador for Oxfam, a non-profit organization that focuses on poverty. With them, she traveled to places like South Africa, Haiti, and Mozambique.

In 2011 she was interviewed for BBC and she described the horrible situation she witnesses at a refugee camp in Kenya and how badly the drought-affected them.

In 2004 she became a spokesperson for Maybelline. This was a huge move for her since she hasn’t been active in marketing, but she said that she chooses her partners very carefully.

She is a huge fan of elephants, and in 2009 when she visited Africa she found an abandoned baby elephant and saved it by calling the wildlife center.

In 2010 she got the Humane Society’s Wyler award because of all the attention she brought to this issue.

She helps elephants and the wildlife of Africa by being a patron of the David Sheldrick Wildlife Trust.

Kristin also worked with the United Nations High Commissioner for Refugees. She filmed a movie to raise funds for them and also went to Australia back in 2016 to promote them.

In 2015 she went to Uganda ad Congo. She wants to help all of the victims of sexual violence in Congo, and that was one of the reasons she visited.

We don’t know a lot about her personal life. She says that she always tried to keep a healthy distance between herself and the media.

She isn’t married. She is not ready to get married until she is absolutely true that her partner is the right one. Many say she is cautious.

From 1981 to 1982 she dated Scott Carter, a writer, and a producer. The relationship was not long and the two of them grew apart very quickly.

In 2009 she started dating Russel James, a photographer but that didn’t work out.

She was in a relationship with Aaron Sorkin until 2015. He is a screenwriter, director, and producer.

She was also with Mike Pulliam and Liev Schreiber, along with Jeff Goldblum.

In 2011 Kristin adopted a daughter that she named Gemma Rose Davis.

In 2018, she adopted a son, Wilson. She said that this completely changed her life, adopting kids and giving them a home. The new role of being a mother was demanding, but she said she loved it.

They currently live all together in Los Angeles, in California. They don’t share too much about their daily living since the paparazzi would absolutely overwhelm them.

She had problems with alcohol in her early years because she often drank to help her with her social anxiety because of her as a shy kid.

She stopped drinking when she was 22 and says that she does miss it, but its the price she’s got to pay for her to be happy and healthy.

She also said that the pressure of Hollywood and the media forced her into this habit.