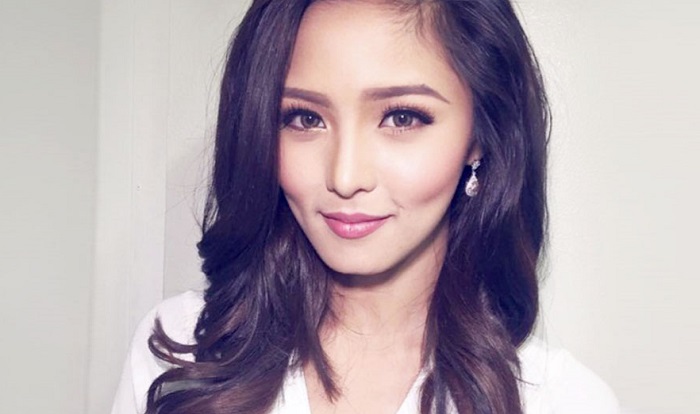 Kim Chiu is a Filipino actress, television host and a singer with Chinese ancestry.

She became known when she was very young because she was on television and acted a lot.

To the Philippines, she is known as „Chinita Princess“ and was „Princess of Philippine Movies and TV“ for three years in the past.

Right now Kim is under Star Magic that is owned by ABS-CBN.

Kim started her career in showbiz when she was 14 after she won Pinoy Big Brother, the first teen reality TV that was airing on ABS-CBN.

After that, she was in „Sana Maulit Muli, a 2007 series. For this series, she won the „Most Popular loveteam“ and „Most Promising Female Star“.

She was in a lot of movies that had awesome box office numbers, like „Bride for Rent“ from 2014 which is one of the highest-grossing films from the Philippines ever. Some other movies that were popular were „The Ghost Bride“ in 2017, „I Love You, Goodbye“ from 2009 and „Bakit Hindi Ka Crush Ng Crush Mo?“ from 2013.

Kim won many awards and some of them are PMPC Award in the category „Best Drama Actress“ for „Ikaw Lamang“, FAMAS Award (she was nominated four times but won only once).

She was also called „Princess of Philippine Movies and TV“ by the GMMSF Box-Office Entertainment Awards for three years because of all of the roles she had in movies but also on TV.

She has a huge and devoted fanbase because of her acting skills and her involvement with her fans.

She is a fan of sports and is an ambassador for many companies in the Philippines.

She was born on April 19th in 1990 by the full name  Kimberly Sue Yap Chiu. She is the fourth child of Louella and William Chiu.

Her father was a businessman and her mother migrated from Dinagat Islands to the Philippines. She knows how to speak Tagalog, Cebuano, English and knows the basics of Mandarin, Waray, and Hokkien.

Her parents separated in 1998 and she hasn’t had a stable relationship with her parents since. She was raised by her grandmother and they moved a lot so she lived in cities like Cebu, Tacloban, Mindoro, Cebu City, etc.

In 2013 she reconciled with her after in San Jose. Soon after that Louella fell into a coma and died.

Kim came to prominence after winning „Pinoy Big Brother: Teen Edition“, a reality series that was popular in the Philippines. For it, she moved from Cebu City to Manila so she could record it. Kim and other competitors entered the house for the first time in April of 2006.

She was there for 42 days and won in the finale with over 600 thousand votes which were more than 40% of the total votes. She got the title of „the Teen Big Winner“ at the Aliw Theatre located in Pasay City. What was special about her in this reality show was that she was so loved that she was never voted off for eviction.

After she won this she signed to Star Magic. Gerald Anderson and her became regular actors who appeared as on-screen partners in shows like „Alog-Alog“ and „Love Spell“. They were also in the movie „First Day High“.

Kim had a role in a primetime TV show called „Sana Maulit Muli“ again with Anderson which came out in 2007 and got good critics.

In 2007 he won the 38th Guillermo Mendoza Box Office Award in the category of „Most Promising Female Star“ and also a PMPC Star Award in a category „Best New Female TV Personality“ for „Sana Maulit Muli“. This was later released under another name, „Chances“.

After this she decided to release her first album titled „Gwa Ai Di“ and it was released by Star Records. This album got a Gold Records status and the most famous song from it is called „Crazy Love“.

The next movie she appeared in was titled „I’ve Fallen For You“ and it was released by Star Cinema.

In 2008 she got a role in a Filipino version of a series titled „My Girl“ which originates from South Korea.

A year later she made an appearance on another television series, called „Tayong Dalawa“. She played Audrey, a girl who makes two military men fall in love with her.

In 2009 she got an entry for the Metro Manila Film Festival for her film called „I Love You, Goodbye“ she made under Star Cinema.

In this movie, Kim played a villain for the first time in her career and received several award nominations for this movie from awards like Gawad PASADO Award, PMPC and MMFF Award in the category of „Best Supporting Actress“. This movie did extremely well in the box office.

She was in a romance movie titled „Paano Na Kaya“ in 2010 which was released outside the Philippines, too. She was in the highest-rated TV series of that year in the Philippines called „Kung Tayo’y Magkakalayo“.

In 2010 she and Geral Anderson made a movie for the last time. This one was called „Till My Heartaches End“. In the middle of promotions for the movie, it was revealed that the couple (Gerald and her) have split after a long relationship. The reasoning behind their breakup was not revealed.

She hosted the 12th season of a series usually called „Your Song“ but this time „You Song Presents Kim“. There she paired up with Sam Milby, Vice Ganda, Jake Cuenca, Enrique Gil, Pokwang and Derek Ramsay.

In the year 2011, she was in a comedy TV series titled „My Binondo Girl“ and she did so alongside Jolo Revilla, Xian Lim, and Matteo Guidicelli.

A year later she was in „The Healing“, a horror movie. She got an award for best supporting actress for this role from almost every award ceremony (the two that haven’t given her an award for this are „The Young Critics’ Circle“ and also „the Gawad Urian.

She was in the movie „Bakit Hindi Ka Crush Ng Crush Mo?“ that is originally a book written by Ramon Bautista and in it, she starred again with Xian Lim. This movie was released in 2013. It good positive feedback.

At the beginning of 2014, she was in the movie „Bride for Rent“ which is a romantic comedy. There she plays Rocky, a girl who agrees to marry for money because of her financial issues.

This film earned a lot and was a success. With it, Kim became one of the biggest celebrities in the Philippines at that time. This movie is the 6th highest-grossing Filipino movie and in the second place when we look at romantic comedies only.

After that, she returned to TV and started starring in „Ikaw Lamang“.

This series featured a lot of known actors like KC Concepcion, Coco Martin, Jake Cuenca, and Julia Montes. It got a PMPC Star Award in the category of „Best Primetime Drama Series“.

After this, she made a romantic comedy titled „Past Tense“.

In 2015 she was in „Etiquette for Mistresses“ alongside Kris Aquino, Iza Calzado, and Claudine Barretto.

For this movie, she was involved in the making of the soundtrack and she recorded singles for it like „Labyu Langga“ and „Duyog“.

After that, she did another romantic movie „All You Need Is Pag-Ibig“.

In 2016 she was in a drama titled „The Story of Us“ and played Tin Manalo in it.

In 2017 they aired another season of „Ikaw Lang and libigin“ on ABS-CBN and it was consistently better ranked than the rest of the program.

In 2017 she was in another horror movie „The Ghost Bride“ where she had a character called Mayen Lim and it’s about a girl who has to decide to live normally or to be wealthy and live with loved ones after accepting the Ghost Wedding. She did this alongside Alice Dixson, Cacai Bautista, Matteo Guidicelli and many more.

In 2018 she did another horror movie but this time it had elements of a comedy in it. It was called „Da One That Ghost Away“ and it was directed by Tony Y. Reyes.

The same year her film „One Great Love“ became an entry for the Metro Manila Film Festival that year.

In 2006 she started dating Gerald Anderson and they dated until 2010.

She often promotes some causes and is involved in charities. She was a part of „Win Against Asthma“ because she battled with it while she was a child.

She promoted actions of „Philippine National Red Cross“, PETA. She and her boyfriend Xian Lim were often helping after natural catastrophes like Typhoons.