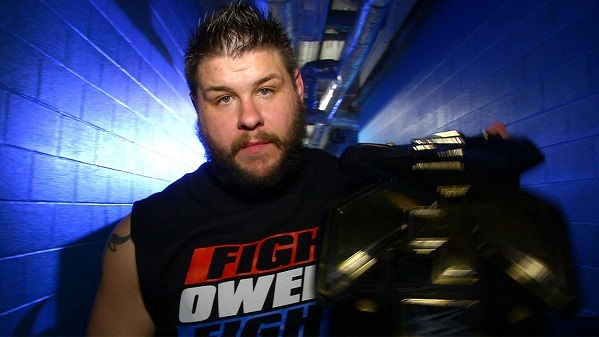 Kevin Owens is the ring name of a very successful and popular Canadian pro wrestler who is wrestling under „Raw“, an American professional wrestling band.

He had been wrestling since 2000 and in that period he gained many awards and won several championships. He holds multiple titles, from Pro Wrestling Guerrilla championships, WWE Universal and Continental Championship to receiving Ring of Honor.

He was born as Kevin Steen on May 7th, 1984 in a city called Saint–Jean–Sur–Richelieu, located on the eastern side of Quebec province in Canada.

He grew up alongside his brother Edward and comes from a family with French roots.

His first language is French because it is the language spoken in his city.

He taught himself English through television, mostly by watching his favorites WWE Monday Night Raw events while being a teenager.

He was involved in sports from his early life. He used to play soccer, baseball, and ice hockey but he always had a dream of becoming a professional wrestler.

His father was a huge fan of wrestling so the two of them often watched wrestling on TV, especially Wrestle Mania.

His mother and father eventually let him start training wrestling because it was everything he talked about.

He began training with a Quebec wrestler named Serge Jodoin. One year later he changed trainers and turned to Jacques Rougeau who wrestled for WWFederation. His most favorite trainer was Terry Taylor.

He had his debut match on his 16th birthday and continued wrestling for Jacques Rougeau’s promotion until he was twenty years old.

His first big match was in 2003 when he debuted at the International Wrestling Syndicate as a part of the „Born to Bleed“ event.

One of his biggest opponents was El Generico, who defeated him several times before 2004 when he won the IWS Heavyweight Championship after defeating Roderick Strong in October the same year.

In 2007, at the event titled „Blood, Sweat & Beers“, Steen won a match against Jay Briscoe, a wrestler for New Japan Pro-Wrestling promotion company.

In 2008, he met his big opponent El Generico twice, both of them winning one match. He kept his IWS World Heavyweight Championship title by defeating Joey Mercury in autumn 2008.

He was also involved in Combat Zone Wrestling where he appeared for the first time in 2004. He eventually teamed up with El Generico.

In 2005 he won his first title in Combat Zone Wrestling and continued his good work by winning the Iron Man Championship.

He lost the title to LuFisto, holding it almost for 1 year. He left the Combat Zone and returned to it once in 2014.

His wrestling for Pro Wrestling Guerrilla started in 2005 and he soon won it after winning a match against A. J. Styles. He lost the title several months later by Joey Ryan.

He teamed up with El Generico in 2006, working their way to winning the PWG Team Championship which they did in July 2007 after defeating Rodrick Strong and PAC. They lost their belt in October.

They regained their title in the spring of 2008, but he left PWG after he was invited to ROH, Ring of Honor.

He teamed up with El Generico again and won the title of ROH World Tag Team in September 2008. They lost their titles in spring 2009 to Eddie Edwards and Davey Richards.

He was disqualified at the Big Bang! Event when he struck his ex-partner El Generico with a chair.

He later defeated El Generico at Death Before Dishonor event but suffered a loss in a Double Chain match when Steen pulled of El Generico’s mask from his face.

Their feud ended in a Fight Without Honor Match where El Generico won any by this move he put Steen Out of Ring of Honor. His contract with Rott expired in 2011 and was prolonged for one year.

His first fight under his new contract was held in the summer of 2011 on an event called Best in the World 2011.

At the „Death Before Dishonor“ event in September the same year he called out Steve Corino and had to be escorted from the vent by security.

Rott president Siekin let him fight Steve Corino at Final Battle 2011 in December. Steen won the match and returned to the Ring of Honors.

This win was followed with a series of wins in matches against Jimmy Jacobs, El Generico, and Davey Richards.

He eventually won the Rott World Championship and it was the first time he did it. He became the first Canadian ever to gain this title.

He defended his title in June after winning in the match against Eddie Edwards.

He kept his champ title by defeating Davey Richards at the event „Best in the World 2012; Hostage Crisis“.

He lost the title in April in a match against Jay Briscoe Steen, Corino and Jacobs formed a stable they named S.C.U.M. but S.C.U.M. later turned against Steen and Jacobs defeated Steen.

He entered the Rott World Championship but was eliminated in September 2013 by Michael Elgin.

His next feud was with Michael Bennet who defeated him at Glory By Honor event. Steen expressed his wish to leave Rott after he lost a fight against Shinsuke Nakamura.

In 2014 he signed a contract with WWE, as a part of the NXT brand. He changed his ring name into Kevin Owens which came from his son’s name Owen.

He managed to defeat a wrestler named CJ Parker in his first fight for WWE event NXT TakeOver: R Evolution.

He fought for the title at NXT TakeOver: Rival event which was held in February 2015. He won the match and gained the title. He lost his NXT championship title in a match held in Toky where he was defeated by Balor.

However, he held his NXT title on the main roster after defeating Zack Ryder and Heath Slater.

He defeated John Cena the same year but lost in the rematch. The two of them fought for the US Championship which Cena won.

His first title for Intercontinental ended by him getting it in a match against Ryback. He defended it against Ryback again in „Hell in a Cell“.

He lost a fight against Dean Ambrose in Survivor Series which opened a feud with him. He defeated him and later made it to the 2016 Royal Rumble match.

His second Intercontinental title came in 2016 when he defeated Ambrose, Stardust, Ziggler and many more.

He kept the title until Wrestle Mania 32 where he lost it to Ryder. He also qualified into 2016 Money in the Bank but lost.

He was drafted to Raw in 2016 and won his 1st world title in WWE in August 2016. He became a co-captain of Team Raw at Survivor Series. He lost his title after over 180 days, defeated in a match with Goldberg.

In Wrestle Mania 33, Owens won the US Championship after defeating Jericho.

After joining the 2017 WWE Superstar Shake-Up he changed his appearance and started referring to himself as „Face of America“.

He turned from his Face of America gimmick to Prizefighter.

Owens wanted another chance for the US Championship title and demanded Shane a fight but Shane didn’t want to.

After Kevin started insulting his children Shane attacked him and got himself suspended.

He managed to defeat Shane at Hell in a Cell, with the help of Zayn. Zayn and Owens started a feud with The New Day and Xavier Woods.

In 2018 Owens became a free agent and came to Kurt Angle in Raw to ask him for a job.

Kurt Angle decided to offer him and Zayn a match between them and told them that the winner of the match will be awarded a Raw contract.

He tried to qualify for the Money in the Bank but unsuccessfully.

He wanted to partner up with Strowman but he rejected it and the two of them met in a cage match at Extreme Rules.

He was defeated by Strowman at the Summer Slam event in July. He suffered injuries in October in a match against Lashley and had to undergo a surgery.

He returned to fighting in February 2019. He participated in the 2019 King of the Ring event but lost.

He has two kids, a girl named Elodie Leila and a son Owen Steen from his marriage to a beautiful woman named Karina Elias.

Karina and Kevin are very close and he often says that she is the backbone of their marriage and household.

He is very grateful for the fact that she raises kids alone a big part of the time when he travels all around the country fighting.

Kevin is very close to his son who admires his dad’s work and thinks he is very courageous.