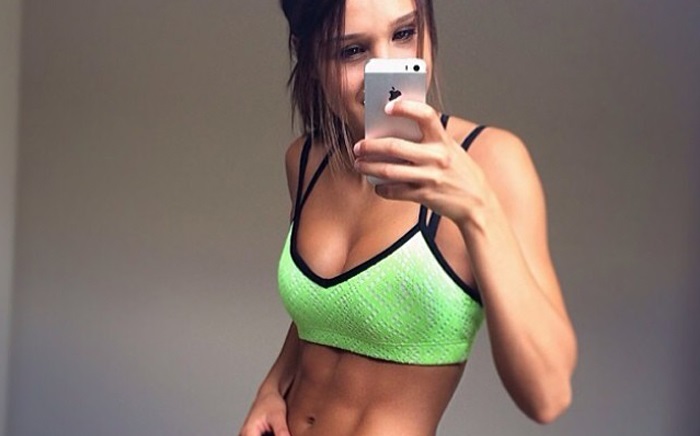 Kayla Itsines is an Australian personal fitness trainer for women who created the Bikini Body Training Guide that made her extremely popular on social networks and YouTube.

This highly educated fitness enthusiast has more than seven million followers on Instagram alone. Find out how Kayla Itsines became so popular, what is her workout and diet routine, what makes her so special and how much does she earn.

Kayla was born in Adelaide, Australia on the 21st of May 1991 to Greek parents.

As a child she was underweight and had health problems. At the age of 15 she was diagnosed with endometriosis, a medical condition that affects women and causes infertility. Kayla had to undergo a surgery and the experience made her search for a healthier lifestyle and she eventually turned to fitness.

Itsines worked out at a gym, with time fell in love with fitness and decided to become an educated trainer. In 2008 she graduated at the Australian Institute of Fitness and began working at a women’s training center.

While working with clients at the women’s gym Kayla observed that the existing workouts did not give satisfying results. She realized women usually seek out three results of training: flatter abdomen, smaller thighs, and toned arms. So Kayla Itsines made her own routines focusing on tackling those goals and started working as a mobile personal trainer.

As she was training her sister’s friends, the teenagers made before-and-after photos of their fitness progress and posted them on Instagram. It started an avalanche of followers for Itsines. Her partner Tobi Pearce then suggested making an e-book of Kayla’s routines and selling it online.

Kayla Itsines also started a YouTube channel at the end 2012 that today has 180 thousand followers and almost 20 million views for about 130 uploaded videos.

Kayla’s program is meant to help one achieve slim and fit physique full of strength, but without bulk.

In 2015 she released an app called “Sweat with Kayla” that was met with criticism by users. The app got bad reviews mainly because of the costs and difficulties with cancelling subscriptions.

She has even published a print book in 2016 called „The Bikini Body 28-Day Eating and Lifestyle Guide”.

Kayla Itsines has a younger sister named Leah, who is also a personal fitness trainer. Their parents Anna and Jim Itsines are both teachers.

Kayla is currently in a relationship with a fitness trainer and model Tobias Pearce, who is also her business partner and the CEO of The Bikini Body Training Company. They met at the gym and have been living together since 2011.

Kayla Itsines took the first place on the Forbes ‘Top Influencers’ list in the field of fitness. She is rumored to be making as much as $150,000 per Instagram post.

She sells branded fitness related products and a mobile app. Her net worth is estimated to be $9 million.

The Bikini Body Guidelines are based on 28-minute intensive workouts three times per week and meal plans providing up 1.800 calories per day – a strategy aiming nether at weight loss nor on muscle gain, but on creating a particular slim physique.

Itsines regretted she chose the name Bikini Body Guidelines, feeling it wasn’t made clear enough that Bikini Body is not only a slim body, but a body of a person that feels comfortable, strong and great about themselves.

Kayla writes and posts on all of her social media platforms by herself.

Itsines doesn’t drink alcohol at all since 2011 since she believes it’s important for a healthy lifestyle. Her aunt died of alcohol poisoning.

Kayla appeared in an advertisement for the Apple Watch and demonstrated the heart-rate monitor.

Kayla Itsines is a personal fitness trainer for women and an online celebrity who created the Bikini Body Training Guide and is followed by 12 million people on Facebook and seven million on Instagram.

This highly educated fitness enthusiasts owns a hit mobile app and a printed book. She takes the first place on the Forbes ‘Top Influencers’ list in the field of fitness. Her net worth is estimated to be $9 million.

She lives in Adelaide, Australia with her boyfriend fitness trainer and model Tobias Pearce.