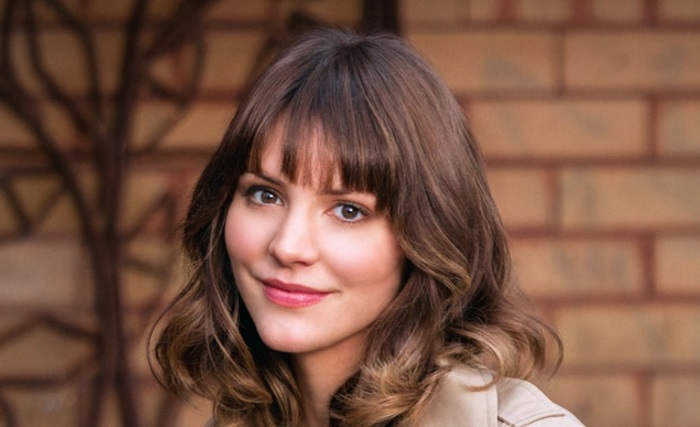 Katharine McPhee is an actress, a songwriter and a singer from the United States.

She became known in 2006 after she was the runner-up on the fifth season of a competition TV show American Idol.

Only a year later she released her debut studio album through RCA Records. This album went to the second place on the Billboard 200 list. A song called „Over It“ was in Pop Top 30 list and became certified gold in 2008.

She released her second album titled Unbroken through Verve Forecast Records in 2010 and it went to No. 27 on the Billboard 200 list. The most known single from it is „Had It All“.

Her third album was a holiday one, titled „Christmas Is The Time to Say I Love You“. It was released in 2010.

This album went to the 11th place on the Billboard Top Holiday Albums list. The most notable single is „Have Yourself a Merry Little Christmas“ which went to No.16 on the Billboard AC chart.

In 2015 she released her fourth album titled „Hysteria“.

In 2017 she released her fifth album „I Fall in Love Too Easily“.

Katharine also acts and some of the movies she starred in are Shark Night 3D, The House Bunny. She was also in series called Smash and also one called Scorpion.

Katharine was born on March 25th in 1984 in Los Angeles, located in California, United States.

Her father is Daniel McPhee and he was a television producer and her mother is Peisha McPhee who works in music niche.

When Katharine was 12 her family moved to Sherman Oaks in Los Angeles. That was when her mother realized that her daughter has a talent for singing and she trained.

Katharine is very close to het sister Adrianna who works together with their mum.

She went to the Notre Dame High School which is located in Sherman Oaks. At that time she frequently performed in most school projects.

She graduated from it in 2002 and continued her education in the Boston Conservatory. She majored in musical theatre. She left the conservatory before she graduated and she returned to Los Angeles to try and audition.

He got a role in an MTV soap opera pilot titled „You are Here“ but the pilot was never aired and it didn’t become a series.

In 2005 she had the role of Annie Oakley, in a musical called „Annie Get Your Gun“.

In 2007 she got a role in a musical film titled Crazy, which was a small independent film. This movie is based on a life story of Hank Garland, a guitarist and a songwriter that was popular in the ’50s.

McPhee shared that she struggled with eating disorders in the past. When she was only 13 years old she started starving herself and exercising in unhealthy amounts. When she was 17 she became bulimic.

She gained some weight in college because she was binge eating. She fought with the disease for seven years, and after she passed the audition for American Idol she went to rehabilitation for three months. This was in 2006.

In 2007 she talked to Teen Vogue and stated that she now has a healthy diet.

In 2005 her parents and her husband Nick Cokas made her audition on a TV competition called American Idol. The audition was held in San Francisco and she performed „I’ll Never Love This Way Again“ originally by Dionne Warwick.

She passed the auditions and in the second round performed “I Can’t Help Myself (Sugar Pie Honey Bunch)” originally by the Four Tops.

In the third round, she performed an a cappella version of „My Funny Valentine“. With this performance, she entered the Top 40 on the competition.

She then performed „Since I Fell for You“ by Ella Johnson and continued the competition.

She performed Stevie Wonder’s „All in Love is Fair“ and got good feedback.

With this, she was in Top 16 competitors. She then performed Aretha Franklin’s „Think” and again passed the round.

She was in Top 12 contesters after that round.

In the finals, she performed „Until You Come Back to Me” by Stevie Wonder, „Come Rain or Come Shine” by Sy Oliver, „The Voice Within” by Christina Aguilera, „Bringing Out the Elvis in Me” by Faith Hill, „Who Wants to Live Forever” by Queen, „Someone to Watch Over Me” by Gertrude Lawrence, „I Have Nothing” by Whitney Houston, „Black Horse and the Cherry Tree” by KT Tunstall, „Hound Dog” and „All Shook Up” by Elvis Presley, „I Believe I Can Fly” by R. Kelly.

After all the performances she was in Top 2 with Taylor Hicks. She then performed Black Horse an The Cherry Tree“ again, „Over The Rainbow“ by Judy Garland and „My Destiny“ her song.

Taylor won and Katherine was a runner up.

In June that year she had a duet with Andrea Bocelli singing „Somos Novios“.

In June of 2006, she released her single „Somewhere Over the Rainbow/My Destiny“ by RCA Records. This single ent to No.4 on the Billboard Hot Singles Sales chart. It was the second most sold single of that year, after Taylor Hicks’ single „Do I Make You Proud“.

In July she could be in the first three weeks of the American Idol Tour because she had bronchitis and laryngitis. She joined the tour in Washington but performed only two songs „Black Horse and the Cherry Tree“ and „Over the Rainbow“, because of her health.

While performing in Charlotte in North Carolina she fractured her foot and had to wear a cast.

After she recovered from this Injury she added another song, „Think“, to her setlist.

In November of 2006, a CD/DVD package of Bocelli’s Under the Desert Sky album was released and it had a duet with Katherine on it. They sang „Can’t Help Falling in Love“.

In 2016 McPhee also became a spokesperson for Sexy Hair Concepts and their product line. Many people realized that she is very photogenic and that she has a warm smile, which lead to her campaigns.

That same year she founded a charity that she named „McPhee Outreach“.

This foundation teamed up with the Lollipop Theatre Network to provide a program called „Rhythm of Hope” too sick children in hospitals in Southern California.

They also teamed with the West African nation of Burkina Faso to help with their high illiteracy rate.

In December of 2006, she released „A Gift to You/ O Come All Ye Faithful“. It was produced by Al Gomes and Walter Afanasieff.

In January of 2007, she released an album titled „Kathrine McPhee“. This album debut in second place on the Billboard 200 Albums chart.

The single „Over It“ went to No. 29 on the Billboard Hot 100. She was very happy for the appreciation that she got and she wanted to keep working on her future songs right away.

She also had a cameo on „Ugly Betty“ in an episode „I’m Coming Out“.

In 2008 she was dropped by her label RCA Records.

In 2008 she did her first commercial for Neutrogena for their anti-acne line of products.

She was in a comedy „The House Bunny“ that was released in the summer of 2008. She released a cover of „I Know What Boys Like“ featuring the cast member of the movie.

In January of 2009, she signed to Verve Forecast Records.

That year she also starred in CSI: NY in an episode called „Prey“.

In September that year, she took part in a concert „An Evening of Stars“ by the United Negro College Fund’s and the concert was a tribute to Lionel Richie.

She has also done work for Stand Up to Cancer organization.

In November she released another Christmas single called „I’ll Be Home for Christmas“.

In January of 2010, she released an album called Unbroken which went to No.27 on the Billboard 200 chart. It was produced by John Alagia.

The same month she appeared on an episode of „The Biggest Loser“.

In February of 2010, she appeared in 110 Stories directed by Mark Freiburger. This play was made to help people after the Haiti earthquake. Everything they earned went to the Red Cross of Greater Los Angeles.

She was also on Community, a comedy tv series, in an episode titled „Basic Genealogy“.

In April of 2010, she made a TV pilot for The Pink House. In it, she played Emily, a midwestern girl that comes to LA.

In May she made a second version of her song „Terrified“ with Zachary Levi and it was available on iTunes.

That year she also worked with Feeding America and also ConAgra Foods Foundation. She traveled with them around the country to spread awareness.

In October of 2010, she released a Christmas album called „Christmas Is the Time to Say I Love You“.

This album went to No.11 on the Billboard Top Holiday Albums chart. This was great for her sales.

In June that year, she signed a deal with Columbia Records to do music for Smash.

She was also in „Shark Night 3D“ directed by David Ellis that was released in September of 2011.

In 2011 she became the spokesperson for the Malaria No More organization.

She also did a voiceover for Family Guy and played the voice of Mother Maggie.

She also had a cameo in Peace, Love & Misunderstanding.

In 2009 she was cast for a lead role in You May Not Kiss the Bride, in which she played Masha. She co-wrote songs for this movie. The movie was successful and earned $6 million.

She also got the role of Paige in Scorpion, an action drama.

From 2017 Katharine is in a relationship with a popular producer David Foster. They got married in London in June 2019.