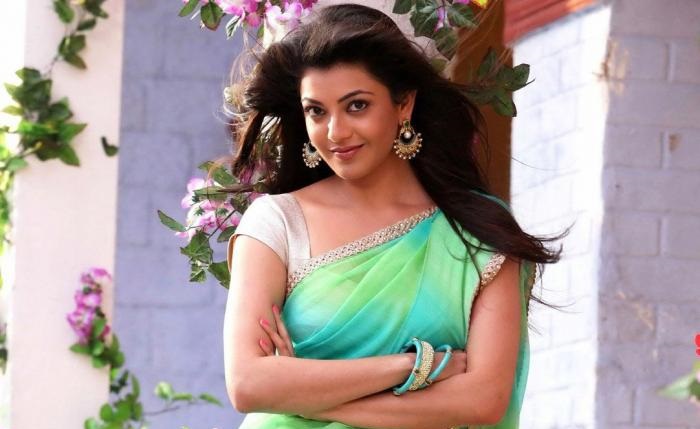 Kajal Agarwal is the name of a very young and beautiful Indian actress and model who gained fame through her films made in Tamil and Telugu.

She has also been a model for a lot of known companies and has a very respectable net worth.

Kajal has tried herself in music too and has started a career as a singer too.

She has been born as Kajal Agarwal on June 19, 1985, in the capital city of India called Bombay, located in Maharashtra.

She has been brought up in the city of Bombay, by her loving parents Vinay and Suman.

Her parents worked in the textile industry but later her mother became her manager.

She grew up alongside her younger sister Nisha with whom she was very close to in their childhood and had remained good until today too.

Her sister also became an actress.

She was a student at St. Anne’s High School, after which she enrolled at the Jai Hind College and later on she continued developing her knowledge by gaining her diploma in the fields of marketing and advertising.

In 2004, after going to several auditions and trying to get a role in a movie  she succeeded in it. She gained her first role in a movie called Kyun…! Ho Gaya Na. Although she had a small role in the movie she was very happy about it.

Her first Telugu movie role was also her first lead role. It was in the movie named Lakshmi Kalyanam, which was released in 2007.

She starred in it alongside Kalyan Ram. The movie was not very well received by the public and the critics and it did not earn a lot of money at the box office.

Her first successful leading role was in a move called Chandamama, which premiered the same year.

2008 was the year when she released her first Tamil movie named Pazhani, where she starred alongside Bharath.

In 2008 she had released two more movies, both in Tamil. One of the movies was a comedy movie named Saroja and in a thriller movie titled Bommalattam.

Both of the movies were successful but didn’t have a larger impact on her career because her roles weren’t leading roles.

She had also two movies made in Telugu too but hey we’re not very well received. She was a little bit disappointed by this but she did not despair because she knew that she was good at her work and that her time will come.

In 2009 she had four movies released, both in Tamil and Telugu.

Her first appearance was alongside Vinay Rai in a movie called Modhi Vilayadu. The movie wasn’t interesting to the critics and it was also a bus at the box-office.

She played two roles in a very expensive movie Magadheera, where she starred alongside  Ram Teja. She has received her first critical praise and the movie was a huge success in the cinema.

Her role as a princess brought her the first nomination for an exclusive Filmfare Award in the category of the Best Actress.

In 2011, this movie was re-released but in Tamil and has also broke records at the box-office.

However, her next movies were not as successful. Her performance was considered as good but the movie did not receive great critics.

In 2010, she appeared in a romantic comedy movie titled Darling which turned out to be a success and has earned a lot of money at the box-office.

This movie brought her the second nomination for the Filmfare movie Award, again in the category of the Best Actress.

Her performance later that year was in a thriller film named Naan Mahaan Alla, where she starred alongside Karthi, which turned out to be a box office success.

That year she also released a romantic comedy called Brindavanam, a very well-received movie that turned out to be a major hit and gaining her a movie award she was very proud of: the CineMAA Award. It was in the category for Best Actress.

In 2011, she starred in a comedy movie titled Mr. Perfect, which was a huge hit from the beginning and it was praised both by the critics and the viewers.

Her partner in the movie was Prabhas and they seemed to have great chemistry which everybody noticed.

This move brought her another nomination for the Filmfare Award.

Her next movie called Veera, in which her movie partner was Ravi Teja received mixed reviews.

She had starred in a police movie called Singham, together with Ajay Devgn. The movie received mixed reviews from most of the critics but was a hit in the cinema and was very well received by her fans.

However, she was praised for her role and she gained to nominations: for the Filmfare Award and the Zee Cine Award.

Her last movie that year was titled Dhada, but it was a miss.

Her first release in 2012, was a gangster movie named Businessman, where she had a smaller role. The movie was a success and she was praised for her performance although it was not a huge role.

The movie named Thuppakki, in which she had the role of a boxer turned out to be a huge hit in Bollywood. It earned over $10 million which is a huge deal for a Tamil movie.

The other movie released in 2012 was a romance named Sarocharu, but the movie was not interesting to the critics.

In 2013, she appeared in an action movie called Naayak, which was a huge commercial hit and was praised by the critics.

Her role in the movie Baadshah brought her praise from the critics which described her performance as the sight for sore eyes.

in 2014, she played the role of a police officer in Jilla and had a minor role in Yevadu. Her appearance in a family drama called Govindudu Andarivadele brought her positive reviews from all the movie critics. At this time she was already an established actress and had a very huge fanbase.

In 2015, her first movie of the year was a Telugu action movie called Temper, where she played the role of a person whose life revolves around animals. The film was a success and her performance was considered well.

In the summer of 2015, she starred in a gangster comedy movie named  Maari, where she starred alongside one of the most popular Indian actors named Dhanush.

The movie was a commercial success but the critics weren’t that pleased by it. The other movie she released that year was an action movie called  Paayum Puli, but it was a failure.

In 2016 she appeared in Sardaar Gabbar Singh Telugu movie and although her performance was great the movie was not considered a good movie. Interesting enough the movie was financially successful.

In the summer of 2016, she performed a song called Pakka Local which was very well received and had a lot of radio air time.

In 2017 she appeared in a Telugu action drama movie named Khaidi No. 150. Her performance was praised by the critics.

She became the No.1 on the list of Most Desirable Women in 2016.

In 2017, she starred in the Political drama named Nene Raju Nene Mantri, and she received good critics for her role.

Then she appeared in a movie named Vivegam, which was again a hit. Her third role was in Mersal, which became one of the biggest hits of the year. She drew attention to her although she was in the supporting role.

In 2018, she appeared in the Telugu movie called MLA.

She is the brand ambassador of the Celebrity Cricket League and for Lux.

During her career, she had starred in numerous commercials and had endorsement deals with a lot of companies like Samsung, Sri Lakshmi Jewellery, Green Trends, and more.

The actress hides her private life very firmly but in 2019 she was a guest on a show where she discovered that she will get married soon but did not want to reveal the name of her partner.

Before this, it was rumored that she was dating her movie partner Prabhas.