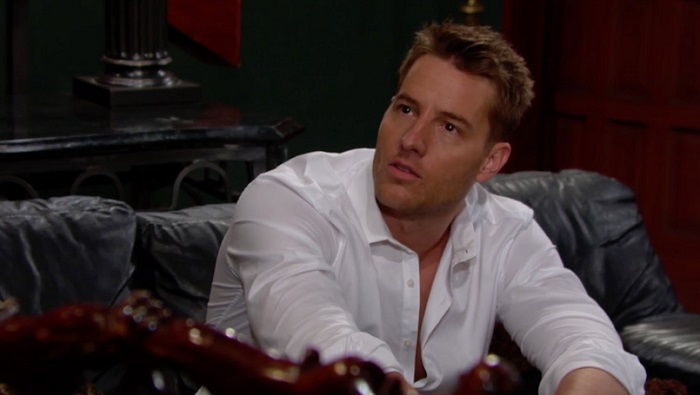 The star of Passions, Smallville, The Young and the Restless, Revenge and This Is Us, is the American heartthrob Justin Hartley.

Born and raised in Knoxville, Illinois Justin decided early on acting was his true path.

After earning his history and theater degree, Justin soon caught his big television break starring in many soap operas, drama series and quickly gaining the affection of the public.

In this article you will find out about his early years, career development and personal life. You will have the opportunity to learn about Justin’s net worth, interesting facts about his life, and many more.

Justin Hartley was born on January 29th 1977, in Knoxville Illinois, United States. He was born as Justin Scott Hartley and he is the second of four children of Mark D. Hartley and Jackie Hartley.  Justin has a brother named Nathan, and two sisters, Megan and Gabriela. They were raised in Orland Park, Illinois. After finishing the Carl Sandburg High School Justin enrolled in Southern Illinois University Carbondale. Subsequently he majored history and theater at the University of Illinois at Chicago.

Justin decided on his career path at a very early age, so not long after graduating theatre and history at the University of Illinois, he caught his first acting break by landing a role on NBC’s Passions, a daytime soap opera that ran from 2002 to 2006.

By portraying Fox Crane, short for Nicholas Foxworth Crane, young and rich bad boy on Passions, Justin perfected his acting skill, and became very popular with the viewers. He played the role of Fox from 2002 to 2006, and was often viewed as the audience’s favorite character. After Justin, Mark Cameron Wystarch took over the role of Fox Crane. Justin gained notoriety and many acting opportunities after this role, including the starring role in CW’s pilot Aquaman.

Justin delivered a brilliant performance but Aquaman unfortunately wasn’t picked up as a series. He gained more fame playing the role of Oliver Queen, a young billionaire on the hit show Smallville. As a part of the Smallville cast Justin had the opportunity to co-write and direct a couple of episodes on the show.

In 2012, side by side with Mamie Gummer, Justin portrayed the role of Will Collins, a heartthrob surgical intern, and Mamie’s character’s love interest. The show was canceled in 2013 after just one season. After the show’s cancelation Justin moved on to pursue minor roles on Chuck, Castle, Heart of Dixie and played the role of Patrick Osbourne, the son of Victoria Grayson, on ABC’s Revenge.

Justin’s biggest success comes from portraying the role of Adam Newman on CBS’s The Young and Restless, which earned him an Emmy Nomination in 2016.

Justin landed a role in NBC’s This is Us in 2016. Dan Fogelman, who created the show, revealed that the role of Kevin Pearson was created specifically for Hartley.

Justin Hartley’s private life started to be of public interest when he obtained the role of Fox Crane. This role was very important for Hartley in many ways, besides the fact it propelled him to fame, Hartley met his then future wife to be, Lindsay Korman who then played the role of Theresa Lopez- Fitzgerald. Hartley and Korman married in 2004, but separated just eight years later. They have a daughter Isabella Justice, born on the 3rd of July, 2004.

Justin Hartley has been dating Chrishell Stause, a fellow actor from 2014. They met on the set of The Young and the Restless in 2014, and have been engaged since 2016.

Justin Hartley has an estimated net worth of $5 million dollars he earned from his acting.

Hartley is active on social media such as Facebook, Twitter and Instagram. He shares interesting moments from his life, new and upcoming projects, and interacts with fans on a daily basis. Here are the pages of his social media profiles.

Justin Hartley is known for his amazing physique. He has often spoken about how important a healthy lifestyle is. He is a very devoted actor that goes all the way in preparing for his roles. He hired a personal trainer for his role in Smallville, with the purpose of giving the maximum to the role, both mentally and physically.

Born and raised in Illinois, Hartley was very certain at a very young age, of what his occupation in life would be. Graduating from University of Illinois at Chicago, majoring history and theater, Justin soon caught his big break on a hit TV show Passions. The role of Fox Crane propelled Justin to fame, opened many doors, and made him one of the household names in television in the 21 century.

This American heartthrob, active since 2002, doesn’t show intention on slowing down, gaining more success, and notoriety as the time goes by. He is one of the favorite TV screens faces of our time.