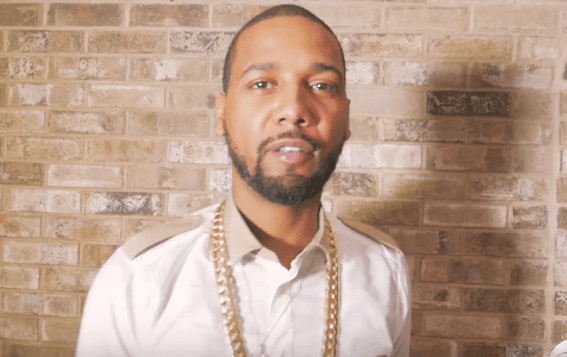 Juelz Santana is a popular East Coast rapper and an actor from the United States who is also a member of a known hip hop group „The Diplomats”. He became pretty famous because of this group and he, therefore, enjoys talking about his crew.

He became a successful rapper at a very young age and has also made several hits. He was always into music and that’s why he wants to encourage others to know that they can also fulfill their dreams.

He was born as LaRon Louis James on February 18, 1982, in New York City in the United States. Little did he know that he was going to have many opportunities because of being born in such a big city.

He was raised in Harlem by an African American mother and a father who originates from the Dominican Republic. He has great respect for his parents and they love to talk about his son as well. Many people think that he is so kind because his parents raised him to be very tolerant of other cultures as well.

He was raised in a low-income family and knew from an early age that the only way for him to move up is to get into music or sports. He spent a lot of time trying out different hobbies because he wanted to succeed in life, but he wasn’t yet sure what he was going to do.

He knew that because he had seen a lot of young people from Harlem to become successful musicians or athletes.

He was only 12 years old when he formed a duo named „Draft Pick“ and they were soon signed to a record label named „Priority Records“.

He was 18 when he appeared on Cam’ron’s album as a guest appearance which brought him wide recognition.

Cam’ron is a very known East Coast hip hoper and the leader of the group named „The Diplomats“. Juelz guest appeared on his album titled „S.D.E.“ and later joined his famous hip hop group.

Cam’ron was impressed by Juelz’s talent and they became good friends. This helped him get some collaboration as well.

In 2002, The Diplomats signed a contract with another record label „Roc.a-Fella” records and Santana began developing his career through various collaborations and interviews which brought attention to him and his work.

He released his solo mixtape titled „Final Destination” in 2002. He was featured in two Cam’ron’s songs that years: “Hey Ma” and the other one was named „Oh Boy“.

Juelz began working on his first album in 2002 and has released it in 2003. He was very dedicated to make it professional and therefore was trying his best to create music everyone will listen to.

It was titled „From Me to U“ and it went as high as No.8 on Billboard 200 chart. This was a huge success for him as well.

His second studio album was named „What the Game’s Been Missing” and it was released at the end of 2005 by Diplomat Records and Def Jam Recordings. It was very well received. He was so happy the audience was thrilled to listen to his music and he decided that he would also dedicate more to other projects he will make.

One of the songs on the album was named „Make it work for Ya“ and it was featured by Young Jeezy and Lil Wayne who were prominent rappers at that time.

He began having more interviews and public appearances than ever before. This is one of the many reasons why he gained an audience quickly.

In 2005 he appeared in „Run H!” by Chris Brown, also in collaboration with Yelawolf. He has also released „Days of our lives“, featured by Skull Gang. There was some trouble when Chris Brown ran into controversy later on and Santana was connected to him so he had to move away and cut their friendship.

In 2008 he has released a promo single named „The Second Coming” for his 3rd album titled „Born to Lose, Built to Win”. It was produced by Just Blaze and released in 2008. It was a great song and received good feedback.

Juelz made a two-year pause until he returned to music in late 2009. That is when he released „Mixin’ up the Medicine”.

In 2010 he has released another single, titled „Back to the Crib” and it was featured by Chris Brown.

„God Will’n” is the name of his last mixtape: he had several artists featured on it: from Whiz Khalifa, Yo Gotti to Lil Wayne.

He released „All We Got Is Us” mixtape the same year, followed by „God Will’n 2″.

Santana lives in Englewood with his family. He is married to Kimbella Vanderhee and has two children: a son Juelz born in 2010 and a daughter Bella born in 2012.

He got married to Kimbella in 2019 after he proposed to her on The Diplomats Show in 2018.

Juelz had a girlfriend with whom he has a child way back before Kimbella and it is a son named LaRon Louis James Jr. LaRon was born in 2003 and Juelz is involved in raising him.

Juelz grew up alongside his brothers: DeMar James, Jermaine James, Malik James, and Mark James. DeMar and Jermaine are both great athletes: DeMar is a basketball player and Jermaine is a taekwondo champion.

Juelz was in a relationship with Karrine Steffans who is known for the book she has released titled “The Vixen Dairies” where she wrote about her relationship to Juelz and described him as a great boyfriend and a lover.

In 2007 he fell in love with Remy Ma but she wasn’t into him the same way. They had a short fling.

In 2009 he had met Kimbela Vanderhee, a TV personality, and a model. The two of them met when she was working with Chris Brown on his video titled Back to the Crib.

In 2015 he bought a house for them to raise their children in and settle.

Jules and Kimbela had relationship issues because of his cheating character. It was reported that he had cheated on Kimbela with a woman named Lethal Lipps in 2010 while Kimbela was pregnant. Lethal Lipps is an adult film star.

The same year he cheated on her with Jenna Shea, an American actress, and the information was confirmed by herself on Twitter.

He likes to wear a bandana very much and he does wear it in most of his photos.

Jules was honored for his soundtrack to be used in a Nike commercial named “The Second Coming”.

He appeared in a movie named State Property 2. In 2005, he played himself in that movie.

It was the same year he had his appearance in the Tonight Show with Jay Lenno.

Jules has his own studio in Bergenfield in New Jersey and he named it Santana’s World.

In 2011, Jules was arrested for carrying a  firearm and didn’t have a permit for it. And for possession of drugs.

It was right after his studio was raided and marijuana and guns were found there. In 2018, he was on the Newark Liberty International Airport when it was discovered that he has guns in his luggage.

He fled the scene but was soon caught and afterward sentenced to the prison sentence of 27 months.

His hip hop group released an album titled Diplomatic Ties after 14 years of hiatus so he toured with them while out on bond.