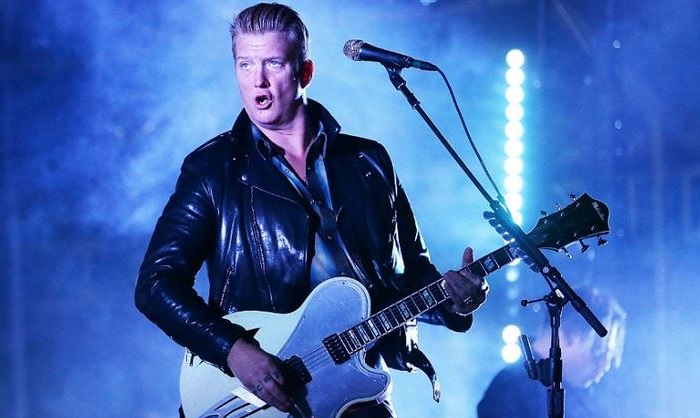 Josh Homme is a known American singer, musician, songwriter and actor who is best known as the artist who founded a popular rock band named Queens of the Stone Age.

Josh was the songwriter, vocalist, and guitarist of the band but he is also a skilled drummer and pianist. He has several nicknames like Baby Duck and J. Ho.

He was born as Joshua Michael Homme on May 17, 1973, in a town Joshua Tree, located in San Bernardino County in California, United States.

He grew up alongside his older brother Jason and was raised by his parents Irene and Michael.

Josh is of mixed descent, having his predecessors from Norway, England, France, Germany, and Sweden.

His family was very well known in his city since his father was a contractor and has built a lot of houses in that area.

The Homme family moved a lot since his father’s work took him in a lot of places. He was nine years old when he asked his parents to buy him drums but they denied him the wish.

Instead, he received his first guitar and gained lessons for it. He was 12 years old when he entered a band names Autocracy. It was in 1985.

In 1987, at the age of 14, he formed his own band together with his friends from school. John Garcia and Brant Bjork.

The band has changed their name several times until it became “Kyuss”. The band was oriented to heavy metal and punk rock fusion. The band gained a lot of od followers in a few years of their work.

They had no problems driving to the desert to meet their fans and have concerts with the use of a generator. These concerts were called “Generator Parties” and they brought them recognition, making them an urban legend.

The band ultimately gained a lot of fans and became notorious for the fights they obtained with local bands in the Los Angeles area.

They were first noticed by Chris Goss, a record producer who was also a guitarist. He became their manager and mentor and did anything the could find a label that would release their authentic music.

Josh wasn’t even 18 when the group signed to a label so his parents did it for him.

The band has released four albums which are considered to be very important for the development of the stoner metal rock music genre.

The Kyuss released its debut album “Wretch” in 1991 through Dali record label and the album was co-produced by all of his members. The following album eas named “Blues for the Red Sun” and it came out in 1992 but had very poor sales.

Their third studio album was named “Welcome to Sky Valley” and it was released by Elektra Records in 1994.

The last Kyuss album was titled “… And the Circus Leaves Town” came out in 1995.

The band split up in 1995 and Josh decided to take a hiatus in music. He enrolled at the University of Washington and relocates to Seattle, making an effort in business studies.

He made several appearances in music events, mostly as a guitarist for other bands like the Screaming Trees.

This eventually took him to form his new band “Queens of Stone Age” in 1996. Although he intended to make a band in Seattle and offered a place, in the end, he returned to Palm Desert.

The band consisted of ex-members of Kyuss like Nick Oliver and Dave Catching. In 1998 the band has released their debut album called “Queen of the Stone Age” through Loosegroove Records.

Their next album was named “Rated R”. It was released in 2000 though Interscope Records. It was produced by Chris Goss and soon became a hit album.

In 2002 they released “Songs for the Deaf” album which had many guest musicians from bands like Nirvana and Foo Fighters. The album was noticed by the public and has received positive reviews.

In the next two years, Homme had disagreements with Nick Oliveri so he fired him from the band. It was in 2004 and Josh was so upset that he almost broke up the band.

Their first commercially successful album was a 2005 “Lullabies to Paralyze” which went to No.5 on the Billboard 200 chart. Homme has written almost all songs on the album.

In 2007 the band has released another successful album called “Era Vulgaris” released again through Interscope Records. After the release of this album, the band took a break which lasted for 6 years.

During that period Josh turned to his solo career. Josh was known for his Desert sessions where a lot of music was recorded and a lot of artists have contributed to the recordings.

Other than his work with Queen of the Stone Age, Josh also founded Eagles of Death Metal in 1998 which was strongly tied to his Dessert Sessions.

The other member of the band is his friend Jesse Hughes who is the band’s writer, singer, and guitarist while Homme plays other instruments and produces songs.

They have released four albums together, with last being released in 2015 by Downtown Recordings under the name “Zipper Down”.

In the summer of 2009, together with Dave Grohl and John Paul Jones, Josh had recorded an album called “Them Crooked Vultures” for the same-named project.

The band went on a world tour and received a Grammy Award in the category of Best Hard Rock Performance in 2011.

Homme was also one of the contributors to the soundtrack of a movie directed by Peter Care in 2002. It was a comedy-drama movie named “The Dangerous Lives of Altar Boys”.

In 2010, he was a guest on Tosh O on Comedy Central where he performed a song “What What” together with Samuel Johnson.

In the summer of 2012, he starred in Glen Campbell’s music video.

He was often invited to make appearances in TV comedy series like Toast of London, House of Fools and Portlandia.

In 2015 he became a host of his own show named “The Alligator Hour with Joshua Homme” which was aired on Beats 1 radio station.

In 2016 Homme and Iggy Pop released an unexpected album titled “Post Pop Depression”. He always liked to collaborate with Iggy Pop and thinks his work is outstanding.

In 2013 he decided to start a charity foundation under the name “Sweet Stuff Foundation”.

The base of the foundation is in Palm Springs in Florida.

Its goal is to help musicians and their families who became ill or gained disabilities which disabled them to work and earn money.

It also helps in providing quality music programs for children who have no possibilities to get music education.

As for his personal life, the first more serious relationship he had was with a musician Brody Dalle whom he met in 2003.

This serious relationship ended up to be the best thing in his life because his wife is his biggest fan and supporter.

They got married in 2005, and live together at Hollywood Hills. They have two sons and a daughter.

Brody is a singer who was a member of bands named The Distillers and Spinnerette.

Her marriage with Josh is her second marriage. She was married to a musician Tim Armstrong from 1997 to 2003.

He is very close to his wife and kids and he spends a lot of time with them. They often travel and he uses that time to build a good relationship with them.

Josh is known for his love for tattoos. He has a lot of names tattooed on his body: his grandparents and his children.

He also has his nicknames tattooed all over his body and has several shared tattoos with his bandmates.

He is not into politics but he considers himself to be quite liberal. In 2017 he told that US President D. Trump is retarded.

In 2010 he was severely ill after getting infected with MRSA and he eventually has a cardiac arrest.

He was saved by the doctors but felt into a depression. He claims that Transcendental Meditation helped him a lot.

He is also a heavy smoker. This serious condition opened his eyes to keeping a healthy lifestyle but he can not stop smoking.

Josh has problems with drugs and alcohol which caused him to do various things like kicking a photographer, his kicking fans and even some of his friends.