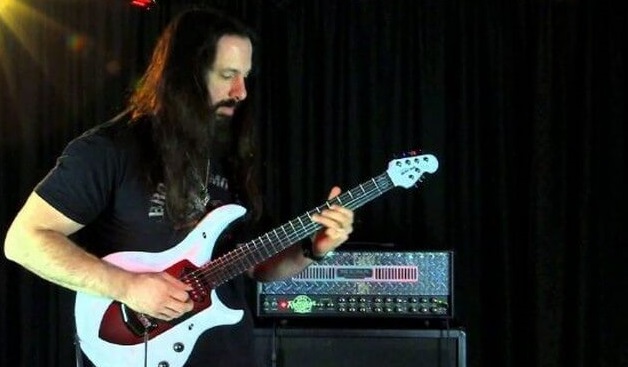 If the name John Petrucci rings a bell but you don’t know where have you heard about him,  you have probably heard about his metal band named Dream Theater.

John is the founder of the band and has such great guitarist skills that he had been nominated for a Grammy Award for his performances.

Other than being a guitarist of the above-mentioned band he is also the main producer and songwriter of the band.

He was born as John Peter Petrucci on July 12, 1967, in a part of New York named Kings Park. It is located on Long Island where he had spent all of his childhood.

His family was of both Italian and American origin and was very musical so he was surrounded by music from a very early age.

His older sister played the organ so he was allowed to get an instrument too. Although he stopped playing it for several years everything changed when he became a teenager.

He was a young teen when he realized that he would like to be a musician when he grows up. He had a dream of having his own rock band and becoming a skilled guitarist.

He was only twelve when he decided to pursue it and he continued playing his guitar which she shortly stopped when he was eight years old.

He was a perfectionist when it comes to guitar playing. He spent a lot of time practicing, mostly it was a minimum of six hours a day.

John was very serious about learning because he was very eager to understand everything about his guitar and to learn all the technical stuff there was to know.

This consumed a lot of his free time throughout the years but he never regret it and when it came to choosing between playing his guitar and doing anything else, the guitar was always the winner.

John was highly influenced by various guitarists and groups from Iron Maiden and Metallica to Steve Morse, Stevie Ray Vaughn to Joe Satriani. Later he was even honored to perform alongside Joe Satriani.

His childhood friend Kevin Moore was a keyboardist so they often played together and it was Kevin that invited John to join him and become a member of his cover band during high school. This helped John learn how to perform as a part of the group.

After finishing high school and graduation he became a student of Berklee College of Music, situated in Boston.

He went to this music college with his friend from childhood named John Myung who played bass. They soon found another passionate musician there. He was named Mike Portnoy and he was a very skilled drummer who soon joined him.

They gathered up as a band and made covers of their favorite bands: Rush and Iron Maiden.

This band they gathered up in college became the core of their future band Dream Theater but the first name of the band was Majesty. They later had to change it into Dream Theater because there was already a band of that name on the music scene.

The demo tape of the group was named Majesty Demos and it enabled them to get the interest of many labels.

The journey to success of this group started in 1988 when they signed a music contract with a record label titled Mechanic Records.

Their first album was released in 1989 and it was titled  When Dream and Day Unite. The band decided to fire one of the members named Dominici and to hire a new member, a Canadian James LaBrie who became the band’s vocalist in 1991.

The album they released in the period when LaBrie first worked with them was titled “Images and Words”, and was certified gold by the RIAA. Until today it has remained the only album ever certified gold with LaBrie in it.

In 1994 the band recorded a new album called “Awake” and Moore decided to leave the group just a little time after its release. The new member of the band became Derek Sherinian and although he was there only to cover Moore’s place during their tour he later became a full member of the group.

In 1998 the group has released their double live album and it was released under the title “Once in a Livetime”. The band received praise for this authentic album.

In 1999, Derek Sherinian was replaced by a new member called Jordan Rudess. He worked with the band on their “Scenes from a Memory” album. This album was a concept album involving a murder mystery. John respects Jordan very much and he later collaborated with him on numerous projects.

In 2002, the band released an album named “Six Degrees of Inner Turbulence” which came out through Elektra Records.

John is especially popular because of his teaching character. He had released an instructional videotape titled “Rock Discipline”. It was in 1995 and the video was a huge hit.

John was also a contributing columnist in Guitar World magazine’s “Wild Stringdom” series of the column.

He has also released two projects in 1998/1999 named “Liquid Tension Experiment” which was highly respected by his fans.

In 2000 he has launched his own record label, which was run by his wife and whose first release was a live music concert recorded in New York under the name “An Evening With John Petrucci and Jordan Rudess”.

This concert oriented on Latin and Jazz music and was made in the collaboration with Jordan Rudess.

2003 brought him the honor of joining the G3 tour where he was invited by the tour’s main stars Joe Satriani and Steve Vai.

He went to Mexico and Japan on tour with them and later even to Australia in 2005. He also joined the tour in North America in 2007, but this time with Joe Satriani and Paul Gilbert.

In 2005 he had finally released his solo album which was one of the most anticipated albums of the year. He released it through his own Sound Mind Music label and gave it the name “Suspended Animation”.

He produced the album himself and made it in collaboration with Dave LaRue and Dave DiCenso.

John is a devoted owner of Ernie Ball model guitars and has several of his own signature models made especially for him. They are named “John Petrucci BFR”.

In 2003 their new album came out under the name “Train of Thought”. It was also released through Elektra records.

In 2005 Octavarium was released but this time through Atlantic Records.

The band decided to release an anniversary album named “Score”, which was released for the band’s 20th anniversary.

The next album they released was their ninth studio album titled “Systematic Chaos” and was released through Roadrunner Records.

In the summer of 2009, it was followed by No.10: an album titled “Black Clouds & Silver Linings”. After the release of this album, one of the founders of the band, the drummer M. Portnoy left the band.

After they have lost him the band went on the search for a new member and they even made a documentary about it. It was titled “The Spirit Carries On” and it spoke about their quest for a new member which ended when they found Mike Mangini, a professor at the Berklee music college.

2011 brought them their new album titled A Dramatic Turn of Events. The album received mixed reviews but it did not stop the band from receiving a nomination for a very prominent award.

The music video for one of the songs from this album was very successful and the song itself, named  “On the Backs of Angels” received a Grammy nomination.

In the winter of 2013, the band received another Grammy nomination. It was for the song called “The Enemy Inside” which was released on their Dream Theater album.

At the beginning of 2016, the band released a new album called “The Astonishing” and the last album the group released came out in 2019 under the name “Distance over Time”.

John was a very good guitarist and in 2007 he received the “Guitarist of the Year” title which was given to him through the votes of the readers of a magazine named Total Guitar.

In 2011 he received the Guitar Player’s Choice Award and was announced as one of the best metal guitarists from several sources.

As for his personal life he has met his wife Rena in 1989 through their music careers. She is one of the members of a female metal group called Meanstreak.

She was the guitarist in this band and a huge fan of John’s band. They tied their wedding knot in 1993.

John has a very strong and happy marriage with his wife Rena. They have three kids together: Reny, Kiara, and Samantha.

John also likes to train so he can be often found at the gym. He especially trains his arms so he could show his special effects on the guitar.

He has an Instagram account with almost 600 k followers. The most common photos he posts are of his guitars and amplifiers he uses and he has a lot of family photos, especially with his wife.

In 2029 he appeared on the cover of a magazine titled “Guitar Player”. His statement look is a long black beard and long hair.