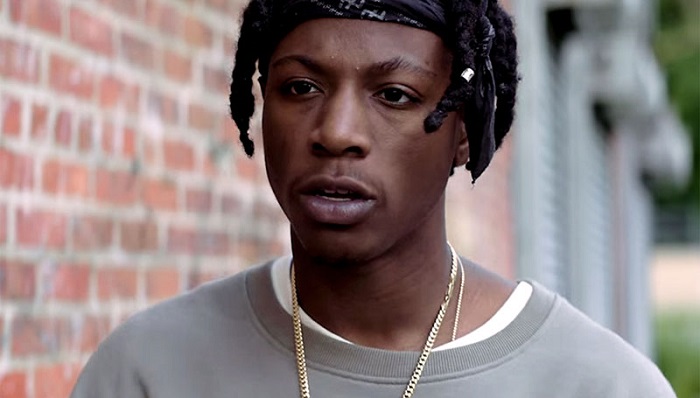 Joey Bada$$ (Badass) is the stage name of Jo-Vaughn Virginie Scott, an American actor and rapper who rose to fame from the underground hip-hop scene thanks to his well-received mixtapes and his huge popularity on YouTube.

Badass has released two studio albums so far. He is also known as the founder of the Pro Era, whose official YouTube channel has more than half a million subscribers and 210 million views.

This article will inform you about Joey Badass’ net worth, personal information, private life and more.

Joey was born as Jo-Vaughn Scott on the 20th of January 1995 in the East Flatbush section of Brooklyn (New York). He is the child of Jamaican immigrants, the first one to be born in the USA. His mother came from the island of St. Lucia in the Caribbean, while his father is from Jamaica.

He started writing songs at the age of 11 and at the age 15 together with his high school friends formed the collective known as Progressive Era, or Pro Era.

Joey first appeared as “JayOhVee”, but later on changed his name to Joey Bada$$, that sounded cooler at the time. He even stylized the name using a dollar bill sign instead of the letter “S”.

The first notable video of Jo freestyling was uploaded in October 2010 on the Pro Era’s official YouTube channel. The video was shared by a popular hip hop site and caught the eye of music big shot Jonny Shipes. Jonny was at the time president of Cinematic Music Group and soon became Joey Badass’ manager. That’s where Joey’s rise to stars began.

His debut solo mixtape “1999” was released in June 2012 and it was instantly titled as the mixtape of the year by HipHopDX.com while “Complex” magazine listed it as the number 38 on the year’s best albums list.

Badass soon released his second mixtape composed of tracks that did not make it on the debut mixtape. The second mixtape titled “Rejex” came out in September 2012, and third “Summer Knights” in July 2013.

Jo debuted as an actor on television in March 2016, in the second season of hit TV series “Mr. Robot”. Joey played the recurring role of Leon, a close friend of Elliot, the lead character played by Rami Malek.

Joey Badass has four siblings, three brothers and a sister, and all of them are his half-siblings from his father’s side. Joey is the only child of his mother. There is no other information about Joey’s family members.

Joey has been going as single since he became famous and had no girlfriend to show, at least not in public. His favorite hobby is skateboarding.

Tours, concerts, albums and appearances are the main source of Joey Badass’ wealth.

He also sells his own branded merchandise. This 22-year-old artist has been in the business for seven years now and has accumulated an estimated net worth of $4 million.

He has no Snapchat yet. And he does not own a self-titled YouTube channel, but publishes under ProEra’s official channel.

Joey Badass grew up listening to hip-hop, R&B, soul and also reggae that where played in his home a lot. Jo’s mother is a big Prince fan. In one interview he remembered listening to The Notorious B.I.G.’s song “Hypnotize” and knowing the lyrics at the age of two or three. Badass’ music is largely influenced by The Notorious B.I.G, Tupac Shakur, Jay Z, Black Thought, MF DOOM, Andre 3000, J Dilla and Nas. He has even been compared to Nas a lot.

Badass was in the top five artists of the MTV Jams list for February 2013, and next month appeared on the cover of XXXL Magazine’s 2013 Freshman Class list.

Joey’s current highest charting single “Devastated” made it to number 25 of the Bubbling Under Hot 100 Singles chart in May 2016.

In 2017 Joey appeared in international add campaigns for Adidas and Calvin Klein and was featured in Forbes Magazine.

Joey Badass’ song “Curry Chicken” is part of the soundtrack for 2015 blockbuster “Creed”, the newest sequel to Rocky Balboa movie franchise with Sylvester Stallone in the lead.

Badass was once arrested and charged for an assault. He allegedly broke a security guard’s nose before a performance in Australia in January 2015.

Joey is in a two year long feud with a fellow rapper Brooklyn native Troy Ave after the former started challenging Joey on Twitter in 2015. The feud has been referred to in several of both artist’s songs and Ave even titled one of them “Badass”.

Jo loves skateboarding and refers to himself as a passionate skater.

As a child Joey was a huge fan of Hot Wheels and generally cars. His favorite ride is a Jeep Grand Cherokee.

Jo-Vaughn Virginie Scott, better known as American rapper and actor Joey Badass, started rapping at the age of 15 and quickly rose to fame from the underground hip-hop scene thanks to his talent and hard work.

He is one of the founders of the hip-hop collective Pro Era, whose official YouTube channel has more than half a million subscribers and 210 million views.

This 22-year-old artist released two studio albums and accumulated an estimated net worth of $4 million.

Joey Bada$$ doesn’t have a girlfriend for now, but focuses on his career and regularly collaborates with big names in the industry.