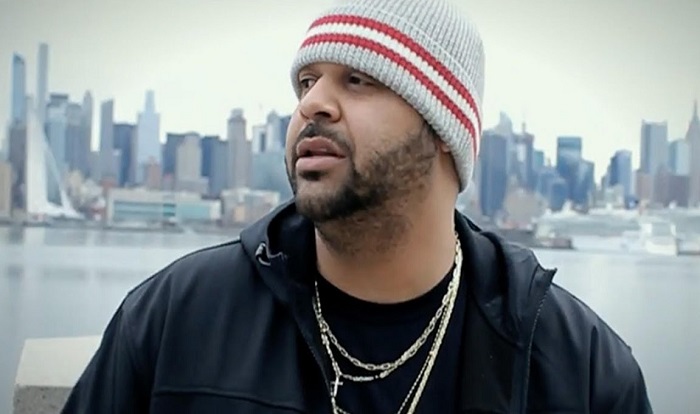 Joell Ortiz was born on July 6th, 1980. Joell grew up in New York, actually in the East Williamsburg section of Brooklyn, in the Cooper Park Houses.

He is also known under the nickname Yaowa.

Joell’s parents are of Puerto Rican origin. His mother name is Michele Ortiz.

He is a rapper from the United States and he is also a member of the group Slaughterhouse, which does not exist anymore.

In the beginning, he was a part of the record label called Aftermath Entertainment, owned by Dr. Dre.

He made appearances in the column called the Unsigned Hype in the issue of the Source Magazine in March 2004.

Joell was also chosen by XXL Magazine as Chairman’s Choice.

He was the winner of the 2004 EA Sports Battle in the same year and for this, he got his song called “Mean Business” and also a spot on the soundtrack of the NBA Live 2005.

He also got an offer to sign a contract with So So Def label by Jermaine Dupri. This deal was terminated in a very short time.

After this, Joell made collaborations with Kool G. Rap and KRS-One.

His debut album is called The Brick: Bodega Chronicles, and it was released in 2007.

Joell also released two more albums, in 2011 he published the album Free Agent, and in 2014 he published House Slippers.

He was going through certain difficulties in his personal life while he was recording this album, and he was also making attempts to sign for a certain label.

Even though he signed a contract with Dr. Dre and his Aftermath Entertainment, Joell was allowed to release his street album with Koch Records.

His first album was The Brick: Bodega Chronicles, published in  2007. He made this project in cooperation with Koch Records.

As producers, on this album appeared many popular names and companies of the music world, such as Street Radio, The Alchemist (an American rapper and producer), Showbiz (an American hip hop duo) and many other.

On April 15th, 2008, the popular rapper terminated his deal with Aftermath Entertainment.

In 2009, Joell Ortiz was very busy. Namely, during this year, he managed to release numerous remixes and freestyles, which end up on the mixtape Road Kill.

One of the songs from this mixtape was “Stressful”, which is the remix of Drake’s song “Successful”.

Halfway House is a digital release of Joe Budden, in which Ortiz participated in the song called “Slaughterhouse”. Beside Joell, there were also Crooked I, Nino Bless and Royce 5’9”, who worked on this song too.

This song was a big success, and because of that, these musicians decided to create some kind of super-group, only without Nino Bless.

The name of this newly formed group was the same as their common song, “Slaughterhouse”.

During 2009, they made quite a few songs. These songs sent a buzz to their fans about their common album.

Eventually, this album was published on August 11th, 2009. It was promoted through Entertainment One, the Canadian entertainment company.

As producers, on this album participated DJ Khalil, Mr. Porter, and Alchemist, and as guest singers appeared The Royales, Pharoahe Monch, and K-Young.

The group left E1 Entertainment and signed a contract with Shady Records in January 2011.

The problems which Ortiz had with E1 Entertainment culminated, and on November 5th, 2010, he left this company.

Even during his contract with E1, he was talking to SRC Records (Steve Rifkind’s record label) about their mutual collaboration. Yet, this contract was never finalized.

In 2010, precisely on October 31st, he gave an interview for Conspiracy Worldwide Radio. In this interview, he spoke of Eminem and their relationship and that the famous rapper was really excited to work with Joell.

He also said that after his album Free Agent was published, he received numerous offers from various record labels which wanted to sign him.

Joell and his companions from the group Slaughterhouse had a tour in 2012. During this tour, one of the stations was Las Vegas, Nevada.

In Las Vegas, Joell and his group were guests in the radio show of Bootleg Kev, and there they spoke about the project on which they had been working, i.e. album called Welcome to Our House. Also, there were some words about their collaboration with Eminem.

In this show, Joell also revealed news about his new contract which he had signed for Shady Records, as a solo musician.

The second album of Joell and his group Slaughterhouse, called “Welcome To Our House, was released on August 28th, 2012.

Joell Ortiz’s third solo album was released on September 16th, 2014. The name of this album was House Slippers.

On this album, many popular musicians appeared as guests, and among them, there were Maino, B. o. B, Joe Budden, Crooked I, and Royce da 5’9”.

In 2017, it was announced, by Joe Budden, that third album of this popular group would never be published.

Joell and members of the group Slaughterhouse officially finished their collaboration in 2018.

During 2018, Joell collaborated with Apollo Brown, and the album Mona Lisa came out of their mutual work.

During his early years, Joell was always accomplished and devoted student. Even when he was a teenager, Ortiz was an excellent rapper.

When he was in high school he was facing a very tough time. Urban environment and family disagreements draw him away from studies and his music career.

He finished on the street and began to deal with drugs.

Luckily, he soon realized that this was not his life, and decided to continue pursuit for his dreams to become a musician.

Because of his natural talent for music, hard work and devotion, he soon managed to get on the right track.

He used the opportunities that were given to him, and all this work began to pay off.

He earned his credibility by appearing in The Source magazine and by winning XXL magazine’s Chairman Choice.

As a result of all this, Joell appeared in NBA Live 2005, by making the soundtrack for this game.

There was one controversy in Joell’s career. Namely, this happened after he released his song “Big Pun Back” in 2011.

The song was criticized by Liza Rios, a widow of late Pun, as well as by Tony Sunshine and Cuban Link, who were members of the former band Terror Squad, which member was Big Pun too.

Those three claimed that Joell in his song did not respect the memory of a deceased member of this group.

Later, Ortiz explained that he wanted to make a tribute to Big Pun, and that is what this song was saying about.

Fat Joe backed Joell up, and in one interview he defended him on this theme.

It is well known that Joell does not speak too much about his family. He has one sister.

He is married and his mother also lives with him and his wife, according to social media.

This talented rapper has bought a dog, when he was visiting Puerto Rico, and gave it a name Verse

He is known among his colleagues as a man with a kind heart. He often puts inspirational posts and tweets on social media, where he is very active.