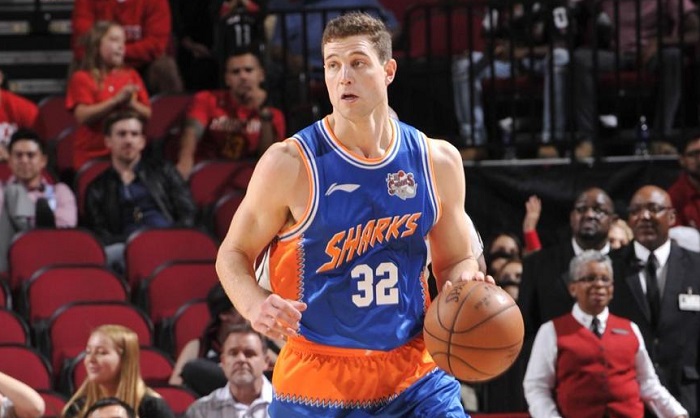 Jimmer Fredette is a very prominent American Basketball player who currently plays for the Phoenix Suns, as a part of the NBA League.

During the peek of his career, there was a huge “Jimmermania” going on amongst his fans.

He was raised in a modest environment, in a small home. “Fredette Bakery”, his father’s earlier business left the family in debt but they kept together and continued proudly.

Because of this, they were always close and this left a huge impact on him and the way he is with his close friends.

He was born as James Taft Fredette on February 25, 1989, in a place named Glen Falls in New York, United States. Little did he know that he was going to have some great opportunities there!

He was raised in a loving home of Kay and Al Fredette alongside his three older siblings. He has gained his first name Jimmer due to his mother’s obsession with unique names. She always wanted her kids to stand out if possible.

He was a very intense athlete from his early years and has shown great dedication to sports and athletics in school. He was never much of a school guy and didn’t want to spend his time doing school stuff. The only thing that was on his priority list was the sport and he was recognized as a good football player.

He was very close to his 7 years older brother TJ who helped him train basketball. His family tried to help him in his career as much as they could. His father took him to road trips to get him an opportunity to train with more intense players.

Kay, his mum, made him a dribbling studio located in their basement because she saw his great basketball obsession.

His mother Kay has a brother Lee Taft who is a personal trainer and she asked him to train with Jimmer from an early age. He still does.

His older sister Lindsay was also his big support. She was Miss Teen in 1998. Jimmer’s mum is a Catholic and their dad is a member of the Church of Jesus Christ of Latter-day Saints.

Jimmer and T.J. played hoops with prisoners of the Mount McGregor Correctional Facility in Wilton.

He went to Glens Falls high school where ehe excelled in basketball and after that, he continued his education and basketball career at BYU (Brigham Young University).

BYU was his choice because it was connected to Marmon church he followed. They had a moto, or to be precise, they call it the BYU honor code: Jimmer didn’t drink, didn’t smoke and didn’t have sex.

In 2009 he set a new record for the school after he scored 49 points in a single game. This was a really big deal for him and he often talked about it. He became a bit braggy because of this, but one could understand.

He continued his great play all during his time in college and even considered to forgo his senior year and enter the draft early but he decided that he would stay at BYU. He scored average 22 points per game in 2009/10 season.

Jimmer became a co-captain of the team. In 2011 he was named as the National Player of the Year by CBSSports.com.

In March 2011 he scored 52 points and broke BYU’s scoring record in a game against New Mexico.

He was named as the National Player of the year in 2011. It was a big difference from his freshman year when he averaged only 7 points per game.

He made him eligible for the 2011 NBA draft.

President Obama spoke highly of his talent and high scores and Jimmer was very proud of it. Another known basketball player named Kevin Durant who has written a tweet  which said: “Jimmer Fredette is the best scorer in the world!!” It was after Jimmer made 43 points in a match against San Diego State.

Long distance shots became his specialty and TV announcers who spoke in other games started calling that kind of shots “Jimmer-like shots”.

His family rooted for him to be drafted to the New York Knicks but they weren’t interested in him.

He was drafted by the Milwaukee Bucks in 2011 but was soon traded to the Sacramento Kings.

He became a huge hit in Sacramento and this phenomenon was named „Jimmermania”.

He was a member of the team until 2014 when the Kings bought out the contract.

That caused him to join the Chicago Bulls where he played during 2013/14 season.

In the summer of 2014 he has joined the New Orleans Pelicans but the very next summer he has joined the San Antonio Spurs. The Spurs soon waived him and he was going to join the 2015 NBA Development League Draft where he was chosen from the Westchester Knicks.

He returned to the New Orleans Pelicans at the end of 2015 because his former teammates suffered many injuries so he had to help out. He was waived only 9 days later.

He returned to Westchester Knicks and was named to the East All-Star Team of D-League.

He became a player for the NY Knicks on a 10-day contract but again returned to Westchester. In the summer of 2016, he decided to join CBA (Chines Basketball Association) and started playing for the Shanghai Sharks.

In Summer 2017 he signed a new contract with the Shanghai Sharks, this time for the period of 2 years. He made his career-high 75 points in a game against Beikong Fly Dragons.

He was also one of the participants in TBT, The Basketball Tournament in 2017.

He made his official return to the NBA by signing a contract with the Phoenix Suns in March 2019. He signed a two-year contract. While he was at the CBA he became the best player in the Chinese League and was nicknamed „The Lonely God“ (Jimo Dashen).

As for his personal life, e got engaged to Whitney Wonnacott (a BYU cheerleader) in 2011 and they were married the next year.

Whitney gave birth to their first child in 2017. Whitney studied broadcast journalism and works on TV.

Their child is a girl named Wesley.

He is very close to his family. His nickname “Jimmer” came from his mum who is a substitute teacher because he was very stubborn and dedicated from his earliest age.

She also named him “Jimmer” because there were a lot of Jims in the family and amongst friends so she wanted to distinguish him from others.

He was only 5 years old and he could shoot 3-point hoops without a problem due to the determination he had in his practice.

His older brother who he loves very much and who helped him learn about basketball as a young kid is named TJ and is an aspiring rapper.

He was so popular in his town that someone made a rap song about him titled “Teach Me How to Jimmer.”

During Jimmer had his sophomore year at BYU, T.J. had serious health problems caused by his brain injury. The injury came as a result of anesthesia during his knee surgery.

Jimmer didn’t know much about it because of T.J. didn’t want Jimmer to know how he struggles with his illness.

He went through months of rehab and made big progress so today he can help Jimmer live his hoop dream, and at the same time, he tried to make his music career.