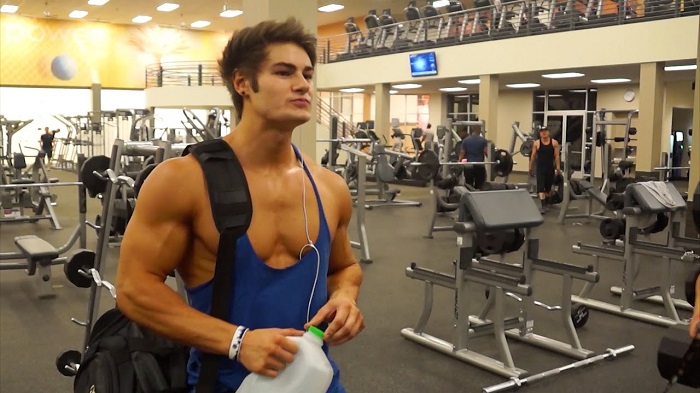 Jeff Seid is a bodybuilder, a fitness icon and a social media star living in America.

He is known to be the youngest professional builder ever in the International Federation of Bodybuilding and Fitness.

At the age of five he started showing interest in all kind of sport activities. It was his way of steaming out and spending his extra energy. He was always a super athletic kid and this brought him to his eleventh year when he started lifting weights.

When he speaks about his years in the elementary school he calls himself a nerd. He was always reading fantasy books and playing World of Warcraft and wouldn’t go out with his friends.

He had a lot of acne on his face so he was a little insecure about it.

He was involved in a lot of activities during school: football, baseball, wrestling and track running.

After seeing the famous movie called Conan the Barbarian he was amazed by a famous body builder Arnold Schwartzenegger and decided he wanna be just like him.

In his last year of  high school he opened up negotiations with a lot of schools for a potential scholarship in football.

He was an awesome football player and a great wrestler so he knew he would get it easily (since he was ranked as one of the best wrestlers in the country at that time and already had many records broken).

He was an All-American wrestler in his high school.

That year, at the very first football game, he tore his Anterior Cruciate Ligament and he began to worry will he ever be able to return to sports.

His plans for the future included sports scholarship so he was afraid he will lose it. After he broke his ACL for the second time, after just a few months, he was sure his career was over.

That caused him to fall in depression and lose faith that he could get back on the track and finish what he planned.

He discovered the world of weight lifters after quiting his football career and found a way to be an athlete.

That is the time when he started turning to bodybuilding and he became the youngest IFBB professional in history.

He is a really good businessman: he earns his money not only by going on body builder competitions and events, but he started an ISSA certified personal training online.

He started to train celebs and opened his own channel, a streaming channel with videos, diets and other advice that help everyone who wants to start lifting weights or do some serious fitness.

He also started a clothing line, so he sells clothes for bodybuilder online. The website is named SeidWear Fitness Apparel.

He is an author of a book called Guide to Aesthetics, which has over 160 pages and speaks about the changes people must embrace to become stronger and live healthier.

There aren’t many informations abou Jeff and his love life. He often posts pictures of him and some girls but he never comments whether is any of them his girlfriend.

He has two sisters and he is very close to them and to his supportive parents.

For his bodybuilding career he was mostly impressed and inspired by Arnold Schwartzenegger.

His current address is in Seattle.

He asked his parents for his 12th birthday to get him a weight set as a gift.

When he started training he got himself a big poster of Arnold Schwartzenegger on his room wall, to make him more confident and to be sure he will not give up.

Jeff Seid is a very popular American body builder and a YouTuber.

He managed to become a millionaire only by his hard work and good business skills.

Since 2012 Jeff became an owner of 10 titles, all of which he got taking first places.