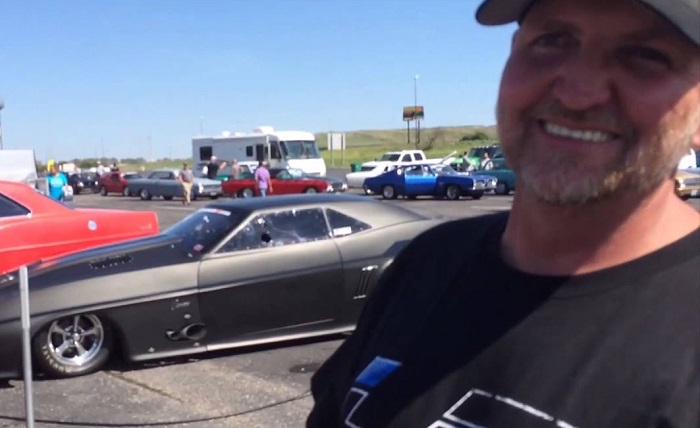 Exciting TV shows are still the big thing, the only difference from the previous phase in the media (the early 2000s) world is the fact that the majority of reality shows moved to the YouTube and generally online, everything else stayed the same.

We still want to see drama, passion and exciting characters doing something that we do not want to or we are scared to do it.

One more difference may be the fact that some other faces replaced old ones, but the shows stayed the same.

And in this sense, we must speak about Jeff Lutz, an American Street racer and a part of a reality TV show called “Street Outlaws.”

He is one very interesting character that captivated audiences for a long time, and he made some money along the way.

This is the show that has great ratings and his son Jeff Jr replaced his dad in the show – or to be more specific, and they work together on modeling cars and racing.

Jeffrey Lutz was born on May 15, 1970 – he has one brother whom he is very close. He has graduated from high school, and there are none other recordings of his other education.

Other information about his family is unavailable.

Jeff’s interest in cars started when he was a teenager – this love was born after Jeff’s brother came back from Marines and bought a new Camaro.

Jeff fall in love with cars instantly, and he soon develops a passion for racing and cars in general.

He stated that this was the four-speed car and that he was hooked – it was like a ball to the wall. It never stopped.

One interesting thing is connected to his early years – Jeff drove without a license, he was caught. Then he lost a chance to have a real license for some period, but this did not stop him from wanting to be the part of this world.

Jeff eventually got his license, and he bought himself a new car – a 74′ Nova hatchback.

Jeff primarily started working in construction, but this was not the job for him, regarding money, so he decided to open a hot rod shop.

He was a bricklayer and even had a team of people working for him, but this kind of jobs, in the sense of the market, collapsed, and he felt that time is for a change.

Jeff soon started to be involved in car races – he is the owner of “Lutz Race Cars” which is settled in a town in Pennsylvania called Callery. This is still something that gives him income, and in this sense, this remains his base.

Drag week is a tough competition because it has to be done in 5 days and the cars go over 1000 miles without help from the outside.

Of course, they have their machine tools and all the spare parts that fit in their vehicle – since the race is so hard, racers have everything they could ever need to endure it.

At one of the first Drag Week races Jeff met Shawn Ellington and Justin Shearer -this was a connection that will last.  Shawn and Justin sought Jeff to help build rides for their Discovery Channel show “Street Outlaws”.

Drag week is really hard, and the contestants have trouble staying awake – many of them are doing everything in their power they can just to make it alive. Jeff is known for his love of sandwiches and Diet Pepsi, but in the meantime, he likes to eat lots of Twix bars -for his much needed sugar rush so that he can endure the pressure.

All of this is a great part of his career, but Jeff is best known for his role in a TV show “Street Outlaws” which runs on Discovery Channel.

This is a documentary-style reality show that gives an insight into street racing, and illegal racing – this show gains a lot of interest, but also a lot of controversies.

Of course, this kind of show is not immune to its share of controversies due to the nature of street racing and illegal racing in the USA.

In this show you get the see all the drama and competition, especially with another cast member – Big Chief. This aspect was just added for tension, and these two are great friends.

Jeff raced in the third National Bowling Green Competition in Kentucky -on this occasion he displayed the new car that he made with his son.  They built a 1957 Chevy Bell Air with twin 98mm Precision Turbos and 540 cubic inch motor.

In 2017, he made it in 5.89 seconds and won the title of “King of Drag Racing”. This is one name that every person who wants to be in car races wants to have, and Jeff succeeded in this venture.

Jeff has a wife and a son Jeffry Jr and daughter Charise – he is married to Christine Lutz, they married on July 31, 1989.

He does not mention his daughter very much, but since his son is in the same business as his dad, he has a big space in media.

These two share a son, Jeffry Lutz Jr from their marriage of over two and a half decades. Jeffry Lutz Jr. is following his father footsteps, and many say that he is doing the right job, and his daddy is proud of his son, being very sensitive when he is looking at him while racing.

Jeff once said that he genuinely gets emotional watching his son race – it is like watching myself in videos driving the car, it was really cool. I am very proud.

From his social media posts, you can see how much Jeff is connected to his family, and he often shares pictures with his family, especially his wife.

Jeff Lutz has one more important person in his life: Scott Murray, his co-pilot and a beloved friend. He and Scott come every year to the drag week competition, and they help each other.

Nowadays, Jeff drives a customized 1969 Chevrolet Camaro aka Mad Max and he has ’57 Chevy which he built in his shop, “Lutz Race Cars”. He doesn’t have only this car but he has two more, and they are both 1957 Chevrolet Bel Air cars.

The company is doing great, and he has a lot of work to do, a lot more than he would usually have because he’s very popular amongst racers and he always has some car in the shop to fix or modify. There will always be people who adore cars and who will spear no money to make their “pets” looking beautiful and powerful.

He is the owner of streetcars modification shop, called “Lutz Race Cars” in Callery, Pennsylvania. In it, some cars won races.

He has a quite large income from his shop and from Street Outlaws, so his net worth is estimated at around 1.5 million dollars, and maybe even closer to 2 million dollars.

Jeff has a very large fan base, and they follow him on his social media accounts – this may be one more way of enhancing his bank account.

“Lutz Race Cars” often post on Facebook and Instagram page -they are promoting upcoming events – more and more public are drawn to this type of events, and Jeff is one figure that always gains a lot of interest in the racing world.