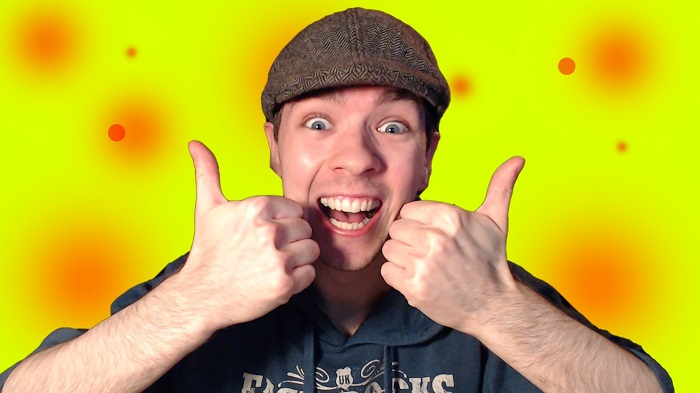 Seán William McLoughlin, known as Jacksepticeye, or Jack, is an Irish YouTube personality and a video game commentator who’s channel with its 15.3 million subscribers takes the 30th place on YouTube’s most-subscribed channels list. Jacksepticeye is famous for his comedic and energetic performance in Let’s Play videos.

Jacksepticeye’s followers are numbered by millions on social networks as well, and he has branded his channel with a recognizable mascot of a green eye called Septiceye Sam.

In this article you can find all the information about Seán William McLoughlin or Jacksepticeye. We have already told you Jacks real name. Read on for his relationship info, net worth, social networks presence and other must know facts about Jacksepticeye.

Jacksepticeye was born in Athlone, Ireland, on the 7th of February 1990, and spent his childhood in the countryside with four older siblings taking care of him as the youngest child in the house.

There is a crazy but try story behind Jacks unusual nickname “Jack septic eye”. As a child mother called him Jack, which was a common nickname for Seán where he grew up. The other part of the nickname came from a wound Seán got while playing football. He actually cut his eye on glass from friend’s glasses and the eye became infected, hence the nickname.

When he grew up, Jack pursued an interesting and creative career, as he started studying music technology in college. Unfortunately he quit college half way through, only to return to graduate in a different field of study, some would argue a more uninteresting field. Believe it or not Jackseptickeye is a graduated hotel management. Though he doesn’t manage a hotel he definitely uses his manager skills to brand and promote his work on YouTube.

Jacksepticeye joined YouTube in 2007. but didn’t start posting his videos till 2012. He became popular after being mentioned in a video made by the number one most popular game commentator PewDiePie, who is now a good friend of Jacks.

Jackseptickeye makes videos in series and publishes a new video every three to five day. Jack says he enjoys the adventure genre the most, and likes playing Shadow of the Colossus.

Seán William McLoughlin is the fifth child in his family, sharing play and toys with two sisters and two brothers. In his vlogs Jack mentioned one of the siblings, a sister named Allison. We also know that his brother Malcolm McLoughlin is a writer. Until now there has been no info about the other siblings.

Jacksepticeye has a girlfriend. Though he rarely mentions her in his videos, they are currently living together. Jacksepticeye’s girlfriend is also a YouTuber known as Wiishu. Her real name is Signe Hansen and she’s from Denmark.

Jacksepticeye’s YouTube channel earned him $9 million in revenue. He earns on average $300,000 per month.

You can find Jacksepticeye on popular social networks, where he has millions of followers (4.6 million on Instagram and 2.8 million on Twitter). Jack posts the most on Twitter, and his twitts display his sense of humor.

Before fame and YouTube Seán William McLoughlin was for a while a drummer in a band called “Raised to the Ground”, playing indie metal rock.

Jackseptickeye has a unique and recognizable style: he starts all of his videos with the same sentence, wishing a good morning in his own funny way, calling viewers “Ladies”, and speaking in a loud energetic voice. He also ends videos in the same way, reminding viewers in a conspicuous but lovable way to like the video. You can even hear Jack speak Irish in his videos sometimes, giving a few words or so.

Jack’s fans often make cartoons, animations, sometimes compose music for him and in other ways make tribute to his work and personality. Even several games have been made for Jackeseptickeye, and also some levels in other games that Jack has played. Jackseptickeye gladly shares it all on social networks.

Jackeseptickeye claims he spends a lot of time reading fan comments on his videos, and tries hard to regularly interact with them, so if you leave an interesting comment you might get an answer from the man himself.

Jack’s Channel has a mascot called Septic Sam. It’s a huge green eye with blue iris. Septic Sam is depicted on t-shirts and other merchandise, and even sold as a plush toy.

Local newspaper Westmeath Independent only recently recognized Jackseptickeye as the most famous person in the neighborhood. They did a big interview with Jack at the beginning of 2017. where he talked about the common misconceptions about his profession, and game commenting as being an easy effortless work. Jack pointed out that at the beginning he worked alone, sometimes for 12 hours a day never to miss a deadline.

In the interview for Westmeath Independent Jack said he is planning on moving to Brighton, England, where he wants to start working with a voice coach.

Jackeseptickeye has a sweet tooth for cookies and cake. He’s also a fan of ice-cream.

Jacksepticeye, born as Seán William McLoughlin, is a video game commentator from Ireland, whose YouTube channel is the 30th most-subscribed on the platform. Jacksepticeye is famous for his comedic and energetic performance in Let’s Play videos, and his friendly personality.

Jacksepticeye’s pages on social networks have millions of followers Jack regularly interacts with. He has a girlfriend and many close friends amongst other gamers and game commentator.

Jacksepticeye Channell also has a mascot and sells merchandise that helped Seán William McLoughlin earn on average $300,000 a month.