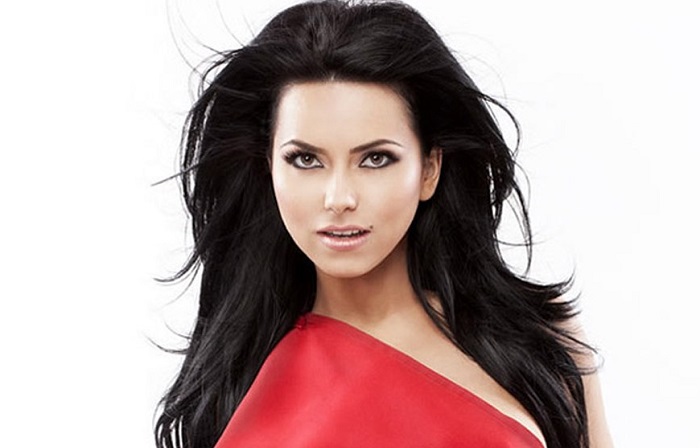 Inna is the stage name of a beautiful Romanian singer, songwriter and a great dancer.

She is very popular in Europe and has become a world-known for her 2011 song named “Sun is Up”. She sings in Romanian, English, and Spanish and loves to be versatile.

She was born as Elena Alexandra Apostoleanu on October 16, 1986, in a port-city called Neptun, near the Black Sea in the country of Romania.

She spent her happy childhood as a very loved child of Maria and Giorgio Apostoleanu.

Elena inherited her mother’s and granny’s musical talent since they both know how to sing.

Her mother was not only a singer but she was also a dancer.

Elena was always surrounded by music so it influenced her from her early days. She loved to dance and always had more energy than her friends.

Her father worked in a very responsible workplace of the sea rescuer. It was a reason for Elena to start training swimming but she was also interested in many other sports mostly basketball and even football. At the same time, her interest in music grew higher.

She liked all types of music but she was especially into pop and electro house because they are so energetic.

She is a huge fan of Christina Aguilera, Beyonce and the late diva Whitney Houston.

Elena grew up in the town of Neptun where she finished her elementary education. Her choice of education was Mangalia’s Economy College but she later transferred to the Ovidius University of Constanta.

At the same time, she began taking singing lessons and her interest in music grew to was very persistent in trying to make her way into the world of Romanian music.

She went on an audition for the A.S.I.A. band but it was unsuccessful. It didn’t make her feel bad although she had great hopes for it.

Inna started working in a store in Neptun but was heard by her boss who insisted that she records a few songs with a production team Play & Win because he believed that she could have a successful musical career.

In 2008 she named herself Alessandra and she auditioned for the Eurovision 2008 but she wasn’t selected as the possible country representative on that event.

Later, when she became a star, they asked her to be a Romanian representative for Eurovision but she rejected it because of her busy schedule.

Her first TV appearance was in a TV show, Teo! where she sang her song “Goodbye”.

Not bothered with her failure into entering the Eurosong contest she changed her name into Inna.

It was her favorite nickname which was given to her by her grandfather. She thought that it was easy to remember and she was emotionally connected to it.

Inna first started releasing pop-rock songs by the name of Alessandra but after she changed her stage to Inna because she decided it was a mark for changing her music genre into house music which was commercially more interesting at that time.

She was a huge fan of Black Eyed Pease and Swedish House Mafia and she knew most of the songs by heart.

In 2008 she has released a single which became a huge hit in her country.

This debut song “Hot” was the lead single of her first studio album which came out the next year holding the same name.

This track turned out to be a hit all over Europe and it brought her many nightclub bookings.

That brought her not only financial benefits but also spread the word about her and her talent.

Her second single came in 2009 under the name “Love” and it entered Romanian charts in the top 5. Her song was nominated for the 2009 EMA Awards which ran in Poland.

In 2009, the Romanian label to which she was signed started collaborating with the US label Ultra Records so it opened her the possibility to become known across the ocean.

In 2009 she collaborated with Bogdan Croitorce on her 3rd single named “Deja Vu”. This single was just as noticed as the earlier ones.

Her fourth single was a huge hit which came out in 2009 and was named “Amazing”. In the summer of 2009, her debut album titled “Hot” came out and became very popular in Romania. It was certified gold in her home country and in France it went to Platinum.

Both in 2009 and 2010 MTV’s Europe Music Awards she had gained the awards for Best Romanian Act. She was the first artist in Romania to manage it.

In the fall of 2010, she released her lead single for a new studio album which was released in 2011.

The name of the single is “Sun Is Up” and it was the announcement for her studio album called “I Am the Club Rocker”.

This single “Sun is Up” has received the Eurodanceweb award the same year of the release which was a huge thing for Inna because it was the first time any Romanian won this award.

Her album “I am the Club Rocker” was released in 2011 by Roton and was a huge hit in Mexico, Czech Republic, and Poland.

She went on a tour titled “I Am the Club Rocker Tour” from Europe to the US and Mexico. By the end of 2011, Inna became one of the highest-paid European artists.

In 2012, after turning down the offer to be Romanian representative on Eurosong Inna released a single “Caliente” which she made for her fans in Mexico and was dedicated to them.

She had several hits the same year, from “India” to “Tu si eu”. Some of the songs were made in English and some are in Romanian.

Her 3rd studio album was released in spring 2013 and it was named “Party Never Ends”. The album spunk two big collaborative hits: “More than Friends” made with Daddy Yankee and “In Your Eyes” features by Yandel.

Her album received nominees for Romania Music Award in the category for Best Album both in 2013 and 2014.

A Moldavian musical band called “Carla’s Dreams” launched a single titled “P.O.H.U.I.” in the spring of 2013 and she guest appeared on this single.

She was featured on the song “All The Things” released by Pitbull. Pitbull is a very popular American artist so their collaboration helped Inna enter the American market.

In 2014 she collaborated with J Balvin on a song called “Cola song” which was a huge hit in Europe. It was even certified Platinum in Spain.

This song was used for the promotion of the FIFA World Cup 2014. “Good Time” is her single from 2014 with Pitbull guest appearing on it.

Her fourth album came out in 2015 and was titled “Body and the Sun”. “Diggy Down” is her biggest hit from this album and it came to No.1. On Romanian charts.

This song has received the Best Dance Award. The other two hits were “Bop Bop” and “Rendez Vous”.

In 2015 Inna again received an MTV award for Best Romanian Act. She collaborated with Carla’s Dreams one more on their hit song “Te Rof”.

She opened the Untold Festival in Romania in the summer of 2016. Inna joined a supergroup named “G Girls” but has released only two singles with them.

In 2016 she became a coach on Romanian Voice Junior Show. It was a great experience for her since she loves kids and she was thrilled to see how many children with talent are in her country.

Her 5th album came out in 2017 and was titled “Nirvana”. It was released by Global Records and in partnership with the LIDL supermarket.

Inna worked with several producers like  Sebastian Barac and Vlad Lucan so every track has a different signature.

Her 6th album came out in spring 2019 and is special because it was completely made in the Spanish language. The album is titled “Yo” and released by Roc Nation.

The album was praised for its creativity and the fact that Inna was heavily involved in its making. She visited Mexico and the USA where she promoted the album and it’s single “Ra”.

She is known for her great philanthropic work which includes a campaign against domestic violence, fighting for children’s rights in her country and starting hef own campaign called “Bring the Sun into My Life”. She supports the LGBT community.

She has almost 3 million followers on her Instagram channel.

From 2003 until 2014 she was in a relationship with her manager Lucian Stefan.

After the break up she started dating John Perez, an American photographer but nobody knows are they still together.

Some even speak that she started dating Lucian Stefan again. The reason behind these rumors is in the fact that Lucian promotes Inna a lot on his Instagram account which has over twenty thousand followers.

She lives with her mother and granny in Bucharest, in a grand villa she bought herself.

She doesn’t have any siblings so she is closest to her mother. She loves her granny and respects her very much.