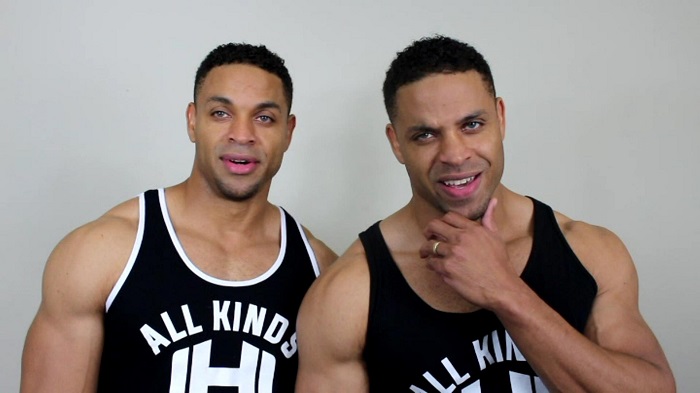 They were born on September 17, 1975 in Martinsville in Virginia.They are the youngest in the family since they have hey an older sister and an older brother.

They were raised in Virginia in very hard conditions and living in poverty. They often shoplifted food because they didn’t have anything to eat at home. That kind of childhood made them stubborn and ambitious for success.

After a while, their situation improved and these two ambitious twins ended up in college. They both graduated  and got degrees in Accounting and Finance from the American InterContinental University.

After finishing college Keith and Kevin Hodge worked in many different industries. They’ve been in the Marine Corps and after that they got a job of  security guards. They also worked for an insurance company but they were never quite pleased with their jobs. They aimed for more, for a chance to work somewhere where they could help people more and make a difference.

Their first video was uploaded on their YouTube channel called TheHodgetwins in 2008.

The video was a comedy sketch and eventually the channel turned into a comedy channel. They often gave commentaries on current events in the country and tried to follow the interests of the masses.

Later, when they became more known and attractive, they started giving advice in many areas, from relationship advices to family agendas.

After they discovered the big influence of YouTube on people, they decided to start a new channel. This time, the channel waa oriented on their personal fitness and it became their most popular channel. Today it has almost 2 million subscribers.

Once they have secured their status as known YouTubers they started to do stand-up comedy and acting. They have travelled all around the world doing their comedy tours. They mostly use informations from their private lives, their past and poverty in their dialogues.

The twins are unseparable and although they work together they also live in houses next to each other.

They are both family men and are in longlasting happy marriages.

Keith is married to his wife Elizabeth since the spring 2000 and they have three beautiful children togrther.

Kevin married his wife the same year and is the proud father of four children.

Due to their fitness routine and healthy living, their children are happy to be a part of such a healthy lifestyle which includes good nutrition and exercise.

They spend a lot of time with their children, trying to make their childhood way better than theirs was.

They are pursuing careers in TV and film area. In 2014 Kevin appeared as himself in the movie “The Last of the Great Romantics”.

Hodgetwins LLC is their own official website where people can buy their supplement products, T-shirts, tops and even wristbands with their catchphrases.

Hobbies: traveling, picnicks with the family

Both Kevin and Keith have the certification of ISSA (International Sports Sciences  Association) as personal trainers.

They are not ashamed of their crane for junk food so they even post what kind of food they eat on their cheat days: pizza, barbecue ribs and biscuits.

Kevin is condidered to be more relaxed and Keith is thought to be the serious brother.

Kevin was a guest on “Morning Express” with Robin Meade.

Their most popular video has been seen over two million times and it is called “Hodgetwins You Are Not Black @hodgetwins”.

Many black men publicaly racially harassed the HodgeTwins because  they thought they weren’t black enough but mixed, so the twins made a DNA Ancestry test which showed that they are 58% black and 42% white.

The Hodgetwins is a mutual name for twin brothers Kevin and Keith who are known American comedians, YouTubers and fitness trainers. They are very popular and have their own brand and products in sales.