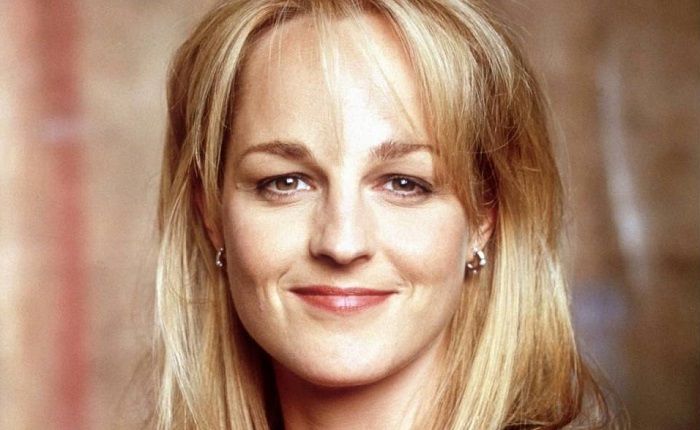 Helen Hunt is American actress, screenwriter and director. Her career begin with TV series Mad About You, and in 1997, she appeared in romantic comedy As Good as It Gets, as Carol Connelly, single mom. For this role Helen was winner of the Academy Award for Best Actress.

Helen was born at June 15, 1963, at Culver City, California. Her full name is Helen Elizabeth Hunt. Her parents are Jane Elizabeth Novis and Gordon Hunt. Mother was photographer, and father was acting coach and stage, film and voice director. Peter H. Hunt is also director and he is her uncle.

All her grandparents are English natives with Methodist  religious views, except her grandmother which is German-Jewish.

In her third year, whole family moved to New York. Her father got job as theatre director. As a child, Helen played in theatre several times in week.

Helen’s beginning in acting was in 1970s, when she still was child. Her first appearance was in 1973 in the movie Pioneer Woman. She also appeared in episode of The Bionic Woman, and in episode of Ark II. In 1975, she had main role in TV series The Swiss Family Robinson. In 1980, she appeared in one episode called “Dope” in The Facts of Life. In 1982, she got role of Sandy Cameron in movie Desperate Lives.

Helen was also part of casting crew for TV series It Takes Two. This series lasted just one season. In 1983, Helen played in movie Bill: Pm His Own, and in the same year she got main role in movie called Quarterback Princess.

In 1985, Helen appeared in movie Girls Just Want to Have Fun, next to Shannen Doherty and Sarah Jessica Parker. Later, there are movies like Project X in 1987, Stealing Home in 1988, Next of Kin in 1989.

In 1991, Helen had main female role in My Life and Times, which are short-lived series of 6 episodes. After that she got main role in TV series Mad About You. This series lasted from 1992 to 1999. Nuber of filmed episodes is 162. From 1996 to 1999, Helen won Emmy Award for her performance in all four years. In the last year of series Paul Reiser and Helen Hunt became first actors in history which was paid per episode $1,000,000. In couple of episodes Helen was appeared like director.

First movie directed by Helen was Then She Found Me. She also acted in this movie. Twister was disaster movie in which Helen starred in 1996.

In 1997, Helen starred in movie As Good as It Gets as single mother and waitress who falls in love with romance novelist. For this role she won Academy Award for Best Actress. After that she played at Lincoln Center for the Performing Arts in Twelfh Night, comedy of William Shakespeare.

Beginning of next decade was very busy. Helen appeared in four movies: Dr. T & the Woman, Pay it Forward, What Woman Want, Cast Away. In 2006, Helen starred in movie Bobby. In 2011, she appeared in Soul Surfer.

In 2012, Helen starred in The Sessions, which was successful movie with good reviews. This movie gained couple nominations for award, as well as Oscar nomination. On Sundance Film Festival this movie earned two awards.

In 1994 Helen started to dating with Hank Azaria. He is an actor. This couple married after 5 years of relationship, in 1999. Their marriage lasted less than relationship and they divorced after 17 months. After that she never married again. Until recently Helen had partner Matthew Carnahan. They started their relation in 2001. They became parents on May 13, 2004, when their daughter came to this world. Her name is Makena Lei Gordon Carnahan.

Just couple months ago, in August this year, they ended her relation 16 years after.

Her incomes are from acting, screenwriting and directing. Also, she is owner of one production company in under Sony Pictures Entertainment.

Helen Hunt is famous as actress and director. She is also popular on social networks.

She have official page on Facebook with more than 800.000 likes.

Posts, pictures and videos shared by Helen herself can be seen on following links:

When you start searching internet you can find interesting facts about Helen.

She was on University of California for just one month. In 1999 she became most paid actress per episode ever. She earned $1.000.000 for each episode. After Liza Minnelli in 1973, Helen was second actress which was winner of Golden Globe, Emmy and Oscar in one year. 2000 year was really successful. In that year was published four movies. Two of them was released in same time, and each of them earned more than $150 million.

Meaning of Helen’s daughter’s name is “many flowers of heaven”.

Helen Elizabeth Hunt was born in Culver City, California, on June 15, 1963, as child of Jane Elizabeth Novis and Gordon Hunt. When she was three years old, whole family moved to New York. Gordon was directed theatre, so Helen started to play as a child. She was shortly on University of California and he studied ballet.

Her first movie that she directed was Then She Found Me. She also acted in this movie. She had one movie that was disaster. It’s word about Twister in 1996. For role in As Good as It Gets she was winner of Academy Award for Best Actress.

She had marriage which lasted 17 months with Hank Azaria. From 2001 she dated with Matthew Carmahan. With him Helen have daughter, Makena Lei Gordon.