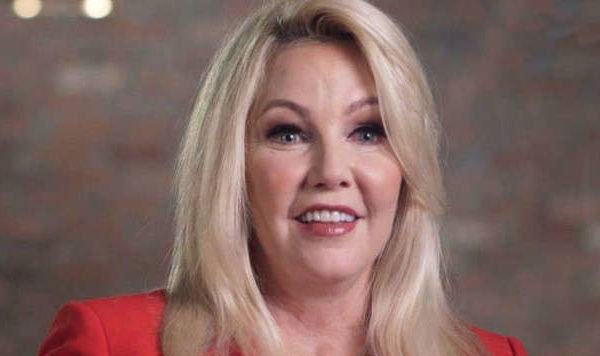 Heather Locklear is an actress from the United States. She became known to the public with her role as Amanda Woodward in a TV series Melrose Place.

For this role, she was nominated four times for a Golden Globe award in the category „Best Actress – Television Series Drama“.

She also played Sammy Jo Carrington in a famous show Dynasty that started airing back in 1981. She was one of the favorite actors in it.

Some of her other roles include Stacy Sheridan from T.J. Hooker, Caitlin Moore from Spin City, and also ones she had on Hot in Cleveland and Franklin & Bash.

Some of the movies she was in were Firestarter, a Sci-fi thriller from 1984, Money Talks, an action-comedy from 1997, The Perfect Man from 2005 and so on.

Heather was born on September 25th in 1961 in Los Angeles, California in the United States.

Her mother is Diane Locklear, a production executive, and her father is Bill Locklear who is an administrator and was also a Colonel in the marines in the past.

Heather went to the University of California, Los Angeles (shorter UCLA) and there she pledged for Delta Delta Delta and Chi Omega but was never initiated into any sororities.

At that time she started modeling in commercials for the school store. At the beginning of the 80’s she appeared first time on the screen with roles in some of the episodes of CHiPs, Eight is Enough and 240-Robert.

That was before she met Aaron Spelling, a TV producer who is today considered as one of the greatest ever.

He casted her as Sammy Jo Dean in the second season of a soap opera Dynasty that was airing on ABC. He recognized her talent and grace and knew she was the best for this role.

A year later Aaron also hired her to act in a cop show called T.J. Hooker.

For a long time, she was a regular on T. J. Hooker and had a lot of appearances on Dynasty.

T.J. Hooker was canceled in 1986 and she became a full-time cast member of Dynasty until 1989 and it’s a cancellation.

In 1991 she was in a four-hour miniseries called Dynasty: The Reunion where all of the cast members came back.

After this, she got a role in a movie called The Return of Swamp Thing where she played the character of Abby Arcane, a DC comic book hero. For this role, she got the Razzie Award in the category „Worst Actress“.

She was also in ABC’s sitcom Going Places but this show was canceled after only a year.

In 1993 she became playing the character of Amanda Woodward in Spelling’s drama TV show called Melrose Place. This show was a spin-off of Beverly Hills, 90210.

Originally she was cast for only a few episodes but stayed as a full-time cast member although she was getting called a „special guest star“. This show was canceled in 1999.

For her acting, she got the First Americans in the Arts award for Best Actress in a Television series.

She also won the TV Land Award for it in the category „Favorite Teen Dream – Female“.

Aaron Spelling and Heather had a long and successful collaboration and she was in his TV shows like Dynasty, T.J. Hooker, The Love Boat, Matt Houston, Melrose Place, Fantasy Island and many more.

In 1994 she was a guest host on Saturday Night Live. Some of the skits she was on were Cofee Talk with Mike Myers where she played an older Jewish woman and Wayne’s World.

In 1993 she also made a cameo appearance on Wayne’s World 2.

Back in 1996, she was the main guest on Muppets Tonight, where she performed spoof of Melrose Place called Muppet Heights.

In 2004 she was in an E! True Hollywood Story’s and also on a Lifetime special titled Intimate Portrait in 1997.

In May of 1994, she was on a cover of Rolling Stone magazine because of the popularity of Melrose Place at that time.

In 1999 she was cast in a sitcom called Spin City and she did it with Michael J. Fox and after that with Charlie Sheen.

She was nominated twice for a Golden Glove Award for this show in the category „Best Actress in a Television Series – Comedy“.

In 2002 she had a small role in Scrubs, a comedy-drama TV series.

In 2003 she was in a pilot episode of Once Around the Park, her show, but it was unsuccessful.

That year she was in a comedy-drama movie Uptown Girls.

In 2004 she had an appearance in Two and a Half Men, with her former co-star Charlie Sheen.

From 2004 to 2005 she was in a TV drama series LAX. She was also an executive producer of the series but it was canceled after only 11 episodes.

In 2005 she was in a romantic comedy „The Perfect Man“ alongside Hillary Duff.

That year she also appeared on Boston Legal, with William Shatner whom she worked with on T.J. Hooker.

In 2006 she was in a TV pilot Women of a Certain Age but this was not a success.

Heather was in a music video for a country singer Toby Keith and his song Crash Here Tonight in 2006.

In 2006 she had also entered the People Magazines’ Most Beautiful People in the World list.

In 2007 she made another pilot for ABC network, this time See Jayne Run. This again wasn’t a success.

She was a guest star in Hannah Montana and also in the sitcom Rules of Engagement.

In 2009 she became a part of the cast of a new adaptation of Melrose place with the same name but made by the CW. It follows the same characters but years after.

That year she was in eight episodes of the show with her role as Amanda Woodward. Her character is now in a public relations firm and is a mentor of a character played by another interesting actress Katie Cassidy. Although the old stars were featured on the show it wasn’t a success and was canceled after just one season.

In 2011 Heather was in He Loves Me, which was a TV movie aired on Lifetime Channel.

In 2012 she made appearances in a comedy series Hot in Cleveland as Chloe Powell, Alec’s ex-wife.

She also became the regular cast member of Franklin & Bash in 2013. She plays the role of a lawyer, Rachel Rose King in it.

In 2014 she was in a public service announcement after the death of Sarah Jones, an assistant, on the set of Midnight Rider.

She appeared in the movie The Game of Love in 2016.

In 2017 she was in eight episodes of Too Close to Home and was also a guest star on Fresh Off the Boat.

She dated Tom Cruise for several months in 1982.

In 1983 she was seen with another American actor Steve Baio but their relationship was very brief.

She dated Christopher Atkins for over a year but they never wanted to confirm their relationship.

She started dating Mark Harmon in 1984 but they split after a month.

As for her marriage, she was married to Tommy Lee, a drummer of a very successful rock band  Motley Crue. It was Tommy Lee’s second marriage. She was 24 at the time of the wedding and was dating Tommy for just a few months.

The wedding took place in Santa Barbara in front of 500 guests. After they got married they went on their honeymoon which took place on the Cayman Islands.

They married in May of 1986 but divorced in 1993 after Heather found out that Tommy was not faithful to her while being on tours with his band.

After the divorce, she married Richie Sambora, a guitarist of a band Bon Jovi. She did it in a very short time and although many told her that it would end up the same because he is a musician too, it did not. They were together for 12 years.

In 1997 she gave birth to her only child, a daughter named Ava Elizabeth Sambora.

Between marriages with Sambora and Wagner, Heather dated a comedian David Spade for several months.

The same year she started a relationship with a Melrose Place star Jack Wagner.

In 2011 Heather stated that she and Wagner are engaged. They called off their engagement the same year.

Her next relationship was with Dr. Marc Mani and it started in 2013. It lasted for three years until this plastic surgeon ended it after seeing some of her photographs with her ex-husband Tommy Lee.

She also has a serious past of alcohol abuse and it seems that she is still struggling with it.

Her latest relationship was with Chris Hossier but it seems that she broke up with him after finishing rehab. Chris was her high school sweetheart and he entered her life in 2015.

She was in rehab numerous times, sometimes willingly sometimes not.

In 2008 a call was being made by a person that was allegedly Heather’s doctor that told the emergency responder that Heather tried to commit suicide.

The emergency responders came to her home but Heather’s publicist stated that there wasn’t any medical assistance needed because she seemed to be fine.

In Juen that year she went into a medical facility in Arizona because of her anxiety and depression. After four weeks of treatment, she was returned home.

In September that year, she was pulled over by the police because of driving under influence. She was charged for it, although he didn’t have any alcohol or narcotics in the blood. The authorities believed that it was because of her medications.

In 2009 the charges were dropped but she got three years of probation and a $700 fine.

At the beginning of 2012, her sister called 9-1-1 because she thought Heather could be in danger because she allegedly took her pills and alcohol. Heather was taken to the Los Robles hospital in Thousand Oaks.

In 2018 Heather was charged for battery and domestic violence against a police officer. She allegedly punched three deputies and threatened to shoot them. This all happened after Heather’s brother called the police on her because she heard her and her boyfriend fighting and was scared for her life.

In June the same year, she was arrested again for a battery.

In 2019 she was sentenced to a 30-day stay in a mental health facility.

Her friends say that she is trying to overcome her addiction completely this time and that her parents Bill and Diane came to live with her in Thousand Oaks.

Het break up with Hossier is a part of the healing since he is also known for his substance abuse.