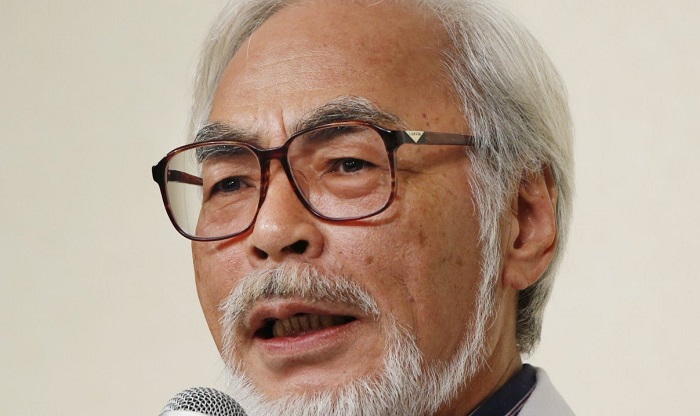 Hayao Miyazaki is a know animator, screenwriter, artist and filmmaker from Japan.

He is a co-founder of a studio called Studio Ghibli that is known for its high-quality anime movies. He is one of the most admired people in the world of animated feature films.

He is known for his movies such as Princess Mononoke from 1997, Kiki’s Delivery Service, Spirited Away from 2001 which got the Academy Award for Best Animated Feature which was a huge accomplishment for him.

Miyazaki’s work is full of references that talk about the relationship between humans and nature. The lead characters in his movies are also often young girls or women.

Hayao Miyazaki was born on the 5th of January in 1941 in Akebono-Cho, located in Bunkyo, Tokyo, Japan.

His father is Katsuji Miyazaki and he was a director of a company Miyazaki Airplane. He has 3 brothers and he is the second oldest.

In 1945 his family had to move because of the bombing in Utsunomiya. They were evacuated to Kanuma. At the time of the bombing, Miyazaki was only 4 years old.

Hayao’s mother got ill in 1947 and until 1955 she struggled with spinal tuberculosis. She passed away in 1983 when she was 71 years old. In 1947 Hayao started going to a school located in Utsunomiya.

After the first three years, the family moved to Suginami-Ku and finished fourth grade in Omiya Elementary School. He then finished fifth grade in Eifuku Elementary school.

When he was little he adored manga and wanted to draw it but he couldn’t draw people so he decided to draw planes, ships, and tanks for a while.

Some of his biggest inspirations and manga artists were Osamu Tezuka, Tetsuji Fukushima, and Soji Yamakawa.

After Hayao graduated from Omiya Junior High he started attending Toyota High School. After he watched 1958’s film Panda and the Magic Serpent he fell in love with art again.

After Hayao graduated from this high school he started attending Gakushuin University and there he was a part of a club that was similar to a comics club at that time.

In 1963 Hayao finished his university with a degree in economics and political science.

That same year he started working at Toei Animation where he was an in-between artist. There he worked on Doggie March and Wolf Boy Ken which were both released in 1963.

He also worked on Gulliver’s Travels Beyond the Moon from 1964. In 1964 he became a chief secretary of the company’s labor union.

In 1968 he was a scene designer for The Great Adventure of Horus, Prince of Sun.

While working there he was influenced by Yasuo Otsuka, another great animator. This movie was praised by the critics and was an overall success.

In 1969 Miyazaki published People of the Desert under a pseudonym Saburo Akitsu. It is a comic that was written and illustrated by Miyazaki.

He also published the Boys and Girls Newspaper in 1970 under this pseudonym. In 1969 he was an animator on The Wonderful World of Puss ‘n Boots which was directed by Kimio Yabuki.

He also worked on Flying Phantom Ship from 1969 which was an interested project for him.

In 1971 he made characters and designs for an adaptation of Animal Treasure Island. He also worked on Ali Baba and the Forty Thieves.

In the summer of 1971 Miyazaki decided to leave Toei Animation and he got a job at A-Pro.

There he co-directed over twenty episodes of Lupin the Third Part I with Takahata and dabbled in production of Pipi Longstocking inspired series.

In 1973 he wrote and animated Panda! Go, Panda“ with Takahata.

In 1973 he left A-Pro and wnt to Zuyio Eizo where he worked on World Masterpiece Theatre and the series titled Heidi, Girl of the Alps. In 1975 he went to Nippon Animation where he directed Future Boy Conan in 1978.

In 1979 he went to Telecom Animation Film where he directed The Castle of Cagliostro from 1979. In 1981 he directed few episodes of Sherlock Hound.

In 1983 he published a novel The Journey of Shuna. Soon after this Miyazaki started working on ideas to make an adaptation of a comic book Rowlf which he presented to TMS.

He also proposed another project titled Warring States Demon Castle but both of them were rejected by the company.

He got funded only for his manga Nausicaa of the Valley of the Wind which was published from 1982 to 1994.In 1982 Miyazaki left Teleco Animation Film to get more creative freedom.

Yasuyoshi Tokuma encouraged Hayao to make a film out of his manga Nausicaa of the Valley of the Wind and he agreed to do it. Takahata and Miyazaki animated it at Topcraft studio. The movie was released in 1984 and made a lot of money.

After that success, he opened an office called Nibariki the same year.A year later Miyazaki along with Suzuki, Takahata, and Tokuma founded a production company called Studio Ghibli. They were funded y Tokum Shoten.

They released their first film titled Laputa: Castle in the Sky in 1986. This movie turned out to be the highest-grossing Japanese animated movie of the year.

After that, they released My Neighbor Totoro, Grave of the Fireflies, both in 1988.

In 1987 they made an adaptation of Kiki’s Delivery Service This movie premiered in 1989 and was the highest-grossing film in Japan that year.

After that Miyazaki released his manga titled Hikotei Jidai in Model Graphix magazine.

He also directed Porco Rosso which was inspired by the wars in Yugoslavia at that time. This movie was very successful in Japan and has broke several records.

Princess Mononoke was the most expensive film Studio Ghibli did at that time.This movie premiered in 1997 and it was a major success. It won the Japan Academy Prize in the category of Picture of the Year.

This movie was also purchased by Miramax Films which allowed studio Ghibli to reach the United States and it’s the audience.

In 1997 he started working on Spirited Away. This movie was also very expensive to make. This movie talks about human greed and it is considered to be one of the best movies from the 2000s.

This movie was released in July of 2001 and it won the Japan Academy Prize and also the Academy Award for Best Animated Feature. This movie is still to this day the highest-grossing film in Japan.

The same year they started working on Howls Moving Castle. The movie was released in 2004 and was a success. This movie won the Osella Award for Technical Excellence and was also nominated for the Academy Award.

In 2006 he did another movie, Ponyo. It was inspired by The Little Mermaid but it took its own form and drifted from that. This movie got the Japan Academy Prize for the Animation of the Year.

In 2009 he wrote and published a manga titled Kaze Tachinu which was very popular in his country. He was also a co-writer of Arrietty and From Up on Poppy Hill.

In 2012 he made an adaptation of Kaze Tachinu called The Wind Rises. This was inspired by Tatsuo Hori’s The Wind Has Risen. This movie again got a Japan Academy Prize and a nomination for Academy Awards. It was also the highest-grossing Japanese movie in 2013.

In 2013 Hayao stated that he will no longer produce because of his age.

In 2014 he got the Academy Honorary Award at the Governors Awards. In 2016 he started producing How Do You Live? By himself without any approval and it should be over in 2020-2021.

Miyazaki often criticizes the current industry because they don’t make realistic humans in this work.

After the release of The Wind Rises, he was criticized for being too left-leaning. He just feels that people should overcome all the national boundries.

In 2003 he refused to go to the 75th Academy Awards because of the US’s involvement in the Iraq War.He wanted to show that injustice which is happening all over the world must be broken.

He has stated that he didn’t think Donald Trump would win the election but stated that both Hillary Clinton and he were terrible candidates.

People think of Miyazaki as a pacifist, an environmentalist, and a feminist.

A lot of his movies feature anti-war themes.

Miyazaki doesn’t have a good relationship with Goro because he was almost always absent and working.