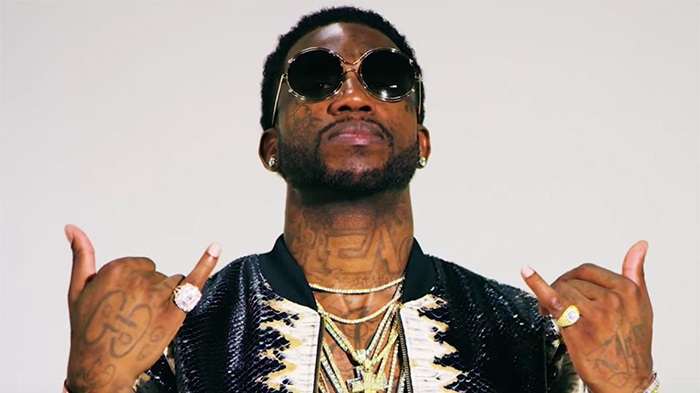 Gucci Mane is a world known American rapper, one of the pioneers if trap music – a hip hop genre born in 2000’s.

His 2016 collab with Rae Sremmurd brought him his first No.1 single on the US Billboard 100.He is one of the most influential rappers in the last twenty years.

Radric Delantic Davis, also known as Gucci Mane, was born on February 12, 1980 in a town called Bessemer in the state of Alabama.

His father is a former US military person Ralph Everett Dudley. He was stationed out of America, serving for two years in Korea. His mother Vicky Jean Davis is a teacher and a social worker. His grandfather James Dudley (Ralph’s father) was also in the military for years and has served in World War II, the same as his mother’s father, his grandfather Walter Lee Davis who served on the USS South Dakota in the Pacific.

So it can be said with certainty that he comes from a military family. However, Radric never though of making a career in military since he always wanted to make rhymes.

When his parents Ralph and Vicky met, she already had a son Victor. His father Ralph was hiding from the police who wanted to charge him for selling drugs so when Gucci was born his father wasn’t around. He was hiding in Detroit at that time. That is the reason why he has his mother’s last name Davis as his own.

His childhood was very hard because of all of the changes and the problems that constantly occurred in the family, but he always tried to stay strong through his music.

As a kid he was raised mostly by his granny from the father’s side since his mother decided to enroll a college and get herself a degree in order to provide a better life for her two sons. His grandmother is one of his favorite people on the Earth and he claims that she is the most remarkable woman he knows, besides his mother and girlfriend.

He went to Jonesboro Elementary for the first few grades.

His half-brother Victor was the person who first introduced music and hip-hop to Gucci when he was just a little kid. Victor listened to RUN DMC and Beastie Biys and he often took Radric to the concerts with him.

He and his mum moved to Atlanta in 1989. His mother had a boyfriend there and she planned to move in with him. Eventually she changed her mind and they ended up living in the hotel until she found them a new home. Now famous rapper says that he never thought this affected him until he started to tour and live in hotels again.

After some time his mum, Victor and Radric moved to East Atlanta. Radric started attending school there: Cedar Grove Elementary School. His grades were good and he was an excellent athlete. He thought that he’ll become an athlete but he always had a bigger passion for music.

After a while he joined his brother Victor in drug dealing, mostly canabis. When he was in the 8th grade he was already a serious crack and cocaine dealer. He tried his best to stay away from consuming, but it was really hard for him to do it since he was young and was searching for comfort.

He began rapping at the age of fourteen and in 2001, when he was 21 years old, he released a single “La Flare” which wasn’t distributed in school but on the streets. He was very good with people on the street so this brought him some recognition fast.

In 2002 he started his own label La Flare Entertainment in collaboration with a kniwn producer Zaytoven. Soon he was introduced to the head of Big Cat Records and he released  a single “Black Tee”. After that he made a deal with Tommy Boy record company and was preapering his debut album “Trap House” for releasing.

He released “Trap House” in 2005 and the single “Icy” which was made in collaboration with Young Jeezy and later brought a lot of controversy. The album was quite successful for an independent artist.

In 2007 he made his third album “Back to the Trap House” and it included “Freaky Gurl” remix made with Ludacris and Lil’Kim.

He signed a record deal with Warner Bros in 2009, which resulted in his second studio album “The State vs. Radric Davis”. It brought a hit single called “The Wasted”.

After he was released from jail where he ended up after the violation of his probation he released several tapes: “The Appeal: Georgia’s Most Wanted”, “The Return of Mr.Zone 6″, ” Trap Back”, “I’m Up” and many more… He said that prison and police are never going to stop him from doing what he loves.

His third album came in 2013 under the name “Trap House III” which was supposed to be the final album in Trap Hop series.

In 2013 he released another album called “The State vs. Radric Davis II: The Caged Bird Songs”.

In the summer of 2014 he released “Trap House 4” where he featured Chief Kief and Fredo Santana.

By releasing mixtapes during 2013 and 2014 (while he was in prison) he earned over $1 million dollars.

In 2016 he released a compilation album on iTunes that consisted of 36 singles.

In 2016 he was released from prison and the very next day he released his first single made in collaboration with Atlantic Records. It was called “First Day Out Tha Feds”.

He released his new studio album “Everybody Looking” in the summer 2016.

His tenth studio album is named “The Return of East Atlanta Santa” and his eleventh “Mr Davis” will come in the winter of 2017.

When he was a kid he had a relationship with his father but it was a poor one because his father rarely came to see him and after a while he found another woman and has two kids with her. After that he lost interest in Radric. He says that he never missed a male figure in his life, but many people claim that he actually is missing it nowadays because in his songs he oftenly gives away secret hints.

He is engaged to Keyshia Ka’oir. She is a director of many cosmetics and fitness lines and she is in relationship with Gucci for 7 years. She is a remarkable woman who continued to date him after he went to jail a few times. She had to stay alone a lot and Gucci says that he is very happy that he has such a loyal woman.

He also has a ten year old son which he aknowledged in his autobiography. He doesn’t talk a lot about his mother and rarely addresses her.

Gucci learned to read very young because his mother, who was a teacher, taught him to read by reading the Bible to him and listened to him while he read it to her.

He made a guest appearence on many songs of other known artists such as “Boom Boom Pow” by The Black Eyed Peas and “Obsessed” by Mariah Carey. This were some of his small ways to get any recognition.

In 2013 he erased his Twitter account after a big feud with artists signed to his 1017 Brick Squad label. After a few weeks he apologized to those artists, fans and the family saying that he will go on rehab and all of his actions were connected with his drug abuse.

In 2013 he appeared in “Spring Breakers” with Selena Gomez.

He released his own clothing label “Delantic”.

He was arrested many times. First it was in 2001 when he was charged for the possesion of coccaine and gained a three months sentence.

In 2006 he served a 6 month sentence for aggravated assault.

In 2008 he violated his probation and was sentenced for a year in prison. He came out in 2010.

In 2011 he was arrested for attacking his fan. Later that year he was arrested again for posession of a weapon. Due to many charges he faced he pleaded a deal in 2014 and was released from prison in 2016.

Hec released his memoirs “The autobiography of Gucci Mane” in 2017 and was co-authored by Neil Martinez Belking. He started writing it in prison in 2014 and continued it until his release in 2016. In the book he admitted that he has a ten year old son and he made a promise that he will change his life to better. This book has been talked about a lot since it contains many controversy that people thought was never going to be addressed by himself.

Gucci Mane is an Anerican rapper who earned a lot of money after releasing over 10 albums and a lot of mixtapes. He is notorious because of his bad temper and the violent acts he commited over years, which included drug posession, traffic violations, assaults with deadly weapon and more.

After getting out of prison in 2016 he decided to improve his life and forget the bad past, but his nowadays social media say something else.