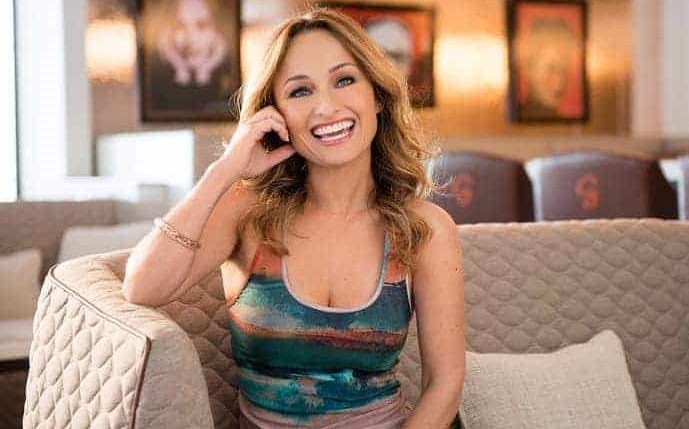 Giada De Laurentiis is a very respectable American chef, writer, and television celebrity whose fame brought her to run her own Food TV Show called “Giada at Home”.

She became more famous worldwide once she decided to step out of the norms and create something new and creative.

But Giada is a very versatile TV personality so she often contributes and co-hosts several NBC Today’s shows.

She said that once she wanted to have a career in hosting, but this didn’t work out for her the way she thought it would, but she found some fantastic ways to create a business in other ways.

She is also a skilled businesswoman who found a way to enlarge her business by founding her own catering business which operates under the name “GDL Foods”.

She wants to be one of those versatile women that improved their business significantly only by becoming somewhat more independent.

Giada is one of a few chefs that can say that they won the Daytime Emmy Award for Outstanding Lifestyle Host.

She was born as Giada Pamela De Benedetti on August 22, 1970, in the capital city of Italy called Rome.

Many people attribute her cooking talent to the fact that she was born in one of the most beautiful cities in the world – a city where a lot of food was created for the first time.

Giada is the eldest child in the known movie family De Laurentiis. Her mother is an actress Veronica De Laurentiis and her father is a producer called Alex De Benedetti.

They have both had a lot of success over the years and this made their daughter’s life much easier, but she never relied on that and she worked very hard on her own career.

Her mother Veronica and her father Alex got married in 1970 but they got divorced after a few years. This was a hard period for Giada, but she was always trying to stay strong and finish her education so she can start a proper career.

Giada’s most precious memories of Italy are the ones she gained at her grandfather’s restaurant which was named “DDL Food show”.

She says that she remembers the smells no matter how young she was – this inspired her to work with food and become a true chef.

The divorce of her parents resulted in Giada’s migrating to California, with her mother. All of the children, including Giada, took their mother’s surname De Laurentiis.

They seemed to be well connected with both of their parents, but they wanted to support their mother.

She had a happy life in Southern California and became a student at Marymount High School in Los Angeles. She worked very hard and had a serious idea of a business that she wanted to have.

After finishing high school she enrolled at the University of California, located in Los Angeles. After years of studies, she received her degree in the area of social anthropology. It was in 1996.

She grew up with her sister Eloisa and brothers Igor and Dino who were all younger than her.

Although she gained her diploma she never felt that she could have a career in social anthropology.

She knew that she was destined for something else and since she was always passionate about cooking and picky about food.

That is why she decided to give it a try in the culinary dreams and she was not mistaken. She said that food has a very big strength that she cannot neglect or deny since she had always been very connected to the feelings that she felt while eating her favorite food and smelling the freshly cooked meals.

She can be very proud of her work because her two TV shows called “Giada at Home and Weeknights with Giada came to No. 1 on The New York Times Best Seller list.

She became a student at Le Cordon Bleu Culinary Academy in Paris, trying to become a skilled pastry chef. It was a very interesting journey and she said that it was a bunch of trials and errors until she actually gets the right results.

Finishing this Academy gave her the opportunity to start working in American restaurants on the position of a chef. She said that she always wanted to have her own restaurant and a franchise, but she had to start small and she worked for someone else.

She began working at a very notable restaurant called “Spago” which was owned by Wolfgang Puck. Giada was very proud of this being one of her early positions since it launched her into the world of more popular ones.

In 2002, after she got an opportunity to work on the styling of a piece in Food & Wine magazine she was contacted by the producers of the Food Network who liked her way of cooking and representation.

She said that she always liked to design things and that’s why being a part of the magazine was a fantastic idea to her.

She began hosting a cooking show titled “Everyday Italian” in 2002. It was aired on Food Network. Laurentiis started to gain a lot more attention over the years since her show became much more popular.

She was one of those people that easily became everyone’s favorites because they have a warm smile and nice manners.

This was not comfortable for her at first because she didn’t want to work in the show business like most of her family members but she eventually started enjoying it very much although the first episodes weren’t showing her skills because of her jitters.

In 2005 she published her first cookbook named “Everyday Italian: 125 Simple and Delicious Recipes”.

In 2006 Giada De Laurentiis started hosting a highly viewed show called  “Behind the Bash”. The show was exclusively focused on showing how it is like to take care of the catering of major events like the Grammy Awards.

She was becoming much better with TV shows and suddenly gained quite a lot of attention there as well.

This show focuses on local culinary destinations in cities like Seattle but it also takes viewers to places she privately likes. She enjoys going to restaurants a lot because she always gets to try out something new, but the best experience for her will always be cooking.

In November 2006 she starred in an episode of Iron Chef America, in a team with Bobby Flay. They competed against   Rachael Ray and Mario Batali and lost.

In 2007, she was honored to become a presenter at the inaugural Food Network Awards.

The same summer she was hired to make a Food Network special called  Giada in Paradise.

This was an extremely happy experience for her because she visited two beautiful places: a city of Santorini in Greece and Capri in Italy.

Traveling and discovering a bunch of different foods and countries is very exciting for her and she wishes that she could spend a bit more time outside of her hometown. She is in love with European culture because her family originates from there.

Giada De Laurentiis appeared as a guest judge on the 3rd season of a TV show called The Next Food Network Star. The show was broadcasted in 2007.

The year 2008 brought a very big honor for her since Giada won a Daytime Emmy Award in the category of Outstanding Lifestyle Host.

She was very proud of it and said that this is one of the most affirming things she ever got in her career because it lets her know that she is doing a good job and, more importantly, being noticed by other professionals in the category.

In 2008 she started her collaboration with Barilla Group and it resulted in the launch of the 1st Barilla’s gourmet line. The line was launched as Academia Barilla line.

Also the same year she started filming her new show called “Giada at Home” which showed how she cooks at home for her friends and the family. That is why the stage is very similar to her home.

She became a judge of the Food Network Star in season seven and was again paired with Bobby Flay. She continued her work at the same show in season 8 but this time in the role of a team leader.

In 2009, De Laurentiis started voicing the animated character of “Paulette”, which appears on the show, Handy Manny.

In 2010, she has launched her own kitchen supply line which could be exclusively bought only in Target.

She was also voted into the list of   “Sexiest Moms Alive” by CafeMom.

In 2010 Giada became a mentor to the finalists The Next Food Network Star and has appeared a lot of times in it.

That is when she entered the restaurant business, by opening her first restaurant, called GIADA, located in Las Vegas.

The menu of the restaurant consists of Italian food with a South-Californian accent. The restaurant is made in a way that the visitors can watch the chef make food for them.

In 2012 she was inducted into the Culinary Hall of Fame which was a huge honor for her. She almost cried on the event and thanked everyone who had anything to do with it.

In 2012 she collaborated with Alicia Keys on the Citi Private Pass.

She also starred as Carrabbas Italian Girl the same year.

She was in a commercial for Hersheys “Air Delight”.

Because of her beauty and charming personality she was chosen by Clairol to advertise for their Natural Instincts hair color in 2012 and 2013.

In 2018 she gave voice to the character of Giada in a Scooby-Doo movie and it was a great experience for him.

In the summer of 2018, she opened a restaurant and named it GDL Italian by Giada. It worked very well and had many guests being satisfied and leaving great comments in the median

She is involved in a lot of health education campaigns that raise awareness about serious medical conditions. That is why she was involved in “Stand Up 2 Cancer” in 2013.

Giada is a brand ambassador for Oxfam America which tries to help end poverty in the world.

She is Roman Catholic by religion.

As for her personal life she was married to a fashion designer named Todd from 2003 until the finalization of the divorce in 2015.

They have a daughter together and her name is Jade Marie De Laurentiis-Thompson. She was born in 2008 and gained her name after her own name Giada but in the English version.

After she divorced her ex-husband there were rumors that she was dating Bobby Flay, a known chef but it was never confirmed.

She has been dating a TV producer Shane Farley since the divorce.

She is close to her sister named Eloisa, who is a makeup artist, and to her brothers Igor and Dino Alexander.

Her family suffered a great tragedy when her brother Dino Alexander, a film editor who worked in Hollywood cinematography has died of melanoma.

When asked about her favorite TV show she mentioned “Keeping Up With the Kardashians”.

She likes another cuisine too and her favorites are Chinese and Japanese cuisine.