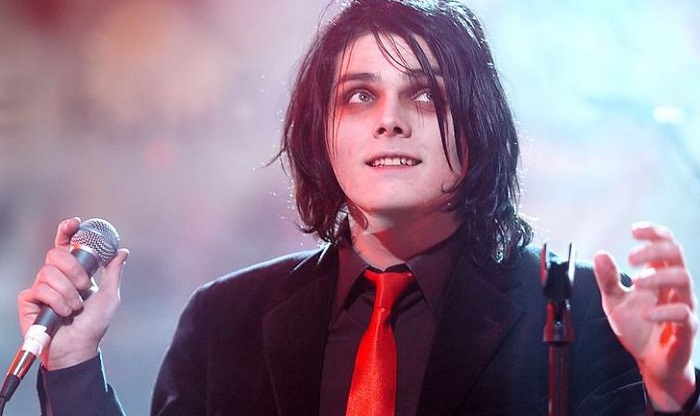 Gerard Way is the name most people connect only with the name of a singer for the rock band named My Chemical Romance but he is so much more.

He is a skilled songwriter and the writer of comic books whose creativity has no limits. Gerard is also a fighter for the rights of people who are considered outcasts from society.

He was raised by his parents Donna Lee Way and Donald Way. His family originates from Italy and Scotland so he shares both if the ancestry.

He grew up in Belleville, together with his brother Michael, more known as Mikey. They always got along so it is not surprising that they continued their work together in the group.

He found interest in music from an early age and was involved in many school musical productions like for example in Peter Pan musical where he had the lead role.

He had a very close bond to his grandmother Elena who was a creative artist and a big influence on Gerard. She spent hours teaching her grandchild to sing, draw and perform on stage without fear.

Gerard became a huge fan of Bon Jovi and the band members became his role models. That is why he turned to rock music in the first place.

He had a very traumatic experience when he was 15 when he was forced to lie on the floor and had a gun pointed at his head. He later realized how influential this event was for his work and later problems with alcohol.

He was a student at Belleville High School from which he graduated in 1995. At that period his love for comics grew to the level that he wanted to make a career in the comic-book industry.

That is why he enrolled in the School of Visual Arts in New York. He improved his skills even more and graduated from there with a degree of Bachelor of Fine Arts. It was in 1999.

Although he was a huge fan of music and played the guitar with his brother Mikey, he never turned up to be a skilled guitarist. He idolized Iron Maiden, Queen, Morrissey and The Smiths so he at first considered a career as a guitar player but failed.

That is when he turned to make comics. He started working at Cartoon Network as an intern and witnessed the September 11 attacks which became the turning point of his life.

He was emotionally hurt by the event and decided that he has to change his view on life and enjoy what the world has to offer.

Interestingly, his first song was written as the consequences of the September 11 attacks. He named it “Skylines and Turnstiles” and that will be the first song of his new band.

The band “My Chemical Romance ”  was founded in 2001 by its frontman Gerard Way. He was soon joined by the drummer Matt Pelissier and a guitarist Ray Toro.

The name of the band was created by his brother Mikey who later also became a band member.

They had no place to perform their music so they recorded their first two songs in the attic of Pelissier’s house. Themselves called these tapes “The Attic Demos.”

However, they had no trouble finding a record label that would release their first album so they released their debut album through Eyeball Records in 2002.

Geoff Rickley from Thursday was a big help for the band and he motivated them for further work. This was a great motivation for the group because they knew they were recognized as one of the new hopes on the British alternative scene.

The band gained recognition after being booked for Big Daddy’s event which helped them enter the center of rock music.

The band successfully gained more and more fans online by offering free downloads on many social platforms. They had a great interaction with their fans over media and wanted to get information from the first hand.

In 2003, the band was offered a contract with Reprise Records so they went to the studio and started making new music for their following album.

The album came out in the summer of 2004 and was titled “Three Cheers for Sweet Revenge”. The album eventually went platinum.

In 2005 the band was invited to be the opening act for Green Day on their tour in the United States. This was a huge thing for them since Green day was already established as a world-known group and earned enormous money from music.

In spring 2006, My Chemical Romance released an album titled “Life on the Murder Scene”. It was their live album released in 2006 through a reprise record label. The album was completely produced by Howard Benson.

The album gained credit for its sound and entered the US Billboard 200 chart on No.30 which was considered as a great spot for the beginning. It was also received well in Australia where it came even higher.

My Chemical Romance began a collaboration with a known producer Rob Cavallo in order to release their third album named “Welcome to the Black Parade” in 2006.

The band later often performed under the name “The Black Parade”, wearing black costumes and performing in a different manner than usual.

The single “Welcome to the Black Parade” was released in the autumn and this song became their huge hit. It went up to No.1. on UK charts. The single was also a hit in the US.

They engaged in The Black Parade World Tour where they amazed the public with heavy use of pyrotechnics.

In the spring of 2007, Gerard’s brother Mikey left the tour for a few months to go on a honeymoon with his wife Alicia so he was temporarily replaced by Matt Cortez.

My Chemical Romance was awarded for the Best International Band at the 2007 NME Awards.

Gerard became the winner of the Hero of the Year award.

In 2008, he narrated the X-Mess Detritus which is the name of a fantastic animated movie.

In 2010  he appeared in Jimmy Kimmel Live! show both as a writer and singer.

In 2009, the band released a cover of Bob Dylan’s song named “Desolation Row” which found a place on the soundtrack of a movie titled Watchmen.

In 2009 he was also involved in the making of the single for Final Fantasy VII video game.

He sang it with his friend Himuro and the duo released it by the end of 2009.

He is a huge fan of the band named LostAlone, so he took the place of executive producer of the band’s studio album titled “I’m a UFO in This City”.

In 2010, at the beginning of the year, Bob Bryar decided to leave the band. He was replaced by Michael Pedicone at the end of the year.

The band was the headline appearance at Reading and Leeds Festivals in 2011 and they were praised for their performance there.

Michael Pedicone was soon fired from the band after he was caught stealing from the group. The police were even involved and the band was furious about how he wanted to use his new position in the band.

Jarrod Alexander was chosen for their new drummer.

In December 2011, My Chemical Romance made an appearance on Gabba Gabba! where they were the Christmas Special guests with their song “Every Snowflake Is Different. (Just Like You)”.

2013 brought a huge change for the band members because they announced they parted ways and are no longer together.

The band eventually released their collection album titled May Death Never Stop You.

All the members of the band continued their careers in music.

Gerard Way worked on his solo album which was named  Hesitant Alien and which gained moderate success in both UK and the US.

He has signed to Warner Bros and released the album which incorporated British Pop into it.

In 2015 Gerard performed as a solo artist at the Australian 2015 Soundwave music festival and  Boston Calling Music Festival.

In 2016, he had released new tracks titled  “Don’t Try” and “Pinkish” which were launched exclusively.

Two years after he released a new single called “Baby You’re a Haunted House”. His brother Mikey Way appeared in the song and video. His next single called “Getting Down the Germs” was released.

His third single “Dasher”, was different from others because of the vocal from Lydia Night, the singer of The Regrettes.

At the beginning of the year, he released a song titled “Hazy Shade of Winter” which is a cover of Simon & Garfunkel’s song. It was used for The Umbrella Academy, aired on Netflix.

In 2015 he was a back vocal of the song “Louder Than Your Love” on the album “The Shadow Side” released by Andy Black.

In 2019, the band reunited for concerts in the US, Australia, New Zealand, and even Japan.

In 1993, at the age of 16, Gerard first tried to write a comic book since he was a huge fan of them and he named it On Raven’s Wings.

In 2007, he returned to the comic book writing more seriously with his miniseries named The Umbrella Academy. It was released as the Apocalypse Suite through Dark Horse Comics.

His Apocalypse Suite became the winner of the 2008 Eisner Award in the category of Best Limited Series. His following installment is titled Dallas and was released by the end of next year.

Gerard Way started his collaboration with another artist called Shaun Simon to create a new comic-book series under the name “The True Lives of the Fabulous Killjoys”.

In 2013, he directed several original series The Aquabats! Super Show! on the Hubs and his brother Mike appeared in it. This episode received a nomination for Daytime Emmy Award for “Outstanding Writing in a Children’s Series”.

In 2014, he debuted in the Marvel Universe with his work in Edge of Spider-Verse, in which he wrote about the Spiderman’s alternative Universe.

Gerard has a long history of alcohol abuse and fought drug addiction for a long period of time.

He was dating Eliza Cuts around that period but ended it in 2007.

He married Lyn-Z, bassist of a band named Mindless Self Indulgence. They got married at a concert in Colorado by the ordained minister who was a member of the staff.

In 2009, Lyn gave birth to their daughter  Bandit Lee Way.

He was often nicknamed Gee and  Uncle Jiggy.

He was very close to his maternal grandmother Elena Rush and has written an emotional song about her.

His natural hair color is dark brown but he is a huge fan of changing colors so he has dyed his hair in blonde, red, green and other.