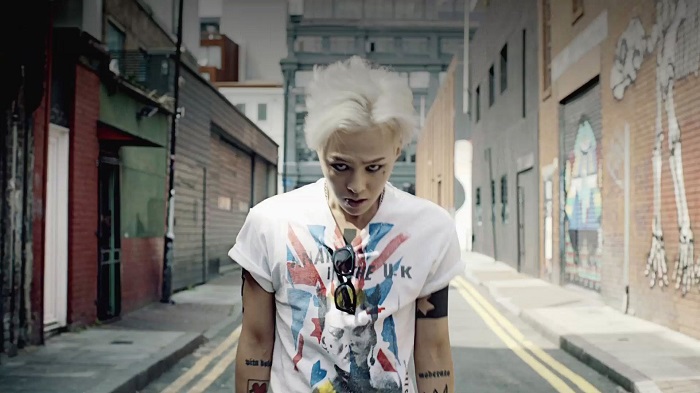 G – Dragon is the stage name of a famous South Korean rapper Kwon Ji-yong, songrwriter and a producer.

He is very known for his great fashion style and he has a great influence on South Korean fashion scene.

He was born on August 18th, 1988 in Seoul in South Korea. His career started very early: when he was only five years old he became a member of a music group called „Little Roo’Ra“. They release one Christmas album and after that their contract was terminated and Kwan took it very hard. He was just a child so he took it so serious that he decided to stop singing.

His mother convinced him to pursue his talent further so he continued his singing career.

After a while, a scouting company called SM Entertainment approached him and took him to training. He was trained by them from the age of eight to his 13th birthday and after that he was excellent not only in singing but also in dancing.

He was a huge fan of an American group called Wu-Tang Clan and that caused him to get interested in rapping. He started taking classes and in 2001 he became the youngest South Korean rapper by paricipation in a hip hop album named „Flex“.

After that he signed a contract with a record label but it took him a few years to start making music.

Kwon found another trainee named Dong Young – bae who helped him pick his stage name: G-Dragon. Under the stage name  „GDYB“ he released a few songs and made some appearances on other artists’ albums.

His record label „YG Entertainment“ decided to make a boy band. Kwon got in touch with his schoolfriend Choi Seung – hyun and the two of them became members of a 6-member boyband „Big Bang“.

Soon they lost one member and this quintet released their first singles. G-Dragon has a solo song on their first album. In 2007 he released „Always“ and G-Dragon got more involved in production of bands’ albums. He started to work on his solo career in 2009 and was a guest on a song „Super Fly“ by a singer Lexy. He also collaborated with a boy band W-inds, from Japan.

„Heartbreaker“ is the name of his first solo album, and it came out on his birthday. He sold more than 200 000 copies of his album and won the title „Album od the Year“ . In 2010, an American music start Flo Rida, accepted his invitation for featuring in G – Dragon’s album.

At the end of 2010 he collaborated with T.O.P. and they released an album together.

He released another song in collaboration with Park Myung Soo in 2011. It was the second most downloaded single that year.

In 2011 he made his first appearance at the MTV EMA’s.

In 2012 he was named the best K-Pop singer by Spin Magatine. He walso won an award for „Best Male Solo Artist“ at the 14th Asian Music Awards.

He was the second Korean solo artist to have a world tour.

After that, he returned to the studio to make his second album which featured Missy Elliot, a very popular female artist.

In 2015 he became a face of Airnbnb () and Shinsegae. He released his album named „Kwon Ji Yong“, which is his real name, on USB flashdrive.

He is also a great philantropist, donating money and having concerts for raising awareness: he helped to build a school in Nepal, donated food to malnourished children, gave money for hospitals.

He built a hotel as a gift to his family, so they can support themselves.

Distinctive Features: earring on one ear

„Ji“ in Korean means the same as „G“ and „Yong“ means dragon.

Sony Pictures accused G-Dragon for plagiarism on two songs, claiming they were very similair to FloRida’s song and a song of a British group „Oasis“.

His concert in 2009 caused controversy and The Korean Ministry of Health and Walfare investigated him to determine did he break laws during his obscene performance.

Before appearing at the MTV EMA’S he was involved in a scandal: a test on his hair came positive to marijuana but he was not indicted because it was his first offense.

He was a model for Hyundai.

He endorsed Nike and Kappa.

In 2014 he launched his own jewelry collection.

He became an ambassador for Chanel in Korea.

G Dragon is a Korean rapper who built his fame not only in the music industry, but also in the fashion industry. His estimated net worth is eight million dollars.