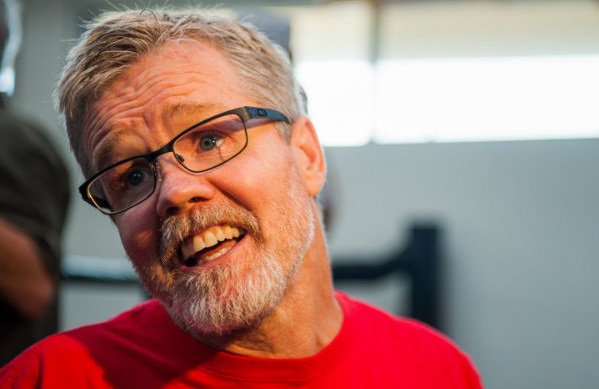 Freddie Roach is an ex professional American boxer who became more known for his skilled career as a boxing trainer.

That is why he is often spoken as he is one of the top boxing trainers ever in America.

He is known for many nicknames and the most used ones were Master Roach and La Cucaracha. But his top nickname is “The Choir Boy”.

Freddie Roach was born as Fredderick Steven Roach on March 5, 1960 in a town Dedham in the state of Massachusetts in the United States.

Freddie was connected to boxing from an early age. His father Paul Roach trained him from his youngest years. His father Paul was a very strict father who wanted his sons to have the career he never had himself.

His mother was a judge for pro fighting.

Freddie had two brothers: Joey and Pepper, who were also trained by their father and who also had their own boxing careers. He was always very close to them.

When he became a teenager he showed awesome skills in this demanding sport and soon became interesting to a lot of boxing trainers who searched for their new star.

He was a dominant boxer in Northwerstern New England amateur boxing circle and had not one lost fight. He was pretty well-known and spent a bunch of time talking to the media, doing things he loves.

In 1978, Freddie turned to professional boxing in the lightweight division. Freddie was a very good boxer and he won all his first ten matches.

In 1982 he had a very important match in the Boston Garden against Rafael Lopez, a known Mexican boxer who was on the peek of his career at that point.

It was the same night when both of his brothers, Joey and Pepper, won their matches at the same time on the same event. The three brothers became an interesting topic in the boxing circles.

After joining several championships, some with more success and some with less, Freddie Roach decided to retire at a very early age. Although he tried to fight six more times, he lost five fights out of those six.

The reason for his early retirement lies in the fact that he has Parkinson’s disease which ultimately led him to worsen his motor skills.

After he retired, he tried to find work in other areas, so he worked in telemarketing and he was even a busboy for a while, but he was never satisfied with these jobs since they were very calm and he was used to boxing.

He was trying to find a job that would return him to the world of boxing or MMA so he eventually found it in training. It was a big thing for him, who knows where he would be if he hadn’t found this.

Freddie joined Eddie Futch, his own ex trainer, as his new assistant although he wasn’t paid for it but he felt good in doing what he loved.

He started helping Eddie in 1986 but he stayed on this job for five years since it gave him great pleasure and he was really good at it. In fact, he was great at it and he started receiving pay for it so he became more financially secure.

In 1991, he was hired by Mickey Rourke, a known Hollywood actor, to train him in Hollywood and he accepted his offer.

Four years later, Mickey stopped boxing but he gave all of his gym equipment to Freddie, who was very happy to receive it and who decided to start working as a trainer on his own.

He transferred that equipment in his “Wild Card Boxing Club” which is a gym situated in Los Angeles. His brother Pepper is working there with him, handling the club as if it was his own.

Fresdie soon became a very popular trainer and a lot od his boxers became champions. He tried improving boxing skills of his boxers in the way nobody else did and he made several of them into champs.

He is especially proud of his work with Manny Pacquiao who eventually became a world champion. He and Manny have built an especially close relationship and Manny’s boxing skills rapidly improved.

In 2007, Freddie trained a known American boxer Oscar De La Hoya who was prepairing for his fight against another super-boxer named Floyd Mayweather.

Virgil Hill, the world boxing champ, was one of his proteges and the first one to become the world champion. It was a very important thing to him.

Until today, it is known that Freddie trained at least 28 world champions. One of his latest boxers was Kid Yamaka.

He also collaborated with the greatest of them: Tito Ortiz and Anderson Silva. Their names are enough, their titles are the most important in the boxing world and both of them have several titles.

In 2010, he was called out to train Georges St. Pierre who was preparing for a very important fight against Josh Koscheck. He successfully trained him to win the fight.

As for his personal life, the public is aware of Freddie’s disease which shortened his boxing career. He never kept this a secret and he enjoys sharing his life with the media.

Freddie is fighting his disease with high optimism and controls it through medication. Most of his doctors think that he slowed the progress of his illness due to his active training routine he has while training other boxers.

That means that he controls his disease better since he works out a lot himself.

Freddie was awarded for his great work as a trainer by being inducted in the “World Boxing Hall of Fame”. He was very proud to receive this title because he had shown his strength to overcome his disease.

In 2008, he was given the “Lifetime Achivement Award” for his training work. This was an important moment for him because he was finally ackowledged amongst those who are important.

In 2012, he became one of the trainers of world champs who are inducted into International Boxing Hall of Fame.

In 2013, Freddie was also an inductee in “Nevada Boxing Hall of Fame”.

His Wild Card Boxing Gym is a very popular gym and it soon became a tourist attraction in Los Angeles. Every tourist who likes boxing wants to see Freddie at work. Today a lot of celebrities like to come and train there. Most common visitors are Mark Wahlberg and Christian Bale who are both fans of boxing. Sylvester Stalone also likes to come there but not as often.

Other than two brothers Joey and Pepper he also has two sisters:Julie and Cindy. His mother’s name is Barbara and she works in his boxing gym too. She is quite old but likes to work at reception.

Freddie and Manny Pacquiao seem to have some sort of father-son bond which helps them both in life.

His childhood wasn’t that simple since his father had dreams of his children becoming champions. His dad was known to beat the ones who didn’t want to fight so he was sometimes very abusive.

Paul, his father, hit his wife and children so the children hit other children because they copied that behaviour.

Today he lives in the flat just next to his precious gym and has saved enough money for a potential crisis or the loss of the ability to work.

Freddie was very devoted to his mother Barbara who was also very sick: she wrnt through chemotherapy twice already (breast cancer and uterine cancer), and the third diagnosis was the pancreas cancer.

She died in 2018 and left Freddie in a very sad state. He loved his mother very much because she was always there for him and she defended him a lot when he waa a child and his father Paul became agressive.

Robert Duvall, a famous actor, is a big boxing fan and a good friend of Freddie. He is also a fan of Manny’s so he was often there when Manny trained.

Freddie owns two cars and one of them is a Mercedes Benz. He enjoys cars but doesn’t want to spend too much cash on them.