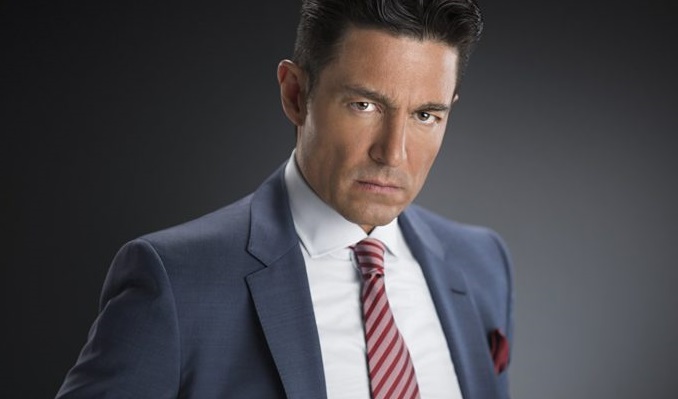 Fernando Colunga is an actor from Mexico mostly known for his work in popular telenovelas.

He is very handsome and he has a lot of romantic roles because of it, which later helped him get famous outside of his birth country.

He is one of the most wanted actors and has a huge female fanbase.

They are all very active on his social media and get invested in what he does daily.

Fernando was born on March 3rd in 1966 in Mexico City, the capital of Mexico. He says that he loves his birth town, but he wishes that he could’ve helped his parents out back in the day when he was a small boy.

He holds the same name as his father Fernando Colunga, an engineer. His loving and always supportive mother is named Margarita Olivares, an auto dealer but she worked on many workplaces, from being a bartender to being a clerk.

His parents used to work hard to provide for his family and Fernando had the wish of becoming famous to help them out.

Since he was 9 years old he practiced martial arts. He was good looking from his young age and by practicing martial arts he developed a great physique. He said that just getting rid of this extra energy helped him stay focused on what he wants to do in life.

After finishing high school Fernando enrolled in the University of Mexico and graduated as a civil engineer although he wasn’t interested in anything else but acting. He said that he wanted to have a stable career going on and that after that he may actually try himself out in the world of showbiz.

That is why he also went to CEA, an educational facility also known as Centro de Educacion Artistica de Televisa where he started his education in acting.

He said that it was very interesting to get to know other people who are like-minded and to get advice from them all.

In 1988 he started working as Eduardo Yanez’s stuntman in Dulce Desafio, a known soap opera. This is what made him go to CEA in 1990 and made him gain interest in this area.

He had a role in a Mexican version of Sesame Street and with it became more known to the public. A lot of producers noticed him and predicted him a great future.

Most of his roles are based on the fact that he is handsome and charming, but he later proved to everyone that those are surely not his only qualities.

In 1992 he was in a telenovela “Maria Mercedes” produced by Valentin Pimstein and because of its popularity Fernando did a lot of episodes.

The series was made for Televisa and it was the first series in the “Maria” franchise.

He also starred in “Cenizas y Diamantes” which was aired from 1990 to 1991 on Canal de las Estrellas.

The main protagonists of this popular series were María Sorté and Alfredo Adame and Fernando had the role of Valerio in it.

In 1994 he starred in a soap opera Marimar. The series was produced by Valentín and Verónica Pimstein and it was released on Televisa. The basis of the series was made on a popular radionovela.

Fernando played the role of Engr.Adrian Rosales in this series.

He was also in the movie “Kiss me on the mouth” that year. He said that it was good to change his setting a bit and work more on movies instead of TV series, but his future still lays in telenovelas – it’s what he likes.

A year later he started playing the character of Lieutenant Raul Gutierrez is Alondra.

In 1995 he got the part in a telenovela “Maria la del Barrio” where he had his first leading role. He played Luis Fernando de la Vega. This telenovela made him very known to the public.

After that, he was in “Esmeralda”, which was airing in countries like the Czech Republic and Indonesia. This series was shown in 170 countries worldwide and it was a success.

In 1997 he was in a movie Original Sin Not with Chantal Andere, where the two of them played Bill and Jenny.

In 1998 he was in La Usurpadora with Gabriela Spanic and Juan Pablo Gamboa. He played Carlos Daniel Bracho.

In 199 he was in Nunca Te Olvidare, made by Edith Gonzalez.

A year later he was in Abrazame Muy Fuerte, another telenovela. In it, he played Carlos Manuel Rivero. He won two awards for it, the Los Heraldos award and TV y Novelas award. This telenovela was the most successful one of the year.

In 2001 he was in Navidad Sin Fin where he played an ugly and poor man.

A year late he was in Amor Real wit the role of Manuel Fuentes Guerra, a bastard son. This telenovela was produced by Carla Estrada and had an extremely high rating in Mexico.

In it, he worked alongside actors like Adela Noriega, Helena Rojo, etc.

In 2003 he won another TVy Novelas Award in the category of Best Actor for his role in “Amor Real”.

After that, he had a small hiatus and then did Death Trap.

In 2005 he returned with Alborada, another telenovela produced by Carla Estrada.

He again got the Best Actor award for it. He was so happy to see that he is finally getting the appreciation many people were giving him, but this time by the critics and those who actually have a very big role in the world of series.

In 2007 he was in a soap opera Passion that was also produced by Carla Estrada.

In 2008 he was in Manana Es Para Siempre that was produced by Ricardo Diaz.

He was in another telenovela produced by Nicandro Diaz in 2010. It is called Soy Tu Duena.

In 2011 he again won a TVy Novelas Award, again in the category of Best Actor.

In 2012 he starred in Porque el Amor Manda with actors like Claudia Alvarez, Blanca Soto, etc. It was produced by Juan Osorio.

In 2015 he was in Pasion y Poder with Susana Gonzalez and Jorge Salinas.

Aside from acting, Fernando has his own auto-parts business.

In his free time, he likes to ride motorbikes and he also loves to scuba dive. He likes all adrenaline sports. This is something that he loves since the days when he trained martial arts. It’s his biggest love.

On the shooting of “Abrazame muy Fuerte” Aracely Arambula fell from the waterfall but Fernandez helped her. She said that he saved her life. This gained him the title of “Hero”.

Many people say that his looks are probably the reason why he gets all of the nice names, but others think of it as something that he really earned by hard work.

He has a diet consisted mostly of proteins and he takes care of his health very much. He continues to practice martial arts because it keeps him in shape.

He is a good horse rider because he had to learn it well because many of his characters were riders. He said that this didn’t bother him at all and that he was actually happy to hear that he will be getting another interesting experience soon.

Because of his job he was often rumored to be dating some of his co-stars. Some of them that were mentioned were Nora Salinas, Ana Patricia Rojo, Gabriela Spanic, Edith Gonzales, and so on.

From 1994 to 1996 he dated Thalia. Her full name is Ariadna Thalía Sodi Miranda and she is a beautiful Mexican singer and actress.

In 1997 he was dating Noe Murayama for a while.

In 2000 he started dating Aracely Arambula but that lasted only one year.

From 2003 to 2004 he dated another known actress Adela Noriega. All of his relationships are under the magnification glass and the media can be very intrusive.

Fernando was dating Blanca Soto, a soap opera actress until recent rumors of their break up. They have been together since 2013 but their relationship had its ups and downs and in 2019 the media discovered that things are not as great as they seem in their relationship.

He says that he doesn’t want to make his life all about his looks because that’s where it all seems to be pointed towards.

Many people call him the Hispanic Orlando Bloom and they compare the two quite often.

He says that the comparison flatters him a lot and that he doesn’t mind it at all.