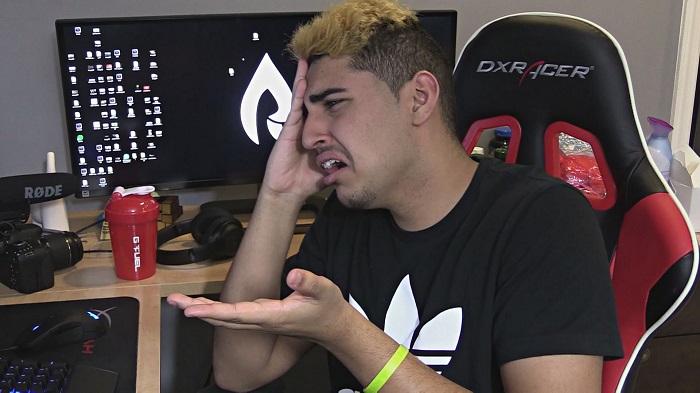 FaZe Rain, born as Nordan Shat, is an American professional gamer and YouTuber and one of the most popular members of FaZe clan, most subscribed gaming team on YouTube.

FaZe Rain posts game related videos and vlogs on his two YouTube channels that have more than 6.7 million subscribers and one billion views, combined.

The successful 21-year-old earns millions of dollars through his skill and this article will reveal you how FaZe Rain made it.

Nordan Shat was born on the 29th of May 1996 in Toronto, Canada. He lived with his parents and a sister. As a child he experienced depression when his parents started arguing. Nordan turned to his PlayStation for comfort. One day the father left without a trace and Nordan’s mother later married her former boss.

As a teenager Shat once again fell into depression after a breakup with a girl he dated for three years. He took an overdose of Advil and attempted to take his own life. He was hospitalized for a week and had to see a therapist for three years. As part of therapy he was advised to focus on a hobby. At the time Nordan was into watching YouTube.

After two years of watching YouTube, FaZe Rain started making his own videos about the one thing he was passionate about – gaming. He started sharing his ‘Call of Duty’ skills and quickly rose to million subscribers.  His skills and strategies are considered amongst the best by his colleagues.

Nordan Shat lives with his mother and a sister. He also has a step-dad, step-sister and step-brother.

Shat dated a girl named Taylor from November 2014 to early 2016. During the time they were together, she frequently appeared in his videos. In one of his vlogs, Nordan said they broke up because a long distance relationship wasn’t working for them.

Faze Rain is currently going as single since there is no mention of any new girl in his life.

Net worth: FaZe Rain has an estimated net worth of $2.5 million. He often gets sponsors for his videos. So far, he has worked with such brands as GFuel and FanDuel.

Nordan also gets an extra income from FaZe merchandise. It’s even rumored he earned some money from an alleged ownership over a successful CS:GO gambling site CSGOWILD.

FaZe Rain has an expensive taste in cars. He owns an Audi R8 V10 Plus and a Tesla Model X.

Ever since he was a child Nordan loved making people laugh. Because of that, he got into trouble with teachers a lot and was sent to the principal’s office often.

Nordan was fat as a kid, but slowly grew out of it.

Shat once got beaten up. During the incident he didn’t throw a punch, but let the guy walk away because he does not support violence.

FaZe Rain joined YouTube in December 2010, but didn’t start making videos right away. In fact, he deleted a few of his oldest videos.

FaZe Rain, also known as Nordan Shat, is an American professional gamer and YouTuber and one of the most popular members of FaZe clan, the most subscribed gaming teams on YouTube.

His two YouTube channels together have more than 6.7 million subscribers and one billion views earning Rain a net worth of $2.5 million. He earns from sponsorships and merchandise sails and drives a Tesla Model X.

Funny thing is he came to do YouTube videos after an advice by a therapist to dedicate himself to a hobby. Rain tried to kill himself when he was a teenager. His childhood was difficult since the parents argued a lot and father left the family. Nordans passion for gaming helped him through the rough years and later on turned out to be the source of his million dollar success.