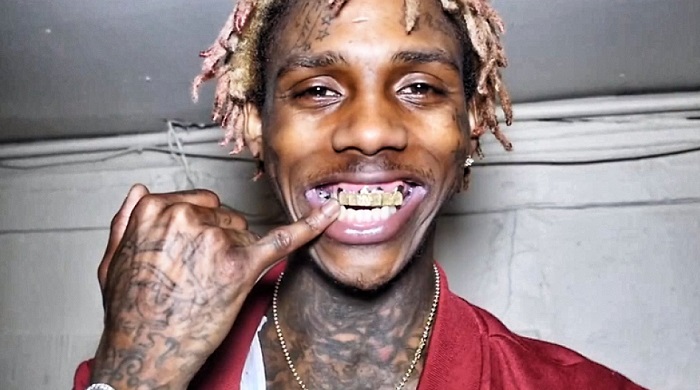 Music this multi-talented artist makes has many times gone viral on the web earning Famous a net worth many would be envious of. We’ll look into all of that in the following text so keep reading.

Famous Dex was born as Dexter Gore Jr. in Harlem, New York City, on the 6th of September 1993. His father was a US Army Lieutenant, and his mother a waitress and chef in a popular Chicago restaurant. Dex was raised in Englewood on the South Side of Chicago, where he attended first the Catholic school in Hyde Park, then the Hernandez Middle School and Paul Roberson High School.

His childhood was spent in one of the most dangerous Chicago neighborhoods that also gave birth to other famous rappers of the drill scene, like Fredo Santana, Lil Reese, and Chief Keef. It’s no wonder that before getting into rap Dex had spent some time selling drugs.

About the same time, he had started out in the music business and immediately showed his potential to be big. But the decision to get off the street for good was prompted by his mother’s sudden death in 2015.

Dex started out as a hype man in videos of his friends but quickly became recognizable enough to adopt a stage name. Famous Dex soon started making his own hip-hop sound. He gained popularity through two remixes he made in 2013. Then in 2014 Famous released his debut single ‘Bottle After Bottle’ that got almost 200 thousand views on YouTube.

That success was almost doubled in the following year when the song “Duh Dummy” collected 300 thousand views in just one week. That song was a part of Dexter’s mixtape album entitled ‘Never Seen It Coming’.

In 2015 one more mixtape came out entitled “Dexter’s Laboratory” whit several songs that became viral on YouTube, like “Hoes Mad” and “2 Times”, leading to a massive increase in his fan following.

Dex next released four more remix albums in 2016 all of which gained a lot of popularity through the web. Particularly the remix album entitled “Dexter the Robot” had more than million views on Spinrilla app after just a week of its release and is considered to be one of his best works.

Dex notably stands out from other drill musicians (drill – is a style of rap music originated from the South Side of Chicago and defined by dark, violent, nihilistic lyrics and trap-influenced beats) with positivity rather than aggression or menace, although he does keep the energy level characteristic to drill.

Famous Dex has two daughters and a baby boy born in 2017. His longtime girlfriend and the mother of his children is known in public as Baby Mamma. The pair got back together after a rough patch in 2016, when Dex was caught brutally beating her.

The incident happened in a hallway and was caught by a surveillance camera. The footage leaked on the web resulting in Famous Dex being jailed and his endorsement contract with Puma promptly terminated.

Dex apologized for his actions and in time managed to reconcile with Baby Mamma.

Distinctive Features: Tattoos on both cheeks and forehead.

Famous Dex has estimated net worth of $600 thousand, but the amount is speculated to be increasing fast considering the new long expected album.

The size of his wealth is best illustrated by the fact that Dex bought a new house and a Lamborghini in 2016.

Famous Dex does not have an official Snapchat or Facebook page, but he is present in other social media and has a personal website where he also sells merchandise.

Dex is of Moroccan, Haitian and Indian descent.

Dexter grew up in a neighborhood full of rappers. He went to the same high school as Lil Durk. Also, Dex is related to rapper Lil Wop 17.

Before his rise to stardom, Dexter was in a bad place, involved in drugs and violence. One time he got stabbed so bad that he fell into a coma and didn’t wake up for four days.

His mother died of breast cancer in September 2015 and Dex tattooed her name on his cheek alongside the breast cancer awareness ribbon. He has numerous other tattoos on his arms and neck, but his mother didn’t approve of them much and had often criticized Dexter about it.

Dexter wears braids and often changes their color. He has so far dyed them red and blond, even dark blue.

Dex identifies himself with the main character of American comic science fiction animated television series “Dexter’s Laboratory” that was aired on Cartoon Network from 1996 to 1999. Dexter’s Lab was created by Genndy Tartakovsky who also made “Samurai Jack” and recently “Hotel Transilvania”. The series centered on Dexter, a boy-genius who made a secret laboratory in the basement of his house and battles to keep his sister Dee Dee out of the lab and defeat his neighbor and rival Mandark. The similarities Famous Dex shares with the cartoon character Dexter lay in more than just the name since Famous is sort of a boy genius when it comes to music since he is known to push boundaries and bring new energy to drill style.

Famous Dex is a multi-talented 24-year-old rapper from Chicago whose music differs from mainstream drill and trap style of music by not focusing on violence and crime as much as on the creativity of youth culture. You might recognize the songs he’s most known for entitled “Drip from my Walk”, “Hoes Mad” and “Swag”.

Dexter started making his own sound in a neighborhood that gave birth to many famous rappers of the drill scene, but gave the mainstream style his own mark quickly gaining millions of followers. He has released six mixtapes and recently a debut album, earning a net worth of $600 thousand.

Famous has three children with his long-term partner Baby Mamma.