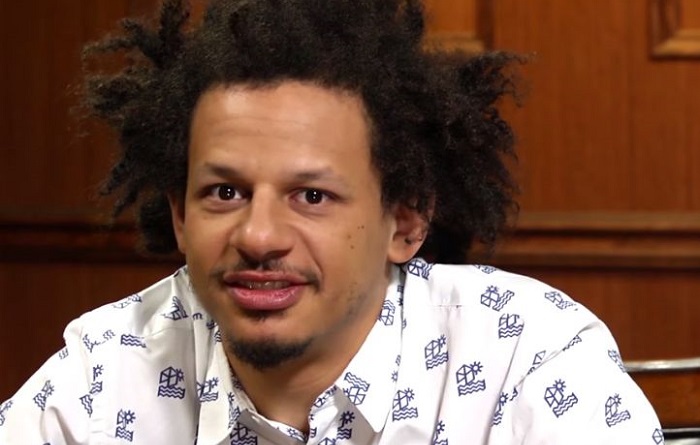 Eric Andre is a popular American comedian, actor and TV host who became known through his TV show called The Eric Andre Show which airs on Adult Swim. This show brought him worldwide recognition.

As for his other ventures he had starred in a series Man Seeking Woman and was hired to give his voice to the remake of The Lion King released in 2019.

He is often criticized for being immature and childish but he doesn’t really care about it because he finally does what he likes.

His performance is often controversial and he had been arrested several times because of it.

He was born as Eric Samuel Andre was born 0n April 4, 1983, in the town of Boca Raton, often called just Boca, which is located in the south of Palm Beach in Florida, United States.

His father is an Afro-Haiti immigrant who worked as a psychiatrist, while his loving mother was an  Ashkenazi Jewish and is a New Yorker, hailing from the Upper East Side.

After finishing his elementary education he became a student at Dreyfoos School of the Arts located in West Palm Beach in Florida.

He gained his degree from high school in 2001 and decided to pursue his music career because he was a good bass player.

Eric turned to study Berklee College of Music in Boston, in the state of Massachusetts, and he graduated from it in 2005, earning himself a degree in fine arts. He played double bass but later couldn’t find work in his niche and realized that he is more interested in comedy and acting.

He had worked several jobs and was trying himself in stand-up comedy when Adult Swim gave him his chance.

He later often mentioned how he was receiving unemployment support and was almost broke when his chance of a lifetime came with Adult Swim.

Andre’s career as an actor started somewhere in 2009 with his appearance in a fantasy comedy movie titled “The Invention of Lying” with Jennifer Garner and Jonah Hill in lead roles.

In 2010 he had a small role as a passenger in a short movie titled Thin Skin.

He created a very popular show called The Eric Andre Show, which he hosts himself, sometimes with his co-host Hannibal who is also a comedian.

This show is a parody of talk shows from the past and is very viewed although it is in the late-night program of cartoon network, in their Adult Swim program.

The show became popular very fast due to various sketches and pranks Eric pulls, and it also hosts celebrities which is a very good idea for the show.

But not all celebrities want to come into the show. Many of them don’t like the concept of his interviews and many think his show is too controversial.

When he came upon an idea to shoot this show he was almost broke so he had to watch out how he spends his money.

He rented a little place in the middle of Brooklyn and it was a kind of a bar that was totally abandoned and dirty so he and his friends cleaned it up so they can have their shooting there.

It was the cheapest set they could get so they did it with minimal cost.

After several days of shooting Andre ran out of money. Since he made all the footage but couldn’t afford the editor he decided to learn to edit himself.

It took him almost a year to learn all about the Final Cut and after that, he sends his tape to all the networks he could think of.

The only network that liked their stuff was the Adult Swim. They thought it had a future so they gave him a couple of hundreds and coupons for pizza and asked him to make ten episodes.

All the time he was trying to find his way on TV  Eric did commercials and it was the basic stuff that brought him money for living.

Sometimes he was a mascot, like for example for live events for the Geico Caveman. This was fun but he often felt like it was a retarded role. He had to visit hockey games, Lollapalooza, Yankees games and the company paid him to walk around in them with his bow and arrow.

He saved money from commercials and his other work and relocated to L.A.

The first ten episodes of his show were made in two months and they were shot in Hollywood.

Eric has two bulging discs in his spine from his teenage years which he earned by working out wrong. He also has problems with his knees so he had to undergo physical therapy for it.

His shows are very exhausting since he is always doing stunts. While on live show tour he hurt himself repeatedly.

One time his forehead started bleeding after he smashed a glass bottle on his forehead. His co-host and his friend Jonathan was shocked by it more than he did.

A common part of the show is smashing tables, and he smashes them about 20 per season. They are made of drywall, and sometimes Styrofoam when the show is on the road.

The Eric Andre Show premiered on May 2012 and soon became a hit because its main intent is to mock low-budget talk shows which were popular in the 90s.

Eric doesn’t host the show alone but with a fellow comedian named Hannibal Buress who is sometimes swapped by Andre’s friend.

Eric also made several specials of the show like as example The Eric Andre New Year’s Eve Spooktacular and  Eric Andre Does Paris.

The beginning of the show is similar in every episode. Eris is announced with “Ladies and gentlemen, it’s The Eric Andre Show!” and then Andre enters the room and starts destroying stuff like desks, furniture, and others followed by the band playing the opening song.

The show puts Andre as the lead performer who gives his monologue while his co-host Hannibal enters the room and starts making derisive remarks and criticize Andre.

Then both of them work on sketches, interviews and similar and the show ends up with a music performance.

But not an ordinary one since the musicians always have a special task. Like for example, Mac DeMarco played a theme from a Japanese video game while he was tormented by several samurais who entered the stage.

Mac DeMarco is a known indie-pop artist who can play several instruments, from bass to drums.

The show had four seasons and in every season something was changed.  The first season was filmed in a darker mode with low-quality cameras, and the second season the quality improved and Andre started wearing a grey suit.

In season three Andre had a new flat hairstyle, and in season four the band of musicians was changed.

While filming season one Andre had most of the creative freedom but he had to watch out for some things because it was a kid’s channel. That is why he couldn’t speak about suicide or drug use and had to watch about religious content.

Dolph Lundgren was his real guest in this season and all other “celebrities” in that season were impersonators.

Dolph Lundgren is a famous action movie actor and bodybuilder.

During the filming of the first season, he was physically attacked by people at the Mensa convention and was arrested for attending a town hall meeting representing a member of a fraternity and claiming that he will put beer in fountains and camera’s in the girl’s rooms.

At the same time, he was cast into the series called Don’t Trust the B—- in Apartment 23 which was canceled at the beginning of the year 2013.

He also had a small role in a comedy film named “Internship” with Vince Vaughn and Owen Wilson in lead roles.

Season 2 brought some new changes, a better quality camera, and a new announcer. The guest on this season was a beautiful Indiana born actress and a TV host Vivica A. Fox.

In 2014 his show was one of the nominees for The Streamy Awards in the category for the Best Ensemble Cast.

Season 3 guested Lauren Conrad who left the show after Andre ate his own vomit and was very offended by him and the show.

Lauren Conrad is an author and a TV personality who is also a fashion designer.

Chris Rock also appeared but he invited himself to the show because he was a huge fan. This was awesome for Andre because he is a huge fan of Chris Rock.

In 2016, in season four, Andre has lost weight and stopped bathing and wearing deodorant. It was a part of the season’s performance.

His guest was a rapper T.I. which walked off the show at some point.

Then there was a rapper Flava Flav who later claimed that the scene where the co-host Hannibal Buress kicks him in the face is a  montage. Their dispute was very public.

All of the four seasons are released on iTunes and YouTube and Hulu.

Although the show was one of the weirdest on TV it was very well accepted.

Also in 2016, he starred in Bob Castrone’s comedy movie called “Flock of Dudes” which was premiered at the Los Angeles Film Festival the same summer.

Andre also gives his voice to the character of  Luci in an animated show called Disenchantment which airs on Netflix.

He had a role in a documentary movie titled Popstar: Never Stop Never Stopping.

Andre is also known for his love life and the many relationships he had in the past.  He was rumored to be dating Amber Rose in October 2015 after she broke up with Wiz Khalifa.

The two of them started their communication over Twitter and later they met and posted their photos on their social media accounts.

Soon after he allegedly broke up with amber rose he was rumored to be dating a beautiful actress Rosario Dawson.

Andre shared her photo on his Instagram in the summer of 2016.

Nobody was quite sure about their relationship since Andre is known for his pranks but Andre confirmed it himself on Valentine’s day when he stated that they are together and that she is the most beautiful being on the planet for him.

Rosario confirmed their relationship on Stephen Colbert’s The Late Show in spring 2017. She explained that they are dating for a while now.

They have split in the fall of the same year and explained that they have stayed on good terms but they haven’t been seen together afterward so maybe things weren’t that good.

On Valentine’s day 2018. Andre posted a photo of a beautiful girl on his Instagram wall and he wished her a happy valentine’s day.

In march 2018 he posted a new photo of him and his new girlfriend and written that they are happy in love.

In October the same year, he posted a new photo of the lady, coming from her birthday party and he has bought her a giant cake for the birthday.

He was a part of controversy involving his sexuality after he kissed a male in one of the episodes of his world-known The Eric Andre Show.

He started the gay rumors duo to the fact that he made out with the policemen in that episode.

He kissed James Adomian who is also a fellow comedian so most of the fans concluded that he just did his job and isn’t running away from anything.

He is very witty and full of surprises so he does things that shock most people. That is why there will always be strange rumors about him.