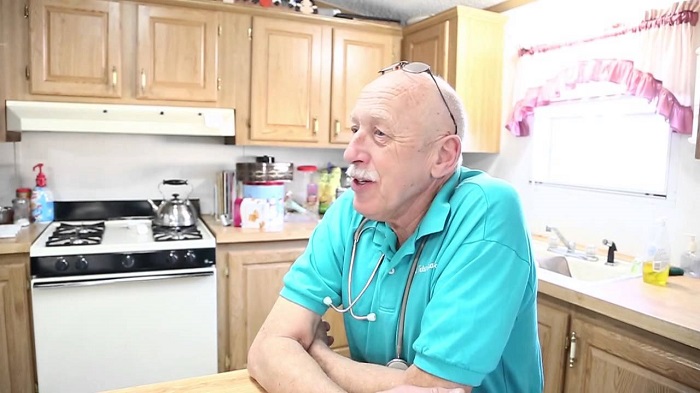 Jan Harm-Pol was born September 4, 1942 in Drenthe  in the Netherlands, and he was raised in a simple family, who charrished nature and animals and who had their own little dairy farm. He used to spend a lot of time playing with animals and spending time in nature with his two brothers and three sisters.

He was a student  at the Utrecht University, and he graduated there and became  a veterinary physician. He claims that it was one of his best decisions.

After he fell in love nad decided to get married with his nowadays wife Diane, they moved to Harbor beach in Michigan. Over ten years, dr.Pol worked for another vetenerian in his practice.

After they  moved to Weidman,which is a place also in  Michigan , they started their own practice called  “Pol Veterinary Services” which was stationed in their house. Dr. Pol says that he wanted a little more control over what he was doing so he decided to take things seriously.

Because of how dedicated he was, today he is known to wide audience as the main character in The Incredible Dr. Pol. It is a reality TV series showing on National geographic Wild.

It is all about his work, people love seeing different animals and enjoy seeing someone help them with whatever problem they have. It’s also about his family and everything they encounter with during their 14 hours working hours.

Diane Pol, his wife,  was born in Mayville, Michigan, and the two of them met when he was a foreign student on exchange at her high School in 1961, her last year before graduation.

Sadly, they had a problem with children because after years and years of trying, they couldn’t get one. So, after they got married, they adopted a son and a daughter, Kathy and Charles. The last child they adopted was their daughter Diane, who was their foster child for years and when she turned eighteen they asked her if she wanted to stay with them forever. Since they are very loving parents, she decided to stay.

His son, Charles, appears on the show and is also one of the producers, and he has huge respect for his father and his hard work, although he is not sure would he want to continue his business once his father retires.

Although he is in America almost all of his life, he still celebrates Saint Nicholas Day with his wife, never to forget his ancestry and where he came from. He sometimes visits The Netherlands and actually taked a break from his job, but only for a week or so.

Dr. Pol claims he couldn’t live without giving back to nature who gave so much to him, especially since he developed a strong spiritual connection to it in his early childhood.

Children: Charles, Kathy and Diana (they are all adopted)

Pet own: a whole bunch of dogs and cats

His favorite food is pork chops.

Dr. Pol’s children, all three of them, were raised to love animals and they often  worked at his veterinary clinic.

His favorite sport is soccer, not American football, which proves there is still something European in Dr. Pol

Dr. Pol has a big phobia: he is affraid  of heights. That is probably why he never takes the plain and is having a hard time travelling back home to Europe overseas. If he didn’t have this phobia, he says, he would spend much more time in his hometown.

Dr Jan Pol is a veterinary physician who is currently acting in a reality show about him: The Incredible Dr. Pol. He is very famous amongst the fans of the National Geographic channel.