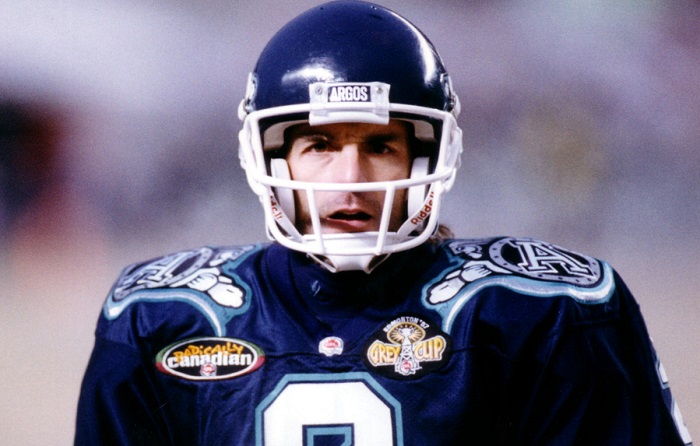 Doug Flutie was a popular NFL quarterback hailing from Maryland, United States which became very respectable due to his interesting career.

He was born as Douglas Richard Flutie, on October 23, 1962, in a town named Manchester, in the state of Maryland, in the United States.

His parent’s names are Joan and Dick and one of them is of Lebanese descent so Doug is also a par Lebanese. Although they lived in Machester where Doug was born, the family later relocated to Melbourne Beach in Florida because his father gained a better job perspective by working as an engineer in the engineering of aircraft and space crafts. Doug was only a six-year-old kid at that time.

He was a student at Hoover High School, which is a public high school in Florida and he was a member of their school football team and was a very important figure there. He was one of the most notable players who took his team to County Championships.

Because the space program became slowed down in the 70s, his family decided to move to Natick in Massachusetts in the middle 70s. This was a big step for all of them, but they succeeded in getting cozy in their new place.

He was a student at Natick High School and he graduated there. He was great in many sports, including football and baseball. Basketball was also something he liked to play.

He was a player for the Natick Redmen, today is known as Redhawks. He started out there when they weren’t so popular, and in the end, he became a true star because the team itself was in the media a lot.

He was later recruited by Boston College where he showed great skills and gained a lot of awards and trophies.

He was a proud winner of the Heisman Trophy, the National Quarterback Award, and the Axwell Club Award. This is a very big accomplishment and he was very happy to receive one.

Getting a Heisman award in 1984 was a very big thing for him since he was the first quarterback to win it in 13 years (Pat Sullivan was the last in 1971).

As a senior at college, he was named All-American and was also named as the Player of The Year. He rose to fame also because he was greatly supported by his coach Tom Coughlin who worked there from 81-83.

He became known among the nation in 1984 after he became the main player for the win of his team in a match against the Miami Hurricanes. Although he was very much focused on sports, Flutie was also focused on his education and he became one of the candidates for a Rhodes Scholarship. Although he hasn’t won this one, he gained a post-graduate scholarship by NFF (National Football Foundation).

Later, in 2008, his college revealed a statue of him doing his famous „Hail Mary“ pass for which he became famous for. The media first saw this as controversy, but it was later dismissed as a joke when the famous player said that he didn’t want to offend anyone.

Although he was great in football, professional teams wondered will he be good enough since he was small, unlike other football players. He was 5’9“ and 175 pounds at that time.

Nevertheless, he found his place at USFL (The United States Football League) because they were seeking for a great but not expensive player. He was drafted by the New Jersey Generals in 1985. He became the highest paid rookie because he managed to negotiate $7 million worth contract for a period of 5 years. His game was not impressive at that time and the USFL stopped existing in 1986.

Then he started playing for the LA Rams who later traded him with Chicago Bears. They traded him to the New England Patriots. He stayed with this team for two years, from 1987 until 1989. He found his place in the Canadian Football League where he spent over 8 years of his career.

Doing that rose his career because he soon found his best play in the Canadian League. He got used to being there quite easily because his new crew was great.

It was in 1990 that Flutie signed a big contract with British Columbia Lions. He became one of their most proud players. He had problems during his 1st season but all seasons after that were very successful.

He joined the Calgary Stampeders and was highly rewarded for his great play. He gained three times higher salary there. He was obviously quite delighted to earn more cash!

In 1992, his team won a Grey Cup and he was named as the most valuable player in the Cup.

In 1996, he won his 2nd Cup with the Toronto Argonauts and one year later he did it again.

In 1998, he joined Buffalo Bills in the NFL. During his career in CFL, he was named as MVP three times and six times he was the Most Outstanding Player in the CFL.

In 2006 he was included in Top 50 list of the best CFL players ever. This is a great honor and he got great cash for this as well. He got a lot of publicity and gained fans as well.

After joining the Buffalo Bills, after almost 9 years outside the league, he showed his form and skills and became a very valuable player for them. He was even selected in the 1998 Pro Bowl Team. In 2001, Flutie changed teams and became a player for the San Diego Chargers. He stayed there until 2005 and was the oldest player in the team.

But that didn’t stop him from scoring touchdowns. In 2005 he signed to New England Patriots and he retired in 2006.

In 2016, Doug Flutie joined the other contestants in a popular TV show named „Dancing with the Stars“. The pair finished 9th.

A video game is known as Doug Flutie’s Maximum Football will be released in 2019. This was a pretty cool video game and people enjoyed playing it.

Doug has two brothers and a sister. One of his brothers was a player in the CFL and his name is Darren. The other brother is named Bill and the sister is Denise.

He is in a long time marriage with his girlfriend from high school named Laurie. They have a daughter Alexa who was a skilled cheerleader. They also have a son named Doug Jr and he suffers from autism. That is why his parents founded an organization named „The Doug Flutie Jr. Foundation”.

All the profit earned from his cereals named „Flutie Flakes“ is used for helping kids with autism.

Doug also likes music and he played drums alongside his brother Darren. They call themselves the „Flutie Brothers Band”. It is a cute nickname and means something personal to them.

In 2015, his parents died. Both of them died from having a heart attack but apart by only one hour from each other.