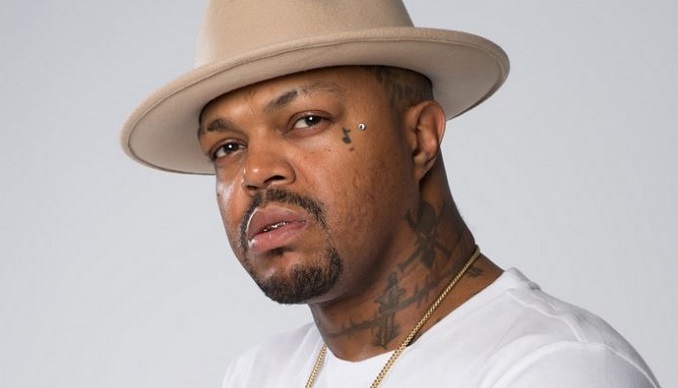 DJ Paul, whose real name is Paul Dwane Beauregard is a respectable American rapper and a DJ who originates from the state of Tennessee.

He is especially famous because he is the main creator and the driving force of a known hip-hop collective named „Three 6 Mafia“.

He was born as Paul Dwane Beauregard on January 12, 1977, in a town named Whitehaven in South Memphis in the state of Tennesse in the United States.

There is no information about his childhood.

His career in music started when he decided to take his love towards hip hop and make a career as a DJ and a rapper.

He soon succeeded in getting a job in a popular club in Memphis called „380 Beale“. He was first very serious about being a DJ.

In 1989, he and his half-brother formed a hip hop duo named „The Serial Killaz“ and Paul was the producer and the beat maker while his half brother Lord Infamous rapped in the song.

Their father helped them in starting their career by giving them money to rent a studio because they did not own any of the equipment.

They made tapes which they released in the hood and sold in local stores. In 1992, the duo released their first tape named „Portrait Of a Serial Killa“.

In 1993, they released „Come With Me 2 Hell“ mixtape. They eventually earned enough money to buy their own studio equipment and Paul started selling the mixtapes in the high school he attended.

He was a very focused teenager then. DJ Paul made a lot of his own solo tapes titled „Underground“ and they were released from Volume 1 to 16.

He became a known DJ in South Memphis and one day he was introduced to Juicy J, a known producer, who offered the duo to join his group „The Backyard Posse“.

In 1994, Koopsta Knicca joined their group after what group released „Smoked Out Loced Out“. After Gangsta Boo and Hype Man Crunchy Black joined them they decided to change the name of the group to a final product: „Three 6 Mafia“.

In 1995, they finally released their first album and did it themselves. It was named „Mystic Stylez” and was very popular. Due to that success, the group was offered a contract to Relativity Records.

At the same time, they created their own Hypnotize Minds label and gathered local artists on it. Project Pat and MC Mack were some of them.

In 2000, the group released their 4th studio album titled „When the Smoke Clears; Sixty 6, Sixty 1″ which as certified Platinum and was produced by DJ Paul and Juicy J.

In 2003, Three 6 Mafia released a very successful album named „Da Unbreakables” and in 2005 another great album „Most Known unknown” entered the Top 5 of the album on the Billboard 200 chart.

The group was also hired to make music for „Choices“ and „Choices II: The Setup“ movie.

In 2006, Paul and Juicy J were the only two remaining members of the group.

In 2008, the group released another album named „Lost 2 Walk” which was their 9th but also a final album.

The name of the album says the fact that Juicy J and DJ Paul were the last members. „Lolli Lolli (Pop That Body)” was the leading single and it was made in collaboration with Project Pat.

It was released by Sony but the duo had issues with the label which wanted to change the style of their songs os they disbanded the group.

Both of them focused on their solo careers. In 2009, DJ Paul released his first solo mixtape in over ten years. It was titled „The Weigh In”. After some time he has released his new solo album titled „Scale-A-Ton”.

He released it through his own label by the same name. The critics praised the album and it was a success.

In 2010, he released his 2nd mixtape named „Too Kill Again“ with DJ Scream and DJ Whoo as guest appearances.

Although he announced that he will release an album with the same name he never did. In 2011 he collaborated with Filmore District rapper named Ya Boy and they made a mixtape called „Pray For Forgiveness”.

In 2012 he released an album titled „A Person of Interest“ and stated that this is his favorite album and that he enjoyed working on it. That is why he made a lot of video for the singles on the album.

In 2013, Paul and Lord Infamous came to an idea to reunite their hip hop group from past: „Three 6 Mafia“.

They persuaded Crunchy Black, Gangsta Boo and Koopsta Knicca to return and so they released their next mixtape in November the same year. It was called „6ix Commandments“.

This mixtape was produced by DJ Paul himself but had many guests on it: Space Ghost Purrp and Bizzy Boe, for example. It also had two surprise guests: Project Pat and Juicy J.

In 2013, DJ Paul and Drumma Boy made a collaboration which brought a new mixtape „Clash of Da Titans” to life. By the end of the year, DJ Paul also released „Volume 16: The Original Masters” tape.

In 2017, he released another album but this time through his own „Scale-A-Ton” record label, named „Underground, Volume 17: For Da Summa”.

He also announced a project that will come to life in 2019. It will be a series of his „Underground” projects named „Dracula: Vol 18″ and it is going to be recorded in Transylvania, in Castle Dracula.

In 2007 DJ Paul made an appearance in MTV’s reality show titled „Adventures in Hollywood“, alongside Juicy J.

This showcased the relocation of the hip hop group Three 6 Mafia to Hollywood after they won the Oscar.

This series was made in eight episodes from Project Pat, Lil Wyte and from some more unknown people from their lives, like their personal assistants not as known to the public: Big Triece and Computer.

He also starred in a cooking show named Famous Food which aired on VH1 in which celebrities cooked.

He won the 1st prize and was one of the best cooks on the show. In an interview he gave in 2013 he stated that he sleeps only 3 hours a day and that he knows that it is not healthy but he is a workaholic. He works business by day and makes music at night.

In 2013 he suffered a personal tragedy when his brother, a rapper named Lord Infamous, died of a heart attack. He passed away in his mother’s house in Memphis after feeling sleepy he fell asleep at the kitchen table and never woke up.

He was in a relationship with Majda Baltic with whom he had a serious relationship and was engaged. They appeared in the „Celebrity Wife Swap” show alongside Plaxico Burres and his lady.

Paul conceals the fact that his right arm is much smaller than his left and often wears bandanas to hide it.

In 2007, DJ Paul and Juicy J decided to create their own clothing line and named it „Dangerous/Skandulus“.

This brand became the official Three 6 Mafia fashion outfit and it had numerous items included in it: from T-shirts to hats, and different kinds of accessories.

In 2012, after his engagement in the cooking show, DJ Paul released his own collection of BBQ seasonings named „DJ Paul BBQ”. It was a success so he launched another collection called „Smoked Out BBQ Sauce”.

In 2013, he was announced as the official spokesman of Sizzurp, a legal version of Purple Drank alcoholic drink.

He launched his own real estate company the same year.

In 2006, he was sued by Ramore Williams from Pittsburgh due to the beatings he received at a Three 6 Mafia concert when he was attacked by other fans followed by the song „Let’s Start a Riot”. The two sides settled and Ramone gained financial compensation for the attack.

In 2012 DJ Paul and Juicy J received a lawsuit because they never showed up on a concert they were booked for and never return the payment they received in advance.

In 2012, he was arrested after a routine search which found a Taser Stungun in his car. He has a son named Nautica Beauregard.