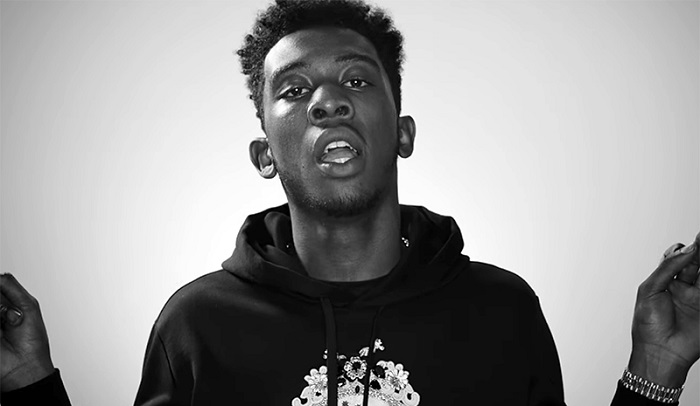 Desiigner is a musician that got involved in the music industry in 2014.

He writes songs in the hip hop genre and got famous because of his first single called “Panda” which reached the first place on the U.S. Billboard Hot 100.

His real name is Sidney Royel Selby III and his stage name was first Designer Royel, then it became Desiigner.

Although he lives here in the US and was born here, his parents aren’t from the US. His grandparents are from Barbados, same place where a very famous singer Rihanna comes from.

His family was always somehow involved in the music industry. His parents claim that he got his talent from his grandfather who was a blues singer called Sidney “Guitar Crusher” Selbly.

He spent his early years in Bedford-Stuyvesant and had a happy childhood until the age of 14.

Sidney had an interest in singing since he could walk, as his mom says. He attended the school choir and the church choir and he was getting pretty good because he actually had an education which helped him develop his singing.

As soon as Selby turned 14, he was involved in an accident. He got shot and this proved him that if he likes something, he needs to embrace it because life is short.

In 2014, when Sidney decided to get involved into the industry and start making money from his favorite hobby, he got himself a nickname Dezolo and he started to publish work under the name “Designer Royel”.

His sister didn’t like that alias so she talked him into ditching the second part and calling himself “Designer” only.

However, Sidney thought this wasn’t original enough and he wanted something that would be rare. He spent some time deciding what will he do with his stage name and ended up just doubling the “I”.

His good friend The Shell God decided to produce his very first track. It was called “Zombie Walk”.

On December 15, 2015 he did something that would make him worldwide famous in a short period of time: he released “Panda”. This was his debut single and since he didn’t know will it get famous, he posted it on SoundCloud.

However, the song became so popular that Sidney put it on iTunes shortly after and started to make money from his very first song.

Around the Valentines day of 2016, Desiigner got himself a deal with Kanye West and signed to Def Jam Recordings.

He appeared on two tracks, “Pt.2” and on Kayne’s new album called The Life of Pablo.

By now, Sidney was pretty famous and people knew his name all the way around the world. He decided that it’s maybe time to start performing.

His first big performance was in 2016 and it was on a South by Southwest music festival.

Later he was interviewed a lot and one of the interviews was with Billboard, where he said that his new and first real mixtape will be coming soon. It will be called Trap History Month.

The album will be called The Life of Desiigner.

In summer 2016, he published a song called “Champions” which is a single that presents the new complilation album that includes other guest appearances. Few od them are: Gucci Mane, 2 Chainz, Travis Scott and Quavo!

2016 BET Awards were pretty big for Sidney because he performed his hit “Panda” and this way made a TV debut.

Later that month he published a mixtape called New English and this time he decided to post it on Tidal.

He is a big fan of nowadays pop music too so he was very honored to be a part of Demi Lovato’s concert where he was her intro performance.

His track “Timmy Turner” got on iTunes on July 22,2016 and it was his last big single. This track was very popular when it came out and Desiigner says that he is looking forward to publish more of these.

He also wants to try acting out and he got invited to participate in a Netflix series called Bill Nye Saves the World. It’s a TV show hosted by Bill Nye and it discusses nowadays politics, medicine, video games, music and so on.

Sidney has an older brother he is very thankful for. He says that he couldn’t be happier that he was very supportive when he was just starting out.

When Desiigner performed at the BET Awards, he hung out with Lil’ Kim a lot. They posted several pictures on Instagram where they were hugging and looking out for eachother.

There have been rumours that these two are dating, but no one has denied or said ‘yes’ to anything. What is really controversial is that she is about 20 years older than him and is 43 in 2017, when he is 19.

He was a part of the Freshmen Class in 2016 along with other 9 rappers who were the most popular breakthroughs of the year.

Sidney is not foreign with police reinforcement.

On September 8 in 2016 he was arrested with a few other people since someone called 911 and said that these guys put a gun against his head.

Sidney and his friends had to get their cars searcher and police didn’t find only the guns, they also found a large variety of drugs, oxycodone the most. It’s a drug found in a flower called Persian poppy and it’s usually used to relief severe pain.

All of the guys later had problems because of the charges pulled against them not only for the incident with the gun, but also for illegal possesion of various drugs.

In late 2016 he was released of all charges because the police, after some investigation, realized that the pills from Desiigner’s car weren’t his. They were in the posession of his driver and they were anabolic steroids used to increase protein in cells and muscles.

A lot of artists adressed Desiigner as a very talented young man.

He claims that his biggest role models were artists that did souther hip hop and trap which is originally from Gerogia.

Desiigner gets described as rapper Future’s little brother, but he doesn’t mind that as soon as they don’t claim he is copying him. He says that it is okay if people find similarities in their styles and voices, but that it isn’t okay if they find those in songs.

Desiigner is very supportive of other artists and he claims that they have all been blessed and make beautiful music, but he has been blessed too.

Desiigner says that although his neighborhood was very dangerous, it was filled with great music. People like Aaliyah and Chris Rock come from the same place.

At one time in his life, while making “Panda”, Sidney wanted to give the song out so some other artist because he felt like he isn’t compatible with the song anymore. His manager, luckily, convinced him into doing otherwise and Desiigner kept the song for himself. If he didn’t, God knows would you be reading about him today.

Desiigner is a singer and a songwriter from the US. His estimated net worth is $5 million.